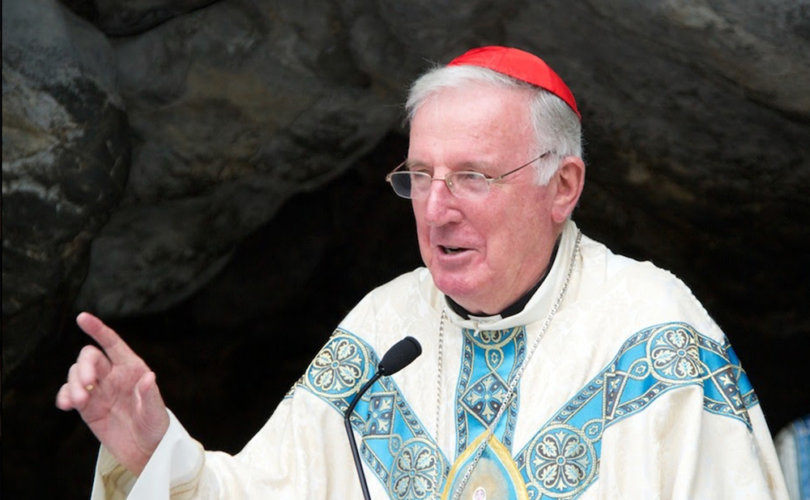 Murphy-O’Connor, 85, was the Archbishop of Westminster, and therefore England’s leading Catholic churchman, from 2000 until 2009. Born in England of Irish parents in 1932, he was ordained to the priesthood in 1956 and to the episcopate in 1977. Pope Saint John Paul II named him a Cardinal in 2001.

The Cardinal was also one of the group of clerics dubbed the St. Gallen “mafia” by Cardinal Godfried Daneels. Its goal was to radically reform the Church to make it “much more modern.”

The informal group came into existence sometime around 1996.  Besides Murphy-O’Connor, members included Cardinals da Cruz Policarpo, Martini, Danneels, Silvestrini, Husar, Kasper, and Lehmann. These prelates thought they could have a “significant impact” on future papal elections if each of them used their network of contacts, according to Danneels’ authorized biography co-written by Jürgen Mettepenningen and Karim Schelkens.

The group allegedly lost its impetus in 2006 after failing to have their preferred candidate elected in the 2005 conclave. While the group has been accused of being involved in a plot that led to the resignation of Pope Benedict, these claims have been denied by former bishop of St. Gallen, Ivo Fürer.

But while Bishop Fürer stated that the St. Gallen group did not officially meet after 2006, and therefore could not have been involved in a plot to force Benedict XVI to resign, this does not mean that the group was inactive.

According to Austen Ivereigh, Francis’ biographer and Cardinal Cormac Murphy-O'Connor’s former assistant, days prior to the March 12 conclave in Rome, Murphy-O’Connor was tasked by the St. Gallen “mafia” with informing Bergoglio of a plan to get him elected. Murphy-O’Connor was an old friend of Bergoglio.

As Ivereigh described in his 2014 book on Pope Francis, Murphy-O’Connor was also tasked with lobbying for Bergoglio among his North American counterparts as well as acting as a link for those from Commonwealth countries.

“They first secured Bergoglio’s assent,” wrote Ivereigh. “Asked if he was willing, he said that he believed that at this time of crisis for the Church no cardinal could refuse if asked. Murphy-O’Connor knowingly warned him to 'be careful,’ and that it was his turn now, and was told 'capisco’ – 'I understand.’”

“Then they got to work, touring the cardinals’ dinners to promote their man, arguing that his age – 76 – should no longer be considered an obstacle, given that popes could resign. Having understood from 2005 the dynamics of a conclave, they knew that votes travelled to those who made a strong showing out of the gate,” he wrote.

The English Diocese of Westminster was restored to the Roman Catholic Church in 1850, just over twenty years after the Catholic Emancipation Act. Cardinal Murphy-O’Connor was the tenth post-Reformation Archbishop of Westminster and the first not to die in office. His successor is Vincent Cardinal Nichols.