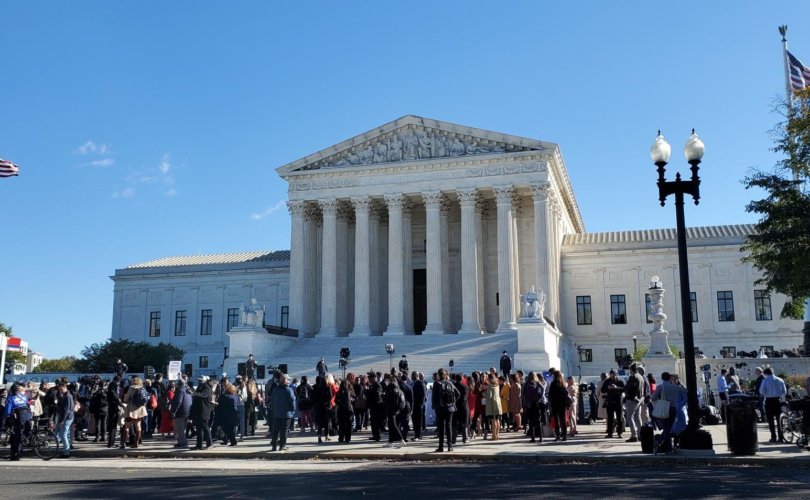 WASHINGTON (LifeSiteNews) – The Supreme Court convened today to hear arguments in multiple cases that could determine the fate of a recent pro-life law enacted in Texas that bans virtually all abortions in the state by six weeks of pregnancy.

The Texas Heartbeat Act, or S.B. 8, prohibits abortion once a baby’s heartbeat becomes detectable, typically by six weeks’ gestation. The legislation relies on a unique enforcement mechanism that empowers citizens, rather than the state, to sue abortionists and anyone else, other than the mother, who facilitates an abortion of a baby with a detectable heartbeat. Violations can result in fines of at least $10,000. The unprecedented pro-life law is currently the strictest in effect in the United States.

The Supreme Court took the cases on an expedited timeframe two weeks ago, after previously allowing S.B. 8 to take effect in a 5-4 vote at the beginning of September.

The justices have said that they will focus their review on the enforcement mechanism of the law and on whether the Justice Department has standing to challenge it.

The Biden administration has made the law’s delegation of enforcement to private citizens the center of its legal challenge, though Texas argues that the provision furthers the state’s interest in defending unborn lives.

“The heartbeat provisions in SB 8 reasonably further Texas’s interest in protecting unborn life, which exists from the outset of pregnancy,” Texas attorney general Ken Paxton said in a brief before the Supreme Court filed this month.

“If it reaches the merits, the Court should overturn [Roe v. Wade] and [Planned Parenthood v. Casey] and hold that SB 8 does not therefore violate the Fourteenth Amendment,” he added.

On December 1, the high court is also scheduled to hear arguments in Dobbs v. Jackson Women’s Health Organization, a case pitting Mississippi officials against an abortion center challenging a 15-week abortion ban enacted by the state in 2018. The case asks the Supreme Court to rule on the constitutionality of abortion restrictions before viability and has the potential to overturn Roe v. Wade.

We stand with AG @KenPaxtonTX and our Texas allies in calling on the Court to make the right decision todayhttps://t.co/pRAvPzSwWG #ModernizeOurLaw

“Texas proves we can love both – protecting unborn children in the law and serving women and families through initiatives like the state’s $100 million per year Alternatives to Abortion program,” she added. “But for two generations, the U.S. Supreme Court has shackled states like Texas to a radical policy of abortion on demand until birth, well past the point when unborn babies can clearly feel pain. The overwhelming majority of Americans agree this is inhumane.”

According to polling last week from the University of Houston and Texas Southern University, 55 percent of Texans support S.B. 8. A Rasmussen poll in September likewise found that more likely voters approved of the law than disapproved of it.

The new heartbeat law has cut Texas’s abortion rate in about half and is estimated to have saved more than 100 babies’ lives each day since coming into effect last month, according to Rebecca Parma, senior legislative associate at Texas Right to Life.

“Thousands of tiny Texans are being spared from the violence of death by abortion because of the way the Texas Heartbeat Act is enforced,” Parma wrote. “No wonder those who promote abortion are so up in arms over its ingenuity.”