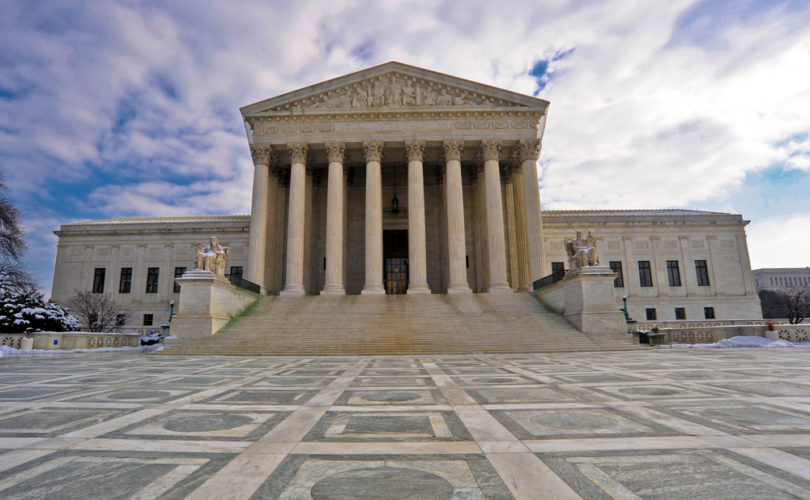 The case was brought by the New York-based Center for Reproductive Rights on behalf of independent abortion facilities in Texas.

The case involves Texas' H.B. 2, a pro-life law that, aside from restricting abortion to the first 20 weeks of pregnancy, required abortionists to have admitting privileges at a hospital within 30 miles of their offices and abortion facilities to meet the same health standards as other ambulatory surgical centers (ASCs).

The decision, written by Justice Stephen Breyer, says that both requirement place a substantial burden on women's right to exercise their reproductive rights, including the right to obtain an abortion. Justice Ruth Bader Ginsburg wrote her own concurring opinion, writing that “complications from an abortion are both rare and rarely dangerous.”

Justice Thomas would have upheld the law in its entirety, writing that the “decision exemplifies the Court’s troubling tendency 'to bend the rules when any effort to limit abortion, or even to speak in opposition to abortion, is at issue.'” Justices Roberts and Alito would have remanded the case to the Fifth Circuit, a common tactic for a Supreme Court that is not working with all nine justices.

The law generated white-hot controversy before it ever passed, as hundreds of activists on both sides of the issue flooded the state Capitol in Austin during the sweltering summer of 2013. At one point, pro-life advocates sang “Amazing Grace” while pro-abortion activists drowned them out by chanting “Hail Satan!”

Wendy Davis waged an 11-hour-long filibuster that temporarily ran out the legislative clock on the original bill. But then-Governor Rick Perry called lawmakers into a special session to pass the act, which he signed into law on July 18, 2013.

500 Texas women a year rushed to hospital from botched abortions

At issue is whether the state's pro-life regulations are intended to preserve women's health and safety, or if they impose obligations that make it impossible for women to have an abortion.

An average of 10 Texas women are taken to the emergency room due to a botched abortion every week, or 500 a year, according to the Texas-based Justice Foundation. More than 200 are hospitalized annually.

The abortion lobby has called these regulations Targeted Regulation of Abortion Providers (TRAP) laws, singling abortionists out unfairly in an effort to put them out of business.

In all, 32 respected medical societies endorsed the admitting privileges statement.

Supporters say the move is a commonsense measure designed to protect women from being abandoned after botched abortions.

Wisconsin's Solicitor General Misha Tseytlin said that state legislators enacted such laws after learning that Dr. Kermit Gosnell's record of serially injuring, and sometimes killing, women. Lawmakers “required that all abortion doctors have admitting privileges at nearby hospitals, in order to ensure that abortion doctors are well qualified and to promote continuity of care,” she said, echoing legal language that admitting privileges are a “core principle for patient safety.”

Abortion advocates took two of the Texas law's provisions to court, for now ignoring the bill's ban on abortions after 20 weeks on the grounds that unborn babies can feel pain by that time. U.S. District Judge Lee Yeakel struck down the bill's admitting privileges in October 2013, saying the requirement had “no rational relationship to improved patient care” and that forcing women to drive 150 miles for abortion constituted an “undue burden” under the 1992 Casey v. Planned Parenthood ruling.

A three-judge panel of the Fifth Circuit Appeals Court overturned his decision in October 2014.

Last June 29, Supreme Court justices vote 5-4 to stop the law from going into effect until they decided whether to hear the case, allowing approximately a dozen abortion facilities that were unable to meet tighter health restrictions to reopen.

The Supreme Court agreed to hear the case last November.

On March 2, for the first time in seven years, justices heard oral arguments on an abortion-related case, with Obama administration Solicitor General Donald Verrilli saying the requirements constituted an unconstitutional burden to a woman's right to choose, and Justice Samuel Alito countering that the mandates “have to do with basic safety.”

Repercussions on the 2016 presidential race

The ruling is sure to impact this year's presidential election. In her speech to Planned Parenthood on Friday, June 10, Hillary Clinton called the case “the biggest challenge to Roe v. Wade in a generation. It's also a reminder of what's at stake in the Supreme Court.” Donald Trump has promised for months to appoint only pro-life Supreme Court justices.

‘Undue burden’? Texas investigation finds it’s easier to get an abortion than a tooth filling

Breaking: Supreme Court to review Texas law that shut down most of state’s abortion facilities