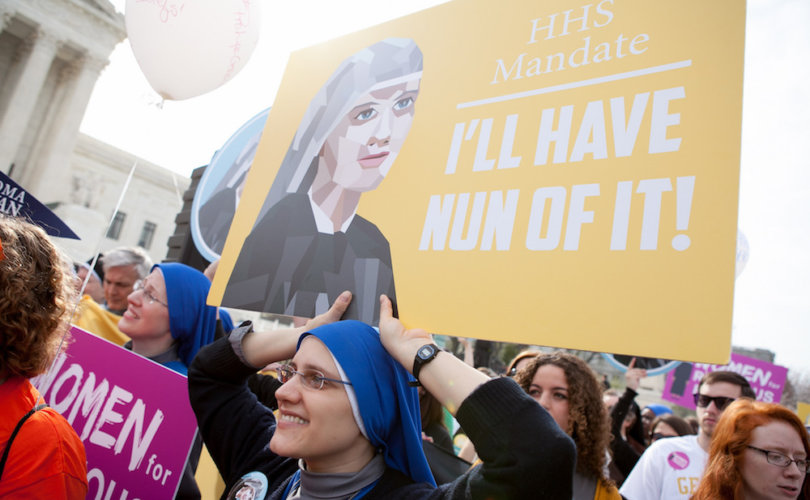 WASHINGTON, D.C., May 16, 2016 (LifeSiteNews) – The U.S. Supreme Court this morning chose not to make a ruling in Zubik v. Burwell about whether the Obama administration's controversial HHS mandate violated federal law.

Instead, the justices remanded the case back to U.S. Appeals Courts, telling the government and the plaintiffs to work together and find a compromise that would allow the government to provide contraceptives, abortifacients, and sterilization to all females without a co-pay while not requiring religious employers to take any active role in the coverage.

The decision vacates the previous, conflicting rulings from the appeals courts and tells the two parties to start anew.

It's a far cry from the ambitious case the court's original nine justices envisioned when they combined seven court cases into one, omnibus case on the HHS mandate. The justices had hoped to rule on whether the controversial regulations implemented by the Obama administration violates the 1993 Religious Freedom Restoration Act (RFRA), especially in the way it may “hijack” the employers' plans to provide coverage that violates their faith.

After the death of Justice Antonin Scalia this year, the argument largely came down to the specific mechanism that religious employers used to opt out of the HHS mandate. Several petitions, particularly the Little Sisters of the Poor, objected to signing a form that signaled their opposition to providing the contraception.

Since insurance companies use that affidavit to provide women contraception, including potentially abortion-inducing “birth control” methods such as the IUD, the nuns argued that signing the paper amounted to their cooperation in sin.

The court, seeming to admit it is hopelessly deadlocked, sought to avoid a 4-4 tie that would leave all the lower courts' orders in place. That would have made the opt-out procedure legal in some places and illegal in others.

Instead, justices asked both sides to submit additional briefs that described how both sides could achieve their mutual goals.

The brief filed by religious petitioners, of both Protestant and Catholic backgrounds, said they were willing to accept the mandate as long as they “need to do nothing more than contract for a plan that does not include coverage for some or all forms of contraception.”

In the government's brief, Solicitor General Donald Verrilli wrote that the present method for religious employers to opt out “could be modified to operate in the manner” that respects conscience concerns, “while still ensuring that the affected women receive contraceptive coverage seamlessly.”

The parties in each of the separate cases will now return to their respective appeals courts to hammer out a new way of offering coverage, while the substance of the HHS mandate goes without judicial review – at least, for now.

“Nothing in this opinion, or in the opinions or orders of the courts below, is to affect the ability of the [g]overnment to ensure that women covered by petitioners’ health plans 'obtain, without cost, the full range of FDA approved contraceptives,'” the justices wrote.