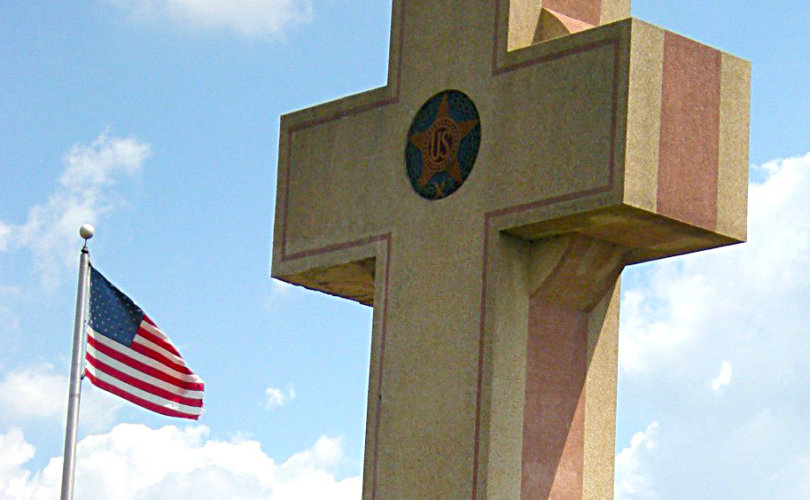 The Bladensburg Veterans Memorial is a memorial in honor of the 49 Bladensburg-area men who gave their lives in World War I.

WASHINGTON, D.C., June 20, 2019 (LifeSiteNews) – The U.S. Supreme Court ruled 7 to 2 this morning in favor of a nearly 100-year-old World War I memorial in Bladensburg, Maryland, known as the “Peace Cross,” allowing it to remain standing.

The case was American Legion v. American Humanist Association. In 2014, an atheist group sued to tear down the cross, arguing having the memorial on public land constituted an endorsement of religion. The same group also sued to tear down a World War II cross monument in Pensacola, Florida, in a case the Court is expected to act on soon.

The Court’s opinion today overturns a ruling by the U.S. Court of Appeals for the Fourth Circuit against the Peace Cross and states that, for many, “destroying or defacing the Cross that has stood undisturbed for nearly a century would not be neutral and would not further the ideals of respect and tolerance embodied in the First Amendment.”

“The message of a monument, symbol, or practice may evolve,” the high court determined. The majority argued in part that the Peace Cross has become more than a religious symbol:

“With sufficient time, religiously expressive monuments, symbols, and practices can become embedded features of a community’s landscape and identity. The community may come to value them without necessarily embracing their religious roots. The recent tragic fire at Notre Dame in Paris provides a striking example. Although the French Republic rigorously enforces a secular public square, the cathedral remains a symbol of national importance to the religious  and nonreligious alike. Notre Dame is fundamentally a place of worship and retains great religious importance, but its meaning has broadened. For many, it is inextricably linked with the very idea of Paris and France. Speaking to the nation shortly after the fire, President Macron said that Notre Dame ‘is our history, our literature, our imagination. The place where  we survived epidemics, wars, liberation. It has been the epicenter of our lives.’”

“The Supreme Court rightly recognized that religious symbols are an important part of our nation’s history and culture,” said Luke Goodrich, vice president and senior counsel at the law firm Becket, formerly the Becket Fund for Religious Liberty. “We look forward to the coming gap in cable-news programming, as atheist organizations that made bank by suing over harmless religious symbols find a new line of work and learn to look the other way.”

“Today, the Supreme Court delivered a much-needed win for the Peace Cross and similar memorials,” said Travis Weber, Vice President for Policy and Director of the Center for Religious Liberty at Family Research Council. “In no way do such memorials violate the Establishment Clause of the First Amendment.”

“However, this decision leaves in place the tangled confusion of past Establishment Clause opinions, which are currently being used to remove religious messages, signs, and symbols from public squares around our country,” continued Weber. “These issues will continue to arise, and we are thankful for those on the bench who point this out. Further, this case reveals the incredible importance of judges and justices on the bench who view the Constitution as originalists.”

The Maryland-National Capital Park and Planning Commission maintains the Bladensburg Cross, which according to Becket was originally built on private land by mothers who lost sons in World War I.

“This is a great victory after we fought tirelessly to keep the Peace Cross standing in recognition of the valor, endurance, courage, and devotion of our World War I veterans,” said Maryland Gov. Larry Hogan (R). “Today’s ruling ensures that this memorial – a dignified tribute to those who came before us and made the ultimate sacrifice – will stand tall and proud for the ages.”

The Bladensburg cross was erected in 1925.

In addition to fighting to remove many memorials from public lands, the American Humanist Association supports the pro-abortion Equal Rights Amendment, environmentalist public policy, and forced vaccinations. It supports “the right of every person to choose death when the dignity, value, and satisfaction of life is impossible despite currently available therapies,” but “decries the death penalty for any crime in any circumstance.”