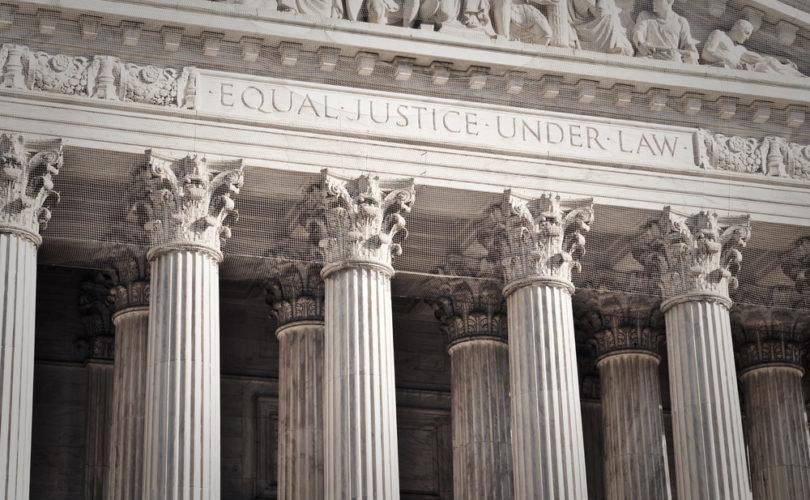 WASHINGTON, D.C., June 26, 2015 (LifeSiteNews) – The Supreme Court has ruled that the U.S. Constitution contains an inalienable right to same-sex “marriage”.

In a 5-4 ruling handed down this morning, the justices ruled that the Fourteenth Amendment requires states to offer marriage licenses to homosexual couples.

The justices also ruled that a state must recognize such a union performed in another state.

The conservatives wrote that the majority opinion imperils religious liberty, twists the Constitution, and disenfranchises the American people.

The case, Obergefell v. Hodges, involved a homosexual couple from Ohio who flew to Maryland to have a seven-minute “marriage” ceremony presided over by one of the partner's aunt on an airport landing strip. Last November, the Sixth Circuit Court of Appeals, based in Ohio, upheld marriage by ruling that the universally recognized right to marry applies only as marriage has historically been understood: the union of one man and one woman.

In overturning that decision, the five liberal justices strongly endorsed the notion that the Constitution is a living document, subject to the views of a rotating cadre of enlightened judges. While the Founding Fathers did not specify a right to same-sex “marriage”, the justices wrote that they possessed “a better informed understanding” of how “to enjoy liberty as we learn its meaning.”

They dismissed millions of citizens who voted for marriage protection amendments in dozens of states as people seeking merely to “lock…out,” “disparage,” “disrespect and subordinate,” and inflict “dignitary wounds” upon homosexuals.

“These apparent assaults on the character of fair-minded people will have an effect, in society and in court,” Justice Roberts wrote in his dissent.

On the other hand, homosexual couples seeking to redefine an institution that has stood for millennia did not “disrespect the idea of marriage” but merely asked “not to be condemned to live in loneliness, excluded from one of civilization’s oldest institutions. They ask for equal dignity in the eyes of the law.”

“The Constitution grants them that right,” they concluded.

All four dissents branded the decision an ill-conceived example of judicial activism that thwarted the democratic process.

The razor-thin margin of the vote heightened its controversy.

“At least two members of the Court’s majority opinion were under a legal duty to recuse and refrain from voting,” wrote the Foundation for Moral Law, a pro-marriage organization, after the ruling.

Without their votes, the decision would have upheld marriage by a 4-3 margin.

The foundation wrote, “Their failure to recuse calls into question the validity of this decision.”

Why the 14th Amendment is no mandate for same-sex ‘marriage’