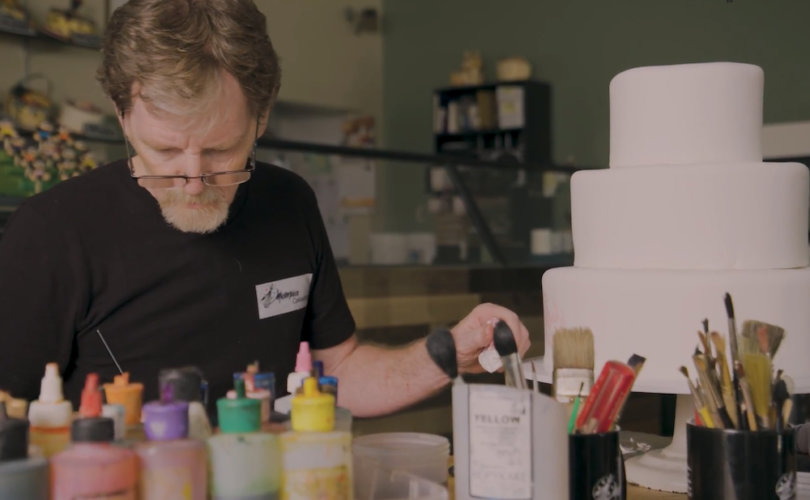 WASHINGTON, D.C., June 4, 2018 (LifeSiteNews) – In a major religious liberty victory, the United States Supreme Court has ruled 7-2 that the government may not force Christian business owners to participate in same-sex “weddings.”

The Court determined the Christian business owner in question, Jack Phillips of Masterpiece Cakeshop, did not get fair hearing with the Colorado Civil Rights Commission after he declined to make a cake for a gay “wedding.”

Pro-family and pro-LGBT advocates were closely watching the case, Masterpiece Cakeshop v. Colorado Civil Rights Commission, as it will have enormous ramifications for the implementation of same-sex “marriage” in the U.S. three years after the Court imposed it on the country.

In a major surprise, Justice Anthony Kennedy, known for his sympathy to the LGBT cause, authored the main opinion, to which Justices Roberts, Breyer, Alito, Kagan, and Gorsuch joined. Justices Kagan and Breyer wrote their own opinions as well. Justices Gorsuch and Alito wrote an opinion together. Justice Thomas, joined by Justice Gorsuch, wrote an opinion of his own.

The only two to dissent were Justices Sotomayor and Ginsburg.

“The free speech aspect of this case is difficult, for few persons who have seen a beautiful wedding cake might have thought of its creation as an exercise of protected speech,” the Court wrote in its majority opinion. “This is an instructive example, however, of the proposition that the application of constitutional freedoms in new contexts can deepen our understanding of their meaning.”

“Whatever the confluence of speech and free exercise principles might be in some cases, the Colorado Civil Rights Commission’s consideration of this case was inconsistent with the State’s obligation of religious neutrality,” the Court continued. “The reason and motive for the baker’s refusal were based on his sincere religious beliefs and convictions… It is proper to hold that whatever the outcome of some future controversy involving facts similar to these, the Commission’s actions here violated the Free Exercise Clause; and its order must be set aside.”

“The Civil Rights Commission’s treatment of [Phillips’] case has some elements of a clear and impermissible hostility toward the sincere religious beliefs that motivated his objection” to baking the cake for the homosexual ceremony, Kennedy’s majority opinion states.

Ginsburg and Sotomayor wrote that they believe “a refusal to sell any wedding cake to a gay couple should occasion affirmance of the Colorado Court of Appeals’ judgment” against Christian bakers.

Justices Thomas argued in his concurring opinion that wedding cakes are expressive and therefore protected speech.

“The Court has said 7-2 that the Constitution requires us all to try and get along,” said Mark Rienzi, president of the pro-religious freedom law firm Becket. “There is room enough in our society for a diversity of viewpoints, and that includes respecting religious beliefs too. The decision is a strong message to governments across the country that they must respect—rather than punish—religious diversity on important issues.”

Battle over forced baking of gay cakes began in 2012

Masterpiece Cakeshop v. Colorado Civil Rights Commission stemmed from a 2012 incident in which a homosexual couple sought a wedding cake from Phillips’ Masterpiece Cakeshop in Lakewood, Colorado. Phillips declined, citing his religious convictions, and referred the couple to another area baker willing to bake their cake.

But instead of taking Phillips’ accomodation and moving on, Charlie Craig and David Mullins filed a discrimination complaint with the Colorado Civil Rights Division, which deemed him guilty of violating state anti-discrimination laws and ordered “re-education” for Phillips and his employees.

Phillips appealed the decision, lost before the Colorado Court of Appeals, and eventually convinced the nation’s highest court to hear the case. The pro-homosexual Human Rights Campaign marshalled numerous corporations and food-industry personalities to weigh in against him.

“I’m happy to sell a cake to anyone, whatever his or her sexual identity,” Phillips explained in a USA Today op-ed last December. However, cake design is inherently expressive, “a message telling all who see it that this event is a wedding and that it is an occasion for celebration.”

“What a cake celebrating this event would communicate was a message that contradicts my deepest religious convictions, and as an artist, that’s just not something I’m able to do, so I politely declined,” he declared. “But this wasn’t just a business decision. More than anything else, it was a reflection of my commitment to my faith.”

The Trump administration also intervened in the case, filing an amicus brief urging the court to side with Phillips.

“In the view of the United States, a […] First Amendment intrusion occurs where a public accommodations law compels someone to create expression for a particular person or entity and to participate, literally or figuratively, in a ceremony or other expressive event,” the brief argued.

Alliance Defending Freedom attorney Kristen Waggoner represented Phillips in oral arguments, noting that the court “has never compelled artistic expression, and doing so here would lead to less civility, diversity, and freedom for everyone, no matter their views on marriage.”

Justices Kagan and Breyer wrote in their concurring opinion: “Colorado can treat a baker who discriminates based on sexual orientation differently from a baker who does not discriminate on that or any other prohibited ground. But only, as the Court rightly says, if the State’s decisions are not infected by religious hostility or bias.”

For months, rumors have persisted that Anthony Kennedy intends to retire before the end of the year. This would give the president an opportunity to appoint another Supreme Court Justice, theoretically establishing a clear conservative majority on the court.

The ruling will have a profound impact on religious liberty across the United States. Phillips is just one of many Christian small business owners, from bakers and florists to photographers and venue providers, whom LGBT activists have attempted to force to provide services for same-sex “weddings,” with varying degrees of success.

The tactic is part of LGBT activists’ broader strategy of pressuring dissenters into compliance rather than persuading them via arguments. But while the LGBT lobby has had great success in recent years enacting pro-homosexual laws and blocking religious liberty protections, there is some evidence that their cultural offensive is having an unintended drawback. In March, GLAAD found that America’s LGBT acceptance has actually begun to decrease, despite public support for same-sex “marriage” previously reaching historic heights.