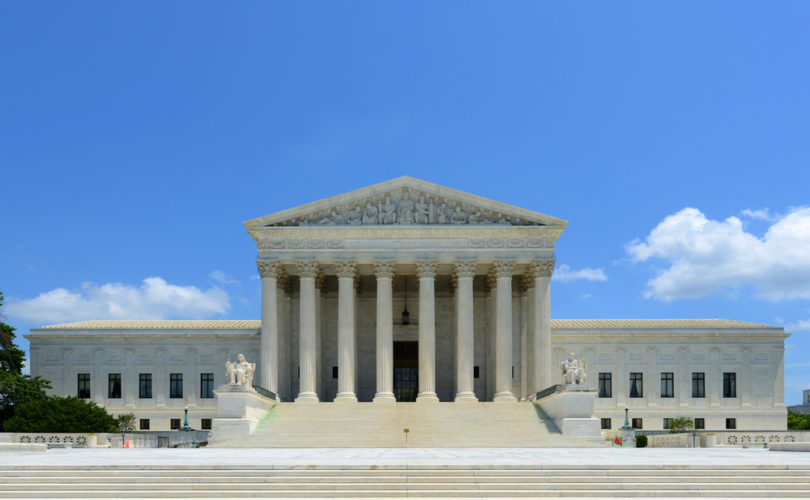 UPDATE January 10, 2022 at 1:32 p.m.: The Supreme Court has yet to issue any injunctions on the OSHA mandate. However, the vaccine part of the mandate will now only begin to take effect February 9, 2022, with the masking requirement beginning today.

WASHINGTON, D.C. (LifeSiteNews) – The U.S. Supreme Court will hear arguments on January 7, 2022 for two vaccine mandate cases: whether the Biden administration can force large employers to mandate their employees receive COVID shots or weekly tests, and whether the government can force healthcare workers at facilities that receive Medicare or Medicaid funding to be jabbed.

#SCOTUS will also hear argument on the same day on the Biden administration’s request to enforce a vaccine mandate for healthcare workers at facilities that receive Medicare/Medicaid funding. https://t.co/xmuTGuAcuz

Yesterday, Supreme Court Justice Brett Kavanaugh asked the Biden administration to respond to appeals asking the Court to block enforcement of the  Occupational Safety and Health Administration (OSHA) rule about large businesses, which was given the go-ahead by the U.S. Court of Appeals for the Sixth Circuit on Friday, by 4 p.m. December 30.

Phil Kerpen, president of the conservative group American Commitment, tweeted that it appears attorney Steve Lehotsky will argue against the OSHA mandate, calling him an “absolute debate legend.”

Looks like Steve Lehotsky will argue against the OSHA mandate. An absolute debate legend.

This week, Washington, D.C., Chicago, and Boston announced they will join New York City, Los Angeles, and San Francisco in mandating patrons of restaurants, gyms, and other indoor venues show their medical papers in order to be allowed entry and service, as blue portions of the country panic and lock down over the omicron variant of the coronavirus. The U.S. Centers for Disease Control (CDC) has said the majority of omicron cases in the U.S. have been in “fully vaccinated” individuals. The variant appears to be even milder than previous variants of the virus, which originated in Wuhan, China and has wreaked havoc on the world for nearly two years, with government responses to it causing unprecedented attacks on the freedoms of association and assembly. In many parts of the world, these government responses have forced people to be injected with a novel medical product against their will in order to be able to provide for themselves and their families.

Earlier this month, the Supreme Court rejected an appeal to block New York’s COVID-19 vaccine mandate for healthcare workers without religious exemption, with Justices Amy Coney Barrett and Kavanaugh, both appointed by Donald Trump, providing the deciding votes by joining the Court’s liberals.