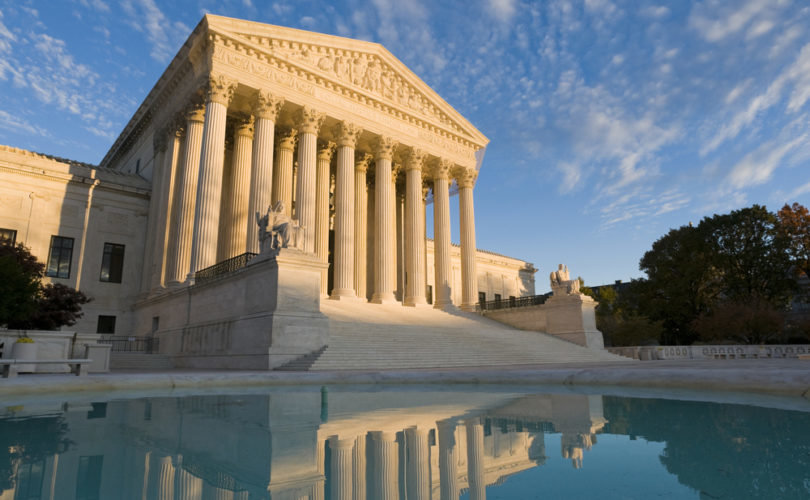 WASHINGTON, D.C. – The Supreme Court has unanimously struck down a Massachusetts law establishing a buffer zone around abortion facilities.

The 34-page ruling, written by Chief Justice John Roberts, said the statute went too far by forbidding pro-life advocates from engaging in free speech on “a public way or sidewalk adjacent to a reproductive health care facility.”

The buffer zone law represents an “extreme step of closing a substantial portion of a traditional public forum to all speakers,” the justices ruled. “The Commonwealth may not do that consistent with the First Amendment.”

“While we wish the decision had recognized the content-restrictions inherent in this type of law, this decision is truly a victory for courageous, compassionate sidewalk counselors in Massachusetts who have saved hundreds of lives through their quiet outreach offering help and alternatives to women,” Dana Cody, president and executive director of Life Legal Defense Foundation, told LifeSiteNews.com.

“In a brazen affront to the First Amendment, Massachusetts government officials had sought to use the threat of arrest and criminal conviction to silence those offering women life-affirming alternatives to abortion,” said Dr. Charmaine Yoest, president and CEO of Americans United for Life. “The Supreme Court rightly rejected this unlawful attempt to deny pro-life Americans their First Amendment rights.”

However in a flashpoint with three conservative justices, a majority of the justices endorsed the right of states to create buffer zones around abortion facilities as long as they are more narrowly tailored, especially if the state establishes a legal history of intimidation.

“The act is neither content nor viewpoint based and therefore need not be analyzed under strict scrutiny,” they ruled, provoking a stern response from Justices Scalia, Kennedy, and Thomas.

Pro-life forces had said the law censored their speech by allowing abortion escorts to speak freely to women but silencing anyone who would try to tell the woman of abortion's potential harms.

“The government cannot reserve its public sidewalks for Planned Parenthood, as if their message is the only one women should be allowed to hear,” said Mark Rienzi, the sidewalk counselors' attorney. “Today’s decision confirms that the First Amendment is for everyone, and that the government cannot silence peaceful speakers. That result is good news for Eleanor McCullen, and it is great news for the women she helps.”

Justice Roberts rejected the notion that buffer zone laws target only one side of the argument, saying they “burden substantially more speech than necessary to achieve the Commonwealth’s asserted interests” in protecting women seeking an abortion from allegedly aggressive pro-life protesters.

The bill was introduced in 2007 by Massachusetts House of Representatives. Member Martha “Marty” Walz, who is now the president of the Planned Parenthood League of Massachusetts. She claimed in a USA Today op-ed that the law is necessary to protect abortion workers from “violent, extremist anti-abortion protesters led by Operation Rescue.”

Eleanor McCullen – a 77-year-old grandmother who says she has spent more than $50,000 of her own funds trying to reach young women and protect unborn children – filed suit in January 2008 against state Attorney General Martha Coakley, who is currently running for governor of Massachusetts as a Democrat.

Obama administration Deputy Solicitor General Ian H. Gershengorn argued on behalf of the U.S. government in support of the restrictive law. But oral arguments showed every justice, including Elena Kagan, expressing skepticism about the breadth of the Massachusetts ordinance.

Justice Kennedy asked at one point, “Do you want me to write an opinion and say there’s no free speech right to quietly converse on an issue of public importance?”

“I'm thankful for the Supreme Court doing the right thing, recognizing freedom of speech and freedom of dissent,” Russell D. Moore, president of the Ethics and Religious Liberty Commission of the Southern Baptist Convention, said today. “Those of us who are pro-life have constitutional guarantees embedded in the First Amendment, along with everyone else. This was a good decision, and I am cheered that it was a unanimous decision.”