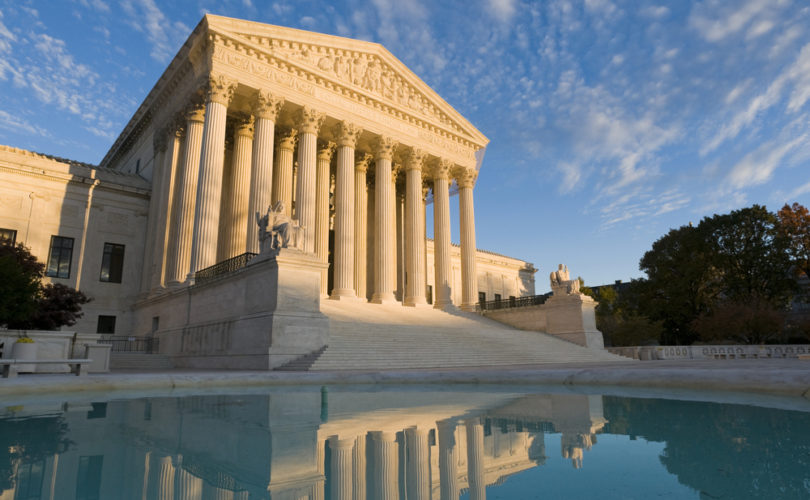 WASHINGTON, D.C., June 25, 2015 (LifeSiteNews) – The Supreme Court has upheld the Obama administration's controversial implementation of the Affordable Care Act in a 6-3 decision this morning.

Americans are required to purchase an insurance program that follows federal guidelines, including no co-pay coverage of contraception, sterilization, and abortion-inducing drugs. In some cases, this includes a $1 abortion surcharge.

The federal government offers individuals a federal subsidy to underwrite part of the cost of the premiums, which have increased as the law's provisions take effect.

However, according to the wording of the law, the federal government can only provide subsidies to individuals who live in states where their local health care exchange was “established by the state.”

At issue is the fact that the Obama administration has provided millions of dollars of subsidies to individuals who live in the 34 states that have not set up a state exchange, something petitioners said violated the law's wording and intent.

The architect of the law, Jonathan Gruber, once explained, “If you’re a state and you don’t set up an exchange, that means your citizens don’t get their tax credits.” The Obama administration hoped federal funds would be an incentive for Republican governors to participate in the implementation of his signature legislation.

In the nearly three dozen states that chose not to create a state exchange, the federal government established and ran the process – but it gave tax credits to people who lived in those states, anyway.

The 6-3 ruling in King v. Burwell allows the administration to continue providing the subsidies despite the wording of the law.

The ruling, written by Chief Justice John Roberts, admits that its conclusions contradict “the most natural reading” of the law. But it is necessary to preserve the subsidies, even if the law is written poorly, “to avoid the type of calamitous result that Congress plainly meant to avoid.”

“Congress passed the Affordable Care Act to improve health insurance markets, not to destroy them,” Roberts wrote on behalf of the Court's liberal bloc, as well as swing justice Anthony Kennedy.

Justice Antonin Scalia wrote a scathing dissent, joined by Clarence Thomas and Samuel Alito, saying the ACA should be called “SCOTUSCare,” since the Supreme Court has written two dubious decisions to uphold its legality.

Legal scholars and commentators agreed the decision lacked legal standing, allowed the continued funding of abortion and abortifacients, and undermined the concept of the rule of law that has undergirded Western civilization since the Magna Carta.

“We are deeply disappointed with today’s Supreme Court decision because it hurts Americans like us in two ways,” The four plaintiffs in the case – David King, Brenda Levy, Rose Luck, and Douglas Hurst – responded in a joint statement. “First, it threatens something that our democracy is based on–the rule of law. And second, it allows the IRS to keep offering nationwide subsidies even though the law that Congress passed says otherwise.”

Both pro-life advocates and abortion industry representatives agreed before the case was decided that it would greatly impact abortion funding.

“Whether or not an insurance Exchange is established by the federal or state government, it receives taxpayer dollars, which should not be used to pay for abortions and life-ending drugs and devices,” said AUL Action President and CEO Dr. Charmaine Yoest. “AUL Action calls on the U.S. Senate to address this problem by moving immediately to pass the No Taxpayer Funding for Abortion Act, S. 582, which would apply and make permanent the life-affirming principles of the Hyde Amendment to the Affordable Care Act.”

National Right to Life agreed that, at a minimum, Congress must act to protect taxpayers from underwriting abortion, something even President Obama claimed was never his intention.

“Federal taxpayer subsidies are helping pay for over 1,000 health plans that cover abortion on demand, and today's Supreme Court decision underscores that only Congress can put a stop to that,” said Carol Tobias, president of National Right to Life. “This decision again demonstrates the need for enactment of the No Taxpayer Funding for Abortion Act, which would permanently prevent taxpayer subsidies for abortion-covering health plans, both in Obamacare and in other federal health benefits programs.”

Penny Nance, the CEO and President of Concerned Women for America Legislative Action Committee, called on the Republican-controlled Congress to “repeal this intrusive and burdensome law” and ensure that American taxpayers “are not forced to subsidize abortions.”

“Americans should not be forced to pay for other people's abortions,” said Tony Perkins, president of the Family Research Council. “Since the Court continues to ignore the plain meaning of the law, Congress must step in and act to fix this monstrosity.”