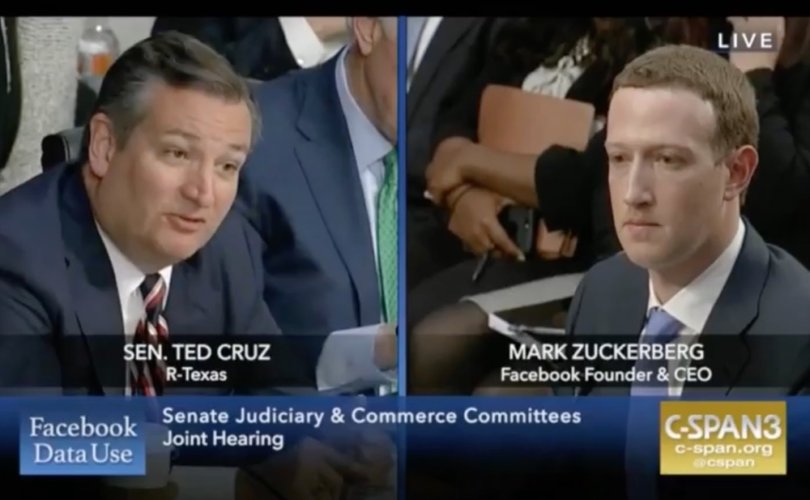 Cruz began by asking whether Facebook considers itself a neutral forum, to which Zuckerberg said Facebook views itself as “a platform for all ideas.” Cruz followed up by noting that online services are not held liable for their content so long as they are a “neutral public forum.”

He then asked again whether Facebook considers itself a neutral public forum, or if it engages in political speech.

Zuckerberg answered that Facebook’s “goal” was “certainly not to engage in political speech.” Pressing further, Cruz told him that “a great many Americans” were “deeply concerned” that Facebook was engaged in a “pervasive pattern of bias and political censorship.”

He cited several examples of Facebook suppressing conservative views from its trending news stories, such as stories on the Conservative Political Action Conference, the Lois Lerner IRS scandal, and others. He also highlighted Facebook shutting down a Chick-Fil-A Appreciation Day page, blocking more than two dozen Catholic pages, and classifying conservative video bloggers Diamond and Silk as “unsafe for the community.”

“To a great many Americans, that appears to be a pervasive pattern of political bias. Do you agree with that assessment?”

Zuckerberg answered by calling that a “fair” concern given that Facebook’s headquarters was located in the “extremely left-leaning” Silicon Valley, but he claimed that he actively tries to “root out” any instances of bias in Facebook’s work.

Cruz asked if he was aware of any instances of Facebook removing pages or advertisements associated with Planned Parenthood, MoveOn.org, or any Democratic political candidates. Zuckerberg said he was not. He also denied knowing the political affiliations of Facebook employees involved in reviewing content, or hiring or firing anyone on the basis of their politics.

Cruz specifically asked him about the case of Palmer Lucky, the creator of the virtual reality device Oculus Rift who left Facebook after his support for a pro-Donald Trump group became public. Zuckerberg refused to comment on specifics, but denied that Lucky’s firing had anything to do with his political views.

The senator next cited Zuckerberg’s previous testimony that Facebook had an active interest in fostering “positive” connections between users, then asked whether that responsibility extended to connections “that those 15,000 to 20,000 people deem unacceptable or deplorable.”

Zuckerberg answered that there were some issues, such as “foreign interference in our elections, terrorism, self-harm,” that clearly warranted removal, but maintained that Facebook was “generally proud” of its record on that score.

“I’m very committed to making sure that Facebook is a platform for all ideas,” he insisted. “That’s a very important founding principle of what we do.”

The primary focus of today’s testimony has been Facebook’s use of personal data collected from its users. Last week the company admitted that it improperly shared information on up to 87 million users with the data firm Cambridge Analytica. The week before, a Cambridge whistleblower testified before the British House of Commons that Facebook had the ability to listen to users through smartphones in which their app is installed.

Censorship of and bias against conservative views has been a concern, as well. Analysis has found that political blogs have seen significant traffic declines in recent months while mainstream media outlets such as CNN and the New York Times have seen increased activity. In recent months, LifeSiteNews has covered several instances of Facebook censoring advertising of pro-life content.