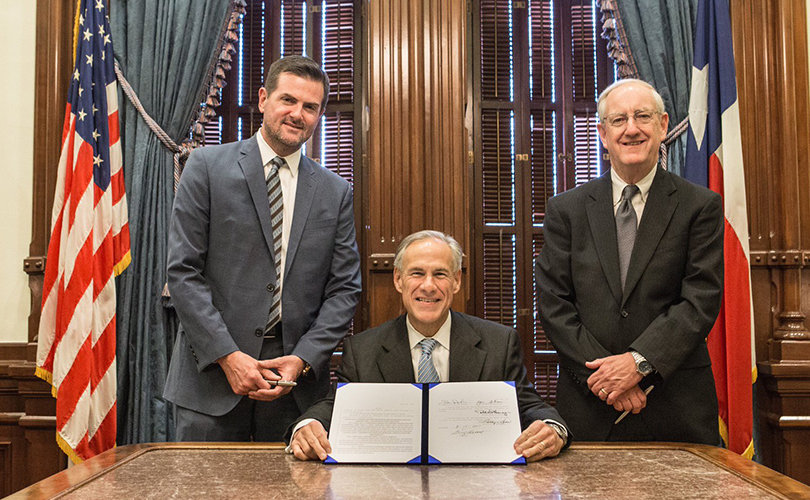 Texas Gov. Greg Abbott (center) signed a bill today that prevents taxpayers from having to pay for abortions through their insurance plans.

The new law will keep Texans from having to pay for elective abortions through their insurance plans.

“As a firm believer in Texas values I am proud to sign legislation that ensures no Texan is ever required to pay for a procedure that ends the life of an unborn child,” Gov. Abbott said. “This bill prohibits insurance providers from forcing Texas policy holders to subsidize elective abortions. I am grateful to the Texas legislature for getting this bill to my desk, and working to protect innocent life this special session.”

New law signed to ensure no Texan is required to pay for a procedure that ends the life of an unborn child. https://t.co/LYfE9jFm1o pic.twitter.com/bYTWunoglO

HB-214, which the House passed last week and the Senate approved Sunday, applies to “elective” abortions and specifically includes an exemption for cases of medical emergency to save the mother’s life.

“What we’re saying here is: If you want to buy this coverage, you can buy it,” Republican Rep. John Smithee said during the House debate. “This isn’t about who can get an abortion. It is about who is forced to pay for an abortion.”

“Texas must take steps to prohibit taxpayer and premium dollars from subsidizing abortions that are not medically necessary,” Republican Sen. Brandon Creighton said.

Gov. Abbott called a special legislative session to focus on the bill, along with another bill to require doctors and health clinics to report abortion complications to the state in greater detail. That second bill passed both state chambers on Friday.

“Just because abortion is legal does not mean that people who have significant moral concerns with the taking of innocent life — as they believe abortion does —- need to pay for it through their health insurance, said Abby Johnson, a former Planned Parenthood director in Texas who now runs And Then There Were None.  “Abortion advocates automatically go to the far reaches of hysteria and assume the worst with this kind of legislation: that women won't be able to get abortions when they want them.  Women have access to abortion but those of us who believe it is the intentional ending of a human life shouldn't have to pay for it.”

Testifying for the bill before the Texas Senate committee, state Right to Life director Elizabeth Graham reasoned that abortion is not healthcare.

The greatest controversy over the bill centered on exemptions for fetal handicaps and for rape. Democrats unsuccessfully tried to insert the additional exemptions.

Democratic Sen. Sylvia Garcia fought for exemptions by charging that the bill amounts to nothing but “rape insurance.” “No woman plans … to be raped,” she argued. Her exemptions were defeated on a party line 20-10 vote.

New York’s Center for Reproductive Rights (CRR) reached across the nation to criticize the bill. CRR president Nancy Northup complained that abortion in cases of fetal handicap is cost prohibitive for most poor women.

The American College of Obstetricians and Gynecologists also came out against the bill, claiming that abortion is “essential” healthcare.

The Guttmacher Institute’s Elizabeth Nash said the bill was unnecessary because “most women pay out of pocket already.”

Many previous pro-life laws in Texas were overruled by the U.S. Supreme Court in 2016 as having the effect of limiting abortion “access.”

Only 10 states have laws keeping taxpayers out of the abortion insurance business.  Idaho, Kansas, Kentucky, Michigan, Missouri, Nebraska, North Dakota, and Oklahoma restrict tax funds from paying for abortion insurance in all cases except a mother’s life. Indiana and Utah have similar laws but include rape and incest exemptions. All allow any individual to purchase abortion insurance separately.

A physician who does no wrong to the patient or baby and delivers life that ultimately is disabled is not responsible for compensating the family for the cost of rearing the child,” he explained on his website.