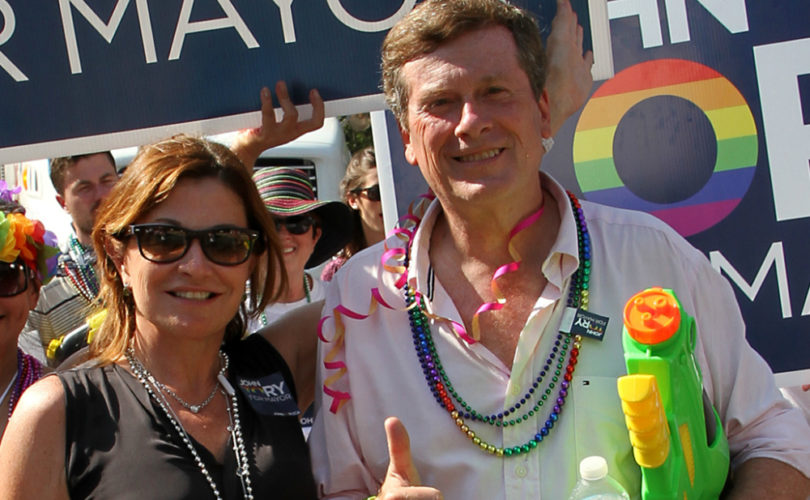 John Tory attends Toronto's WorldPride parade in 2014 while he was campaigning for mayor.

Sign the petition demanding that the City of Toronto reverse its decision to ban Voices of the Nations here.

TORONTO, November 25, 2015 (LifeSiteNews) — After tens of thousands of people signed petitions and hundreds joined a rally on Saturday, Toronto Mayor John Tory has come to the defence of a Christian concert banned from a city square because it was singing about Jesus. The mayor said the decision by management of Yonge-Dundas Square was comparable to banning a Christmas concert.

“I respectfully disagree with [the] decision,” Tory told a questioner at a town hall event on Rogers TV Tuesday night, according to Sun Media. “There is a city policy that says you're not supposed to make people feel uncomfortable by having a kind of what I'll call a 'hard sell' on religion or any other kind of matter in public squares and I understand that.”

“I hope that those people will reconsider and perhaps just say, 'Look, we're counting on you to act responsibly,'” Tory said. “I hope they get their permit and I hope that people understand this is no different than a Christmas carol service.”

The Christian group Voices of the Nations has organized the concert in the square every summer since 2006, however the Yonge-Dundas Square Board of Management denied their application for a 2016 permit last month.

On October 22, Natalie Belman, the square’s manager of events, told them they had violated the City’s policy against “proselytizing” by singing the name of Jesus. “If you’re praising Jesus, ‘praise the Lord,’ and ‘there’s no God like Jehovah,’ that type of thing, that’s proselytizing,” she told the group in a recording of a phone conversation obtained by LifeSiteNews.

Voices of the Nations obtained the legal services of the Justice Centre for Constitutional Freedoms, which has filed an appeal, to be considered December 10. The organization has threatened to launch a lawsuit if necessary, and says they are willing to take it to the Supreme Court if it comes to it.

Story: City of Toronto agrees to hear appeal from group banned from city square for singing about Jesus

On November 9 they delivered two petitions to Mayor Tory’s office totalling over 40,000 signatures – one of 30,000 names collected by LifeSiteNews and another of over 10,000 by TheRebel.media.

A rally on behalf of Christian freedoms on Saturday drew a crowd estimated at over 600 people.

Tory, who took office on December 1, 2014, and was opposed during the election by life and family leaders, would not say whether he will step in on Voices of the Nations behalf, saying he is “still learning” what role he can play as mayor in such decisions. But he added, “I'm quite happy if it is proper for me to call, to call and say this is my view. I don't think these people pose any threat, I really don't.”

“We would never think of not allowing people to have a Christmas carol service in Yonge-Dundas Square. And when people are getting up and singing the chorus to O come let us adore him, O Come All Ye Faithful, O come let us adore him – the words were like that, praise the Lord and whatever. And I say, 'Well, so fine then are we going to ban Christmas carol services too?'”

“I think this is a bit of how the world has gone a bit overboard on some of these things,” he added.