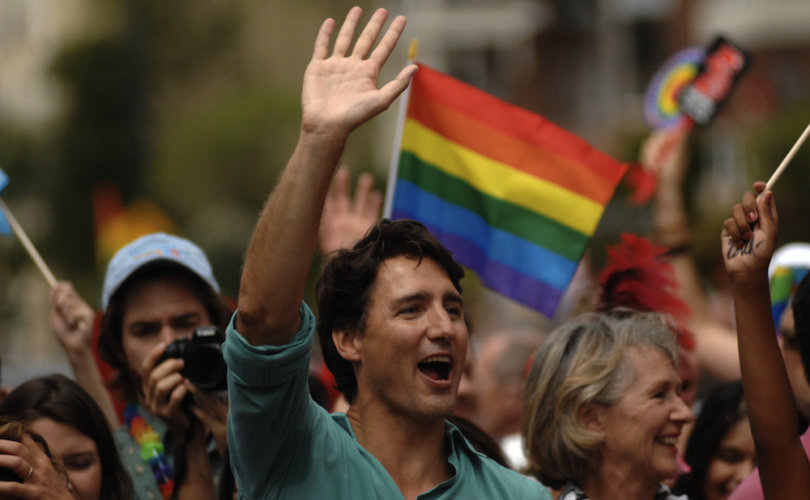 OTTAWA, March 9, 2020 (LifeSiteNews) — The Trudeau Liberals introduced a bill Monday that will make it a crime not only to give minor Canadians help to overcome same-sex attraction or gender confusion but to “remove a minor from Canada” to seek such help.

“A competent adult could conceivably defend the right in court to receive this activity,” Lametti told reporters. The bill as written provides a “strong balance between progressive policies and constitutional [rights].”

If Bill C-8 is passed, “Canada’s law will be the most progressive and comprehensive in the world,” he declared.

It adds: “For greater certainty, this definition does not include a practice, treatment or service that relates (a) to a person’s gender transition; or(b)to a person’s exploration of their identity or to its development.”

Those convicted of causing a child to undergo “conversion therapy”, either in or outside Canada, or forcing an adult to do so, face a maximum of five years in prison.

Those convicted of advertising or profiting from “conversion therapy” face a maximum of two years in jail.

Minister of Diversity, Inclusion and Youth Bardish Chagger was also at the conference, as well as alleged “survivors” of “conversion therapy,” which Lametti described as a “discredited practice” and “not based in science.”

When a reporter questioned Lametti about Charter rights to freedom of expression and religion, the justice minister said the Liberals were concerned about the “devastating effects” of “conversion therapy.”

But pro-family advocates who have been lobbying against a similar bill in the Senate, S-202, are denouncing the bill as a totalitarian law that will prevent Canadian youth from getting therapy they want and need.

“Any kind of clinical therapy or spiritual counseling to help a person overcome their gender identity confusion and to accept their bodily reality, including the pastoral support … will be defined as ‘conversion therapy,’ and thus, become illegal,” says Jack Fonseca, director of political operations of Campaign Life Coalition, Canada’s national pro-life, pro-family political lobbying group.

However, the difficulty with opposing a ban on so-called “conversion therapy” is that Canadians have been misled by the mainstream media and the LGBTQ lobby to such a degree that they have no idea what the term means, Fonseca told LifeSiteNews in an earlier interview.

“At this very moment, dishonest media outlets and even more dishonest LGBT activists are running around the country, lying and claiming that gays and lesbians are being electroshocked, and forcibly confined, and tortured by churches and psychotherapists who practice ‘conversion’ therapy,” he said.

“And this is a lie,” Fonseca said. “We’re talking about loving, standard talk therapy. There’s nothing forcible about it; people are going there voluntarily.”

Dr. Ann Gillies, Ontario psychotherapist and author of the 2017 book Closing the Floodgates, an analysis of propaganda promoting the sexual revolution, echoed this when warning against similar legislation, Senate Bill S-202.

“The ultimate goal is to silence the Christian church in Canada. It is to silence us from talking. It’s totally totalitarian,” said Gillies, a retired expert in counseling survivors of complex trauma, at Campaign Life event last month.

She pointed out that Dr. Kristopher Wells, Canada Research Chair for the Public Understanding of Sexual and Gender Minority Youth at MacEwan University in Edmonton, Alberta, is “the driving force” behind these bills.

Wells is an LGBTQ activist “who has, among other things, shared a cartoon comparing Christians to Nazis, posted sexually explicit content on social media, and relentlessly promoted curriculum and materials that promote a wide range of sexual acts and experimentation for minors,” noted Jonathan Van Maren in an earlier column warning about the Liberals’ intentions.

Wells has “a strict agenda to go after the churches,” Gillies said.