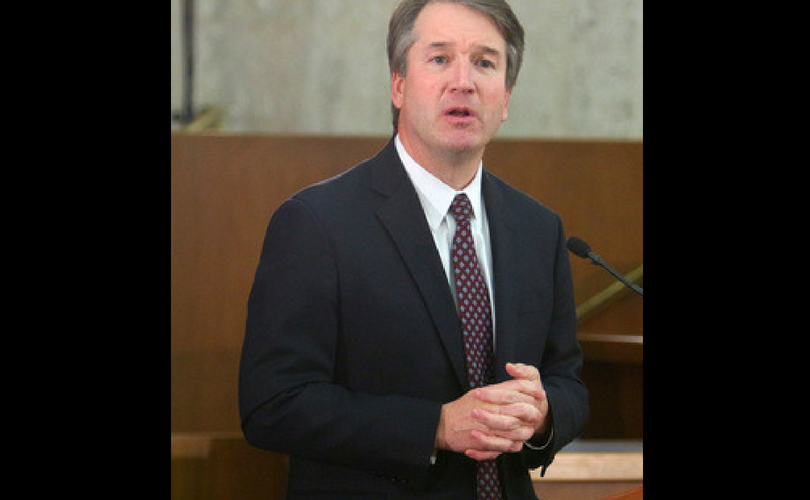 Trump praised Kavanaugh's committment to “equal justice under the law” and called him a “brilliant jurist with a clear and effective writing style.” He is “universally regarded as…one of the finest legal minds of our time.”

“Justice Kennedy devoted his career to protecting liberty,” Kavanaugh said. In his speech he also mentioned “equality for all Americans.”

Trump noted that nominating a Supreme Court justice is “one of the most profound responsibilities of the president of the United States.”

Trump thanked Kennedy for “a lifetime of distinguished service.” He also paid tribute to “the late, great Justice Antonin Scalia” and his successor, Neil Gorsuch, who he said is a “faithful servant of our Constitution.”

Scalia's wife Maureen was at the White House tonight, and Trump mentioned her.

“In keeping with president Reagan's legacy, I do not ask about a nominee's personal opinions,” said Trump. Rather, he wanted to know “whether they can set aside [their] views to do what the law and Constitution require.”

“I believe that an independent judiciary is the crown jewel of our constitutional republic,” Kavanaugh said. He promised to “keep an open mind in every case.”

In addition to speaking about his family, Kavanaugh mentioned he attended a Jesuit high school. The judge said there are many things members of his church don't agree on, but they are all committed to serving others. He did not specify what those topics are.

“We encourage Brett Kavanaugh to uphold the Constitution and support the most basic human right – the right to life – for all people,” said Lila Rose, Founder and President of Live Action. “While the Supreme Court will hear many cases, we look forward to the day when our nation’s highest court acknowledges the great injustice of abortion and finally upholds the right to life for all humans, born and unborn. We hope that with Brett Kavanaugh, the court ensures that our very first right, the right to life, will be protected by our laws rather than trampled by them. The right to life is the foundation for all other human rights – without it, no other rights can be enjoyed.”

“Our laws must reflect reality: Science has proven that a human being – with her own complete and unique set of DNA – is formed at the moment of fertilization,” continued Rose. “Human rights are grounded in being human — not in a person’s age, level of development, or location.”

Kavanaugh has the enthusiastic support of many conservative legal commentators and a reputation for rooting his decisions in the plain text and original understanding of the Constitution. However, some pro-lifers remain wary.

As a D.C. Court of Appeals judge, Kavanaugh sided with Priests for Life when it fought the Obama administration over being forced to fund its employees' contraception.

However, he also suggested the government has a “compelling interest in facilitating access to contraception for the employees of…religious organizations” who do not want to be involved in assisting with contraception.

“Unlike other dissenters, who maintained that there is no compelling government interest in facilitating access to contraception, Kavanaugh would have ruled that a compelling interest does exist, but the government can achieve it in other ways,” Edith Roberts at SCOTUS blog explained.

(The case was eventually settled and the Trump administration has been dismantling and ending the anti-conscience rules imposed by the Obama administration.)

Ed Wheelan of the Ethics and Public Policy Center and Kelly Shackleford of First Liberty Institute maintain that Kavanaugh has a strong record on religious liberty.

Kavanaugh “volunteered his time almost 20 years ago to work on a religious liberty case at the [U.S.] Supreme Court with me and Jay Sekulow,” according to Shackleford. “He has been committed to the Constitution and religious liberty for a long time.”

As Vox reported, Kavanaugh “represented Cuban child Elian Gonzalez pro bono during the conservative battle to keep him from returning to Cuba.”

Roberts called Kavanaugh’s position in Garza v. Hargan, about whether illegal immigrant minors have the right to a government-facilitated abortion on U.S. soil, “conservative” but noted he “did not go as far as one of his colleagues.”

In Garza v. Hargan, a pregnant undocumented teen in immigration custody wanted to obtain an abortion, but was prevented by her government custodians from doing so. Kavanaugh wrote a panel decision vacating a district-court order that required the government to allow the teen to leave the detention facility to obtain the abortion; the panel imposed an additional waiting period to give the government time to obtain a sponsor. The en banc court reversed. Kavanaugh dissented, arguing that the en banc ruling was “ultimately based on a constitutional principle as novel as it is wrong: a new right for unlawful immigrant minors in U.S. Government detention to obtain immediate abortion on demand.” In a separate dissent, Judge Karen LeCraft Henderson maintained that as a noncitizen, the teen had no due-process right to the abortion. Kavanaugh, in contrast, noted that the government had conceded the teen’s right to an abortion. He went on to assert that delaying the procedure while the government sought a sponsor was permissible under the Supreme Court’s precedent because it did not impose an undue burden on that right. At the government’s request, the Supreme Court vacated the D.C. Circuit’s decision this month in a per curiam decision in Azar v. Garza, ruling that the case became moot through no fault of the government’s when the teen obtained the abortion.

Senate Majority Leader Mitch McConnell has said the Senate will vote on his confirmation this fall.

Kavanaugh faces an uncertain path to confirmation. With Sen. John McCain indefinitely absent from the Senate for cancer treatment, Republicans have a razor-thin majority of 50 to 49. Pro-abortion GOP Sens. Susan Collins and Lisa Murkowski have signaled that they would oppose any nominee hostile to Roe v. Wade, and Democrat activists and left-wing media voices have begun a campaign to pressure them to do so.

The two voted for all of Trump’s judicial nominees so far, including now-Justice Neil Gorsuch. Gorsuch did not have an anti-Roe paper trail and spoke favorably of respecting precedent.

Under the Senate’s current makeup, Vice President Mike Pence could still break the tie with just one GOP defection, but two would be enough to torpedo the nomination. However, if both Collins and Murkowski defect, some Republicans believe they could win over Democrat Sens. Joe Manchin, Joe Donnelly, or Heidi Heitkamp to compensate. All three supported Gorsuch, and all three face re-election in Republican states this fall.

Trump invited those three senators to join him as he announced the nominee, but they declined. Just after 6:05 p.m. EST, Fox News reported that Trump had also invited Sen. Doug Jones, D-AL, and Sen. Dianne Feinstein, D-CA.

Senate Minority Leader Chuck Schumer, D-NY, began leading Senate Democrats in opposition to potential appointees before the nomination, fretting the new justice could be the deciding vote to end or restrict abortion on demand in the U.S.