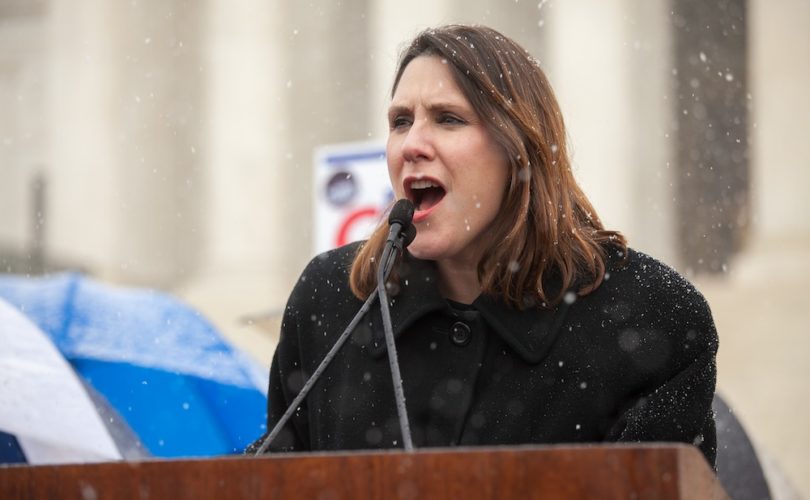 Charmaine Yoest, president of Americans United for Life, speaks at a rally in front of the U.S. Supreme Court during oral arguments for Sebelius v. Hobby Lobby.American Life League

Yoest is the former CEO of Americans United for Life, the “legal architect of the pro-life movement,” and a mother of five.

Speaker of the House Rep. Paul Ryan, R-WI, said Yoest's appointment demonstrates the Trump administration's commitment to the pro-life cause.

Congrats to @CharmaineYoest on appointment as Asst Sec of @HHS. Yet again, this admin demonstrates strong commitment to the #prolife cause.

HHS oversees Medicare, Medicaid, the Food and Drug Administration, and the Centers for Disease Control and Prevention. It has enormous influence on American healthcare policy.

Under the Obama administration, HHS mandated that religious employers like the Little Sisters of the Poor participate in the provision of employees' contraception. It went all the way to the Supreme Court, which ordered employers and the government to try to work out a solution.

It's still being litigated. The Trump Department of Justice is for the time being defending the mandate, even though Trump promised he'd undo it. Pro-life leaders are still optimistic that the administration will step in and protect religious freedom.

Yoest is very vocally opposed to the contraceptive mandate.

The man Yoest is replacing is Kevin Griffis, now Vice President of Communications at Planned Parenthood.

“She believes that embryos have legal rights and opposes birth control, like the IUD, that she thinks 'has life-ending properties,'” the article explains. She “takes pleasure in the idea of being the underdog fighting the liberal orthodoxy.”

The New York Times detailed Yoest's pleasant, gentle and warm demeanor, for which is she is known in D.C.

Yoest tweeted that she's “honored” to be serving Trump and HHS Secretary Tom Price in her new role.

Thank you so much @SpeakerRyan. Very grateful for these kind words.
And honored to be serving @realDonaldTrump and @SecPriceMD at @HHS. https://t.co/Rg8iQo6JAS