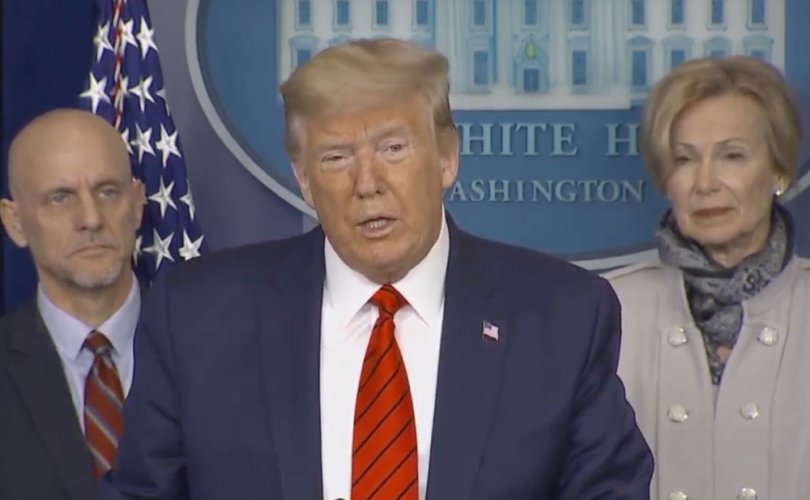 WASHINGTON, D.C., March 19, 2020 (LifeSiteNews) ― U.S. President Trump has just announced that the FDA has approved the use of a malaria drug to treat the Covid-19 coronavirus.

At a press conference today, the American president called the discovery a “tremendous breakthrough”.

“[It’s] a drug called chloroquine, and some people would add to that ‘hydroxy’,” Trump explained.

“Hydroxychloroquine. Now this is a common malaria drug. It’s also a drug used for [serious] arthritis. .. But it is known as a malaria drug, and it’s been around for a long time,” he continued.

“We know that if things don’t go as planned, it’s not going to kill anyone. … And it’s shown very, very encouraging early results.”

French researchers reported on March 17 that they had been able to treat successfully the Covid-19 coronavirus with hydroxychloroquine and azithromycin.

“I’d shake his hand, but I’m not supposed to do that,” he joked.

At the beginning of his speech, Trump referred to the disease as “the Chinese virus.” He also appeared to blame the Communist Chinese government for covering up the initial outbreak in Wuhan when he said that “if people had known about it, it could have been stopped right where it came from, China.”

He acknowledged that some people believe that the pandemic is an “Act of God”, but stated that he does not believe this.

“It’s just something that surprised the whole world,” he said.

He noted that the “whole world, almost, has been inflicted with this terrible virus.”

Trump also seemed optimistic about the development of a vaccine. He said such a vaccine would have to be thoroughly tested to make sure it would not harm people in the long run. He said his administration had “slashed red tape” to get vaccines and therapies developed.

“As you know, earlier this week we began the first clinical trial of a vaccine candidate for the virus, and it was launched in record time. It was just a few weeks and that would have taken years to do, not so long ago.”

He warned, however, that clinical trials for vaccines take a long time to ensure that “bad things” do not go into people’s bodies.