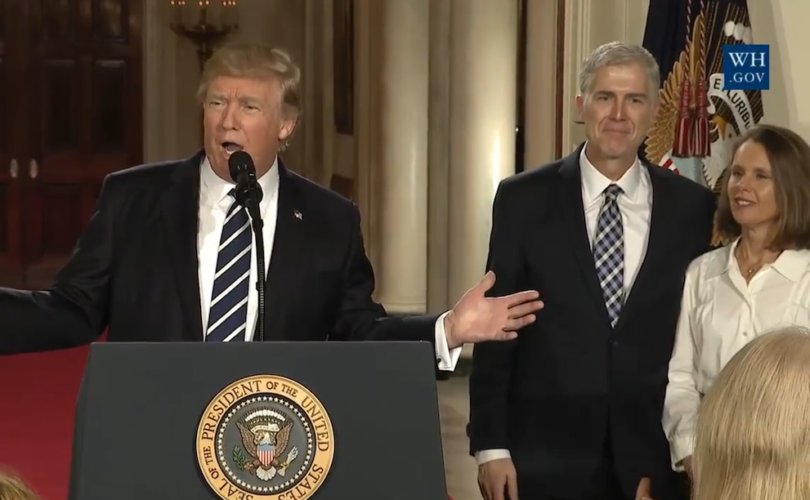 “When Justice Scalia passed away suddenly last February, I made a promise to the American people” to find “very best judge in the country for the Supreme Court,” said Trump. “I am a man of my word. I will do as I say, something that the American people have been asking for from Washington for a very, very long time.”

Trump said Gorsuch has a “brillant mind, tremendous discipline” and bipartisan support. Trump noted that a justice can serve for half a century or so.

Gorsuch, 49, is a favorite of social conservatives because of his pro-life views and his record defending religious liberty.

Gorsuch favored the Little Sisters of the Poor when dissenting from a 10th Circuit decision saying the nuns must be forced to formally cooperate with the provision of contraception. The dissent essentially said that the 10th Circuit “had shown insufficient deference to the Little Sisters’ own articulation of the tenets of their religious beliefs,” according to SCOTUS blog.

Gorsuch brought up Scalia in his speech tonight.

In 2009, Gorsuch wrote The Future of Assisted Suicide and Euthanasia, in which he argued that human life has intrinsic value and “that intentional killing is always wrong.” The nuanced book examined legal and ethical issues surrounding assisted suicide and euthanasia, as well as the roles patient autonomy and refusal of unwanted medical care play. Its publisher Princeton University Press calls the book “the most comprehensive argument against their legalization ever published.” Gorsuch studied under natural law expert John Finnis.

Gorsuch's resume is “as good as it gets,” Trump said. He is “someone who respects our laws…and who loves our Constitution.”

“I am so thankful tonight for my family, my friends, and my faith,” said Gorsuch. “These are the things that keep me grounded at life’s peaks and sustain me in its valleys.”

He said he is “honored” and “humbled” to be nominated.