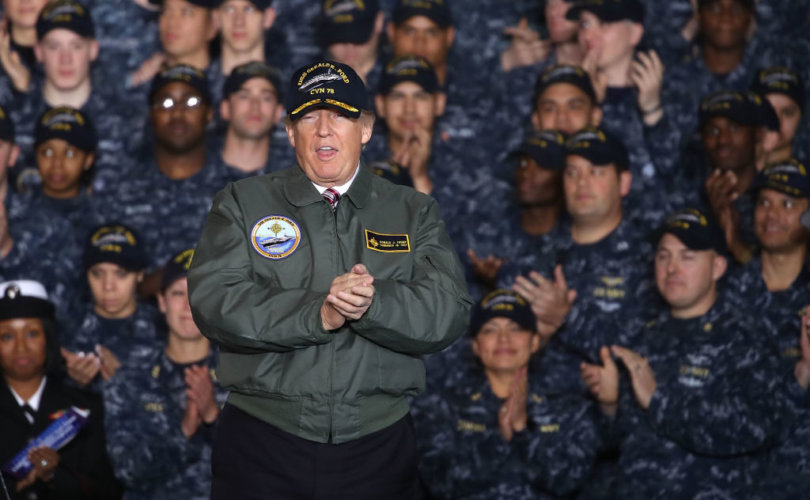 NEWPORT NEWS, VA - MARCH 02: U.S. President Donald Trump speaks to members of the U.S. Navy and shipyard workers on board the USS Gerald R. Ford CVN 78 that is being built at Newport News shipbuilding, on March 2, 2017 in Newport News, Virginia. Mark Wilson/Getty Images

September 9, 2020 (LifeSiteNews) – President Donald Trump confirmed in a tweet this morning that the U.S. Navy has reversed course and decided to renew contracts with Catholic priests to celebrate Holy Mass on military bases. Trump praised the Catholic priests for their “great compassion & skill.”

“The United States Navy, or the Department of Defense, will NOT be cancelling its contract with Catholic Priests who serve our men and women in the Armed Forces so well, and with such great compassion & skill. This will no longer be even a point of discussion!” he wrote in a tweeted in which he tagged New York Archbishop Timothy Cardinal Dolan.

A petition by LifeSiteNews signed by over 10,000 people, addressed to Commander of Navy Installations, Vice Admiral Yancy Lindsey, and Commander in Chief, President Donald Trump, argued that it is “blatant discrimination” against Catholics to cancel Masses while still offering services to other Christian denominations.

“THANK YOU!  I'm one of those priests who in the past contracted with the Navy.  THANK YOU!” he tweeted.

THANK YOU! I'm one of those priests who in the past contracted with the Navy. THANK YOU!