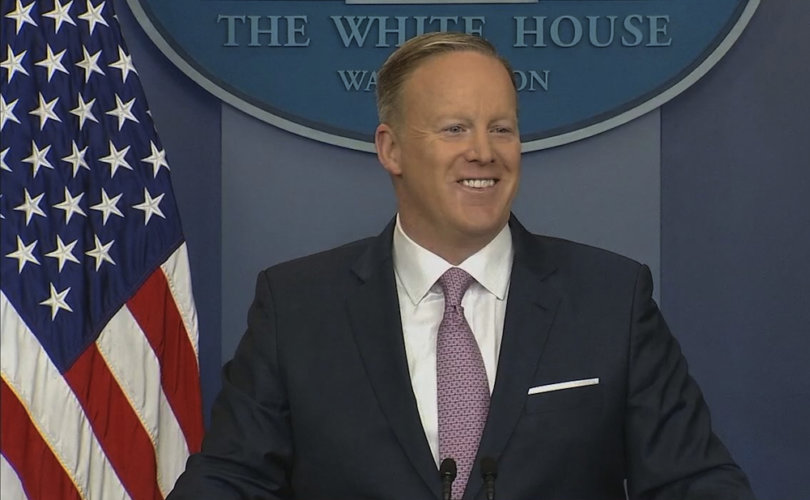 “I think it’s no secret that the President has campaigned as a pro-life President. It’s something that is very important to him, as evidence by the Mexico City Policy reinstatement he issued yesterday,” Spicer said.

“Obviously we’re going to have heavy administration presence there,” he added.

The March for Life takes place every year in the nation’s Capitol where hundreds of thousands of men, women, and children peacefully demonstrate against the 1973 Roe V. Wade Supreme Court decision that legalized abortion in the US. The marchers fight for what organizers call a “world where every human life is valued and protected.”

The theme for this year’s event is “The Power of One.”

Spicer told reporters that President Trump is on the side of life.

“It’s no secret that this administration and this president are going to do what they can to fight for life,” he said.

When asked if Trump would be participating personally at the event, Spicer said that people will just have to wait to find out whether it’s a “greeting of some sort or a call.”

He confirmed once again that Kellyanne Conway, the highest-ranking woman in President-elect Trump's administration and the first woman from either major party to lead a presidential candidate to victory in the general election, will be speaking at the event.

Conway will join other notable speakers including New York's Cardinal Timothy Dolan, former Planned Parenthood Director and founder of “And Then There Were None” Abby Johnson, Mexican Telenovela star Karyme Lozano, and author and radio host Eric Metaxas, Bishop Vincent Matthews of the Church of God in Christ, who advocates for adoption in the African-American community.

On Sunday a Trump administration official pointed out to NBC News the hypocrisy of mainstream media in covering events like the Saturday Women’s March while refusing to provide the same coverage to the March for Life.

“It's a shame that the March for Life, which estimates the same number of marchers in DC (650,000 in 2013) and will be happening next Friday, will not get anywhere near the same amount of coverage that this march got – and those pro-life members were NOT welcome at the Women's March,” the official said.

1
It’s beginning to look like the establishment will throw Zelensky under the bus to save face
2
How the US gov’t built a shadow structure that enabled COVID vax ‘bioterrorism’
3
Abp. Viganò: Our Lady’s humility is an intolerable affront to the ‘pride and disobedience’ of Satan
4
Dolly Parton says new song about God’s warning to avoid sin ‘came to me in a dream’
5
‘Never Again’ documentary takes deep dive comparing COVID propaganda with Nazi Germany
Subscribe to Daily Headlines »