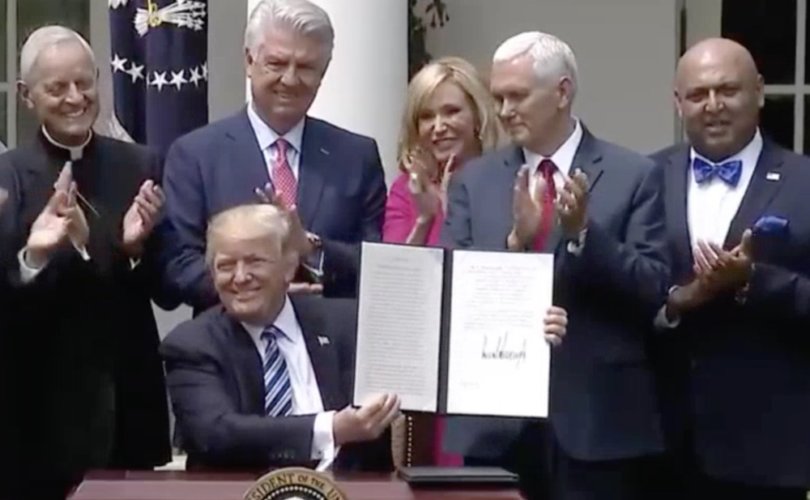 WASHINGTON, D.C., May 4, 2017 (LifeSiteNews) — President Donald Trump signed an executive order on religious liberty this morning. The order, titled “Promoting Free Speech and Religious Liberty,” allows churches to speak about politics from the pulpit while keeping their tax-exempt status and it provides regulatory relief for ordinary Americans who don't subscribe to gender ideology or believe in same-sex “marriage.”

However, religious liberty advocates say it does not go nearly far enough.

The Order was signed in the White House Rose Garden on the National Day of Prayer.

“Today my administration is leading by example as we take historic steps to protect religious liberty in the United States of America,” said President Trump during his speech.

“We will not allow people of faith to be targeted, bullied, or silenced anymore. And we will never ever stand for religious discrimination. Never ever,” he said.

During his speech, the president called up to the stage the Little Sisters of the Poor who were forced under the Obama administration HHS Mandate to pay for contraceptives for their employees.

The President said that “for too long the federal government has used the power of the state as a weapon against people of faith, bullying and even punishing Americans for following their religious beliefs.”

“No American should be forced to choose between the dictates of the federal government and the tenants of their faith,” he said.

During a September 2015 campaign speech at the Iowa Faith and Family Coalition, Donald Trump said the “first priority of my administration will be to preserve and protect our religious liberty.”

Trump’s promise was largely in reaction to the sufferings of Christians across America who were persecuted under the Obama administration’s push for the homosexual agenda.

Under Obama’s mandate, Christian bakers, wedding photographers, florists, counselors, healthcare workers, bed-and-breakfast owners and many others have been fined or lost their jobs for refusing to compromise their Christian beliefs on marriage and sexuality when asked to do so by homosexual activists.

During his Sept. 9, 2016 speech at the Value Voters Summit, Trump promised to “protect and defend” religious liberty.

A briefing of the Executive Order sent out by the White House earlier this week calls it a “policy” of the Trump administration to “protect and vigorously promote religious liberty.”

The briefing states that the Order will direct the IRS to “exercise maximum enforcement discretion to alleviate the burden of the Johnson Amendment, which prohibits religious leaders from speaking about politics and candidates from the pulpit.”

It also states that it will provide “regulatory relief for religious objectors to Obamacare’s burdensome preventive services mandate, a position supported by the Supreme Court decision in Hobby Lobby.”

Yep. White House emailed this document around last night as well. If the EO ends up being this, it'll be woefully inadequate. https://t.co/tXm3lj39eW

“During his campaign, President Trump stated that the first priority of his administration would be to preserve and protect religious liberty,” he said in a press release.

“The current outline of the Religious Liberty Executive Order released by White House officials recalls those campaign promises but leaves them unfulfilled,” he added.

Baylor said the Order offers “no specific relief” for Christians in America who are daily threatened to have their businesses closed for holding a religious point of view on marriage that differs from that of the federal government.

He also said the Order’s direction of the IRS to exercise discretion to alleviate the burden of the Johnson Amendment is inadequate.

“Americans cannot rely on the discretion of IRS agents, some of whom have abused that discretion for years to silence pastors and intrude into America’s pulpits,” he said.

“Nor does the outline do anything to prevent a future, hostile administration from wielding its power to penalize any church who dares exercise its constitutionally protected freedoms in a manner that displeases those in authority. A legislative problem like the Johnson Amendment demands a legislative solution like the Free Speech Fairness Act,” he added.

Baylor called on Trump to fulfill his promise on religious liberty, saying he should “protect the Little Sisters of the Poor, a host of Christian colleges, and others from having to choose between violating their consciences and paying crippling fines to the IRS.”

“A pledge to ‘provide regulatory relief’ is disappointingly vague, especially given the long existence of an obvious means of solving the problem: crafting an exemption that protects all those who sincerely object on religious and moral grounds so that they can continue to serve their communities and the most vulnerable among them,” he said.

“We strongly encourage the president to see his campaign promise through to completion and to ensure that all Americans — no matter where they live or what their occupation is — enjoy the freedom to peacefully live and work consistent with their convictions without fear of government punishment,” he added.

While Trump has come through on many of his pro-life campaign promises, protecting religious freedom and the pro-family cause has been less of a priority for his administration so far. The Trump administration is paradoxically still defending the contraceptive mandate. He has appointed a number of LGBT advocates to influential positions and extended Obama’s executive order forcing federal contractors to have “transgender-inclusive” nondiscrimination policies as a condition of doing business with the federal government.