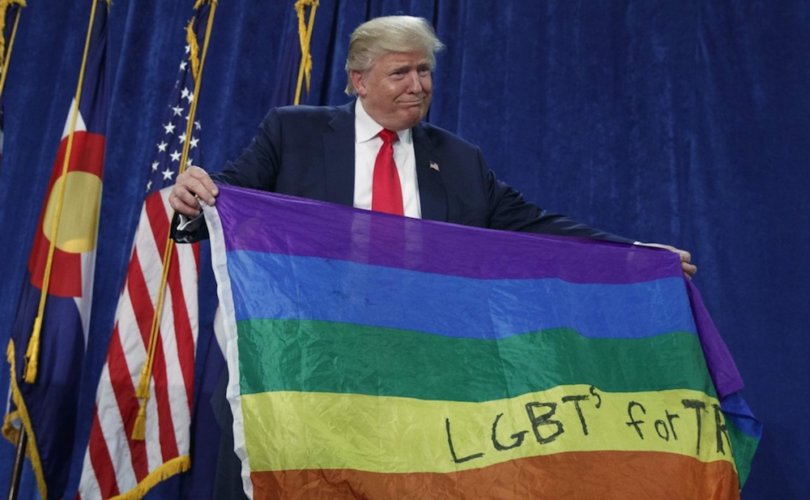 A draft of an executive order overturning Obama's 2014 mandate was circulating in Washington over the weekend. Yesterday, LGBT activist groups reacted with outrage at the possibility as rumors swirled.

In its statement, the White House press office insists Trump is “supportive of LGBTQ rights.” It adds that he was “proud” to be “the first ever GOP nominee to mention the LGBTQ community in his nomination acceptance speech.”

Trump's stance on the LGBT agenda was a concern for social conservatives during the primaries. He courted LGBT Republicans during his campaign, famously waving a rainbow flag at one of his rallies. He also endorsed the transgender bathroom agenda, inviting Bruce Jenner to use the women's bathroom at Trump Tower. He criticized North Carolina's bathroom privacy law, but said the bathroom issue should be left to states to decide.

However, Trump also promised to uphold religious freedom. He claims the Obergefell same-sex “marriage” ruling is “settled law,” yet has suggested he would appoint justices who support natural marriage.

“President Donald J. Trump is determined to protect the rights of all Americans, including the LGBTQ community. President Trump continues to be respectful and supportive of LGBTQ rights, just as he was throughout the election. The President is proud to have been the first ever GOP nominee to mention the LGBTQ community in his nomination acceptance speech, pledging then to protect the community from violence and oppression. The executive order signed in 2014, which protects employees from anti-LGBTQ workplace discrimination while working for federal contractors, will remain intact at the direction of President Donald J. Trump.”