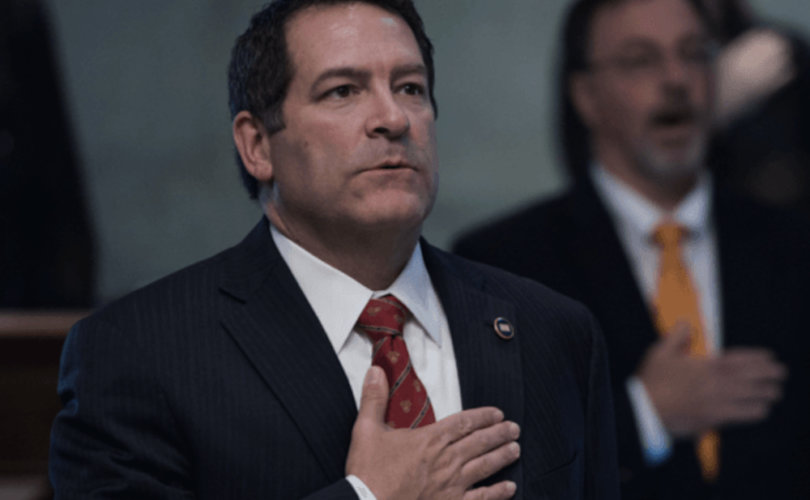 May 5, 2017 (LifeSiteNews) — Dr. Mark Green, President Trump’s choice for Secretary of the Army, withdrew his nomination today amid an escalating cascade of LGBT and leftist attacks portraying him as “hateful” based on distortions of his past statements.

“It is with deep regret I am withdrawing my nomination to be the Secretary of the Army,” Dr. Green said in a statement, reported by The Hill. He blamed “false and misleading attacks” against him and said he did not want to become a distraction.

“I am honored that President Trump nominated me for this position. I appreciate his support and confidence in me, as well as that of [Defense] Secretary [James] Mattis and many others, and their desire to Make America Great Again by preparing our military to face the many challenges in the world for the safety and security of our nation,” said Dr. Green, according to The Hill.

This is the second Trump nominee for Secretary of the Army to step aside. In February, his first choice, Vincent Viola, withdrew his name, citing potential conflicts of interest with his family businesses.

Whomever is finally confirmed for the position will succeed former President Obama’s Army Secretary, Eric Fanning, the first open homosexual to lead the Army. Fanning helped the effort to open up the military to “transgender” individuals, which was accomplished not by an act of Congress but by order of Obama’s Defense Secretary, Ash Carter.

LGBT activists were bitter and outraged that a conservative Christian with a public policy record of opposing the LGBTQ agenda was chosen to succeed a homosexual for the job. However, from a political perspective, the choice made sense for Trump: Homosexual activists were a key constituency of Obama, and evangelical Christians are the same for Trump.

Green’s departure comes a day after President Trump signed an executive order to defend religious freedom. Now some are wondering why more wasn’t done to support the Tennessee doctor’s nomination.

“The bully left is now openly creating an unconstitutional religious litmus test for public office. If you believe the Bible, or quote the Bible in public, they claim you are unfit for office and apply their political labels until you quit,” Chaplain Gordon Klingenschmitt told LifeSiteNews, reacting to Green’s withdrawal. “But we will not surrender to their bullying tactics. Christians have a Constitutional right to hold office, and a duty and mandate from God to redeem and sanctify the culture.”

“I call upon the Trump administration to double-down and appoint more Christians to higher office. Evangelicals helped win his election, and we can also petition Senators to help President Trump get them confirmed,” said Klingenschmitt, a former Colorado state representative and leader of the Christian pro-family group Pray In Jesus Name.

Dr. Green is a West Point grad and decorated U.S. Army flight surgeon. In 2010, he published a book, A Night with Saddam, about his face-to-face interview as a Special Ops flight surgeon with captured Iraqi dictator Saddam Hussein. Green had three tours overseas.

Green, who with wife Camie has two children, is the chaplain of the Tennessee Senate GOP Caucus. His extraordinary humanitarian record includes establishing a foundation that provides healthcare to underserved populations throughout the world and operating several free medical clinics. He is strongly pro-life.

But homosexual and “transgender” activists, working hand-in-hand with leftist, anti-Trump publications like Huffington Post, distorted Green’s record to make him look as hateful as possible. In one such smear-attack deconstructed by LifeSiteNews, activists took a radio interview comment in which Green talked about the biblical ideal of government’s role in rewarding good behavior and crushing “evil.”

Green said, “So I’m going to protect women in their bathrooms, and I’m going to protect our state against potential infiltration from the Syrian ISIS people in the refugee program.” But those comments were ultimately turned into Green calling “transgender” people “evil” and this short summary of Green by the LGBTQ media pressure group GLAAD: “Called the transgender community ‘evil’ that must be ‘crushed’ and compared LGBTQ Americans to ISIS.”

Green said in a Facebook post that “the only people I have ever called evil are murderous terrorists trying to kill Americans.” And he said, “I believe that every American has a right to defend their country regardless of race, ethnicity, gender, sexual orientation, gender identity, and religion. It's the radical left that won't allow the latter.”

Green was pilloried for stating as a Tennessee state senator that “transgender is a disease.” But one of the world’s most renowned psychiatrists, Dr. Paul McHugh, said in a 2014 column in The Wall Street Journal, “[P]olicy makers and the media are doing no favors either to the public or the transgendered by treating their confusions as a right in need of defending rather than as a mental disorder that deserves understanding, treatment and prevention.”

“This intensely felt sense of being transgendered constitutes a mental disorder in two respects. The first is that the idea of sex misalignment is simply mistaken — it does not correspond with physical reality. The second is that it can lead to grim psychological outcomes,” Dr. McHugh said.