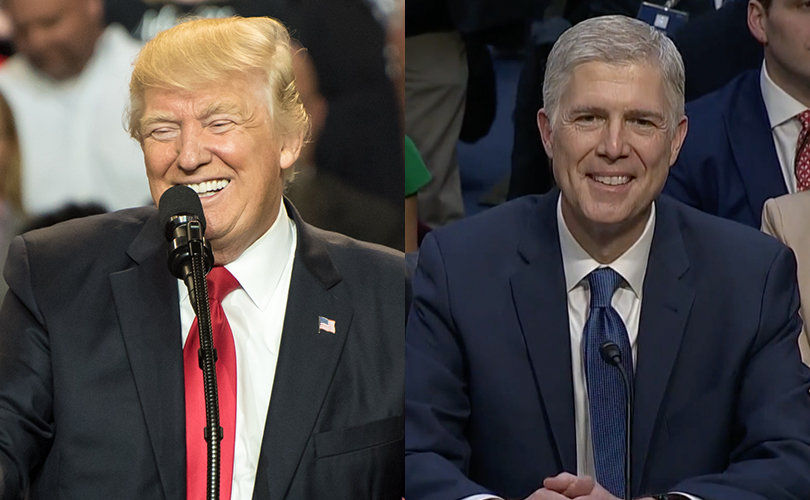 Gorsuch has won wide support from conservatives because of his “originalist” interpretation of the Constitution. Some social conservatives opposed or expressed concerns about his nomination because he has not taken a clear position against Roe v. Wade, and has said same-sex “marriage” is “absolutely settled law.”

Had Republicans not voted to change the rules by using what's called the “nuclear option,” Democrats would have been able to continue blocking Gorsuch's nomination.

This is the first time the “nuclear option” was used on a Supreme Court nominee. Democrats' actions were also an unprecedented attempt of a partisan filibuster of a Supreme Court justice.

“There's an anger and sourness in the land,” Minority Leader Sen. Chuck Schumer, D-NY, said this morning, as he explained his worries that Gorsuch's spot on the Supreme Court wouldn't help ordinary people.

Sen. Roy Blunt, R-MO, wished Gorsuch a “long and healthy life” during which he can use his “skills” on the high court.

“If you vote against a Neil Gorsuch, who can you support?” Sen. Orin Hatch, R-UT, asked Democrats. “Are you just gonna support people who do your bidding?”

“It's kind of a shame that we can't in a bipartisan way support” Gorsuch's nomination, said Hatch. He predicted President Trump will likely have the opportunity to nominate additional Supreme Court justices “who are great lawyers…who will bring great distinction to the Court” and “do the job that we all counted on the Supreme Court doing.”

Throughout more than 20 hours of confirmation hearings, Gorsuch refused to say how he would rule in future cases, or what his personal opinion of current precedent is.

Life and marriage issues came up multiple times during the hearings.

“There’s ongoing litigation about its impact and its application right now and I cannot begin to share my personal views,” said Gorsuch.

Gorsuch promised Sen. Lindsey Graham, R-SC, that he will consider the facts if a 20-week abortion ban reaches the Supreme Court. He didn't offer his personal opinion on it. Graham used the moment to explain why he plans to advance legislation banning late-term abortions on pain-capable human babies.

“We’re one of seven nations that allow wholesale, on demand, unlimited abortion at 20 weeks, the fifth month of pregnancy. I’d like to get out of that club,” said Graham.

Of particular concern to pro-assisted suicide and pro-abortion senators was a line Gorsuch wrote in The Future of Assisted Suicide and Euthanasia: “the intentional taking of a human life by private persons is always wrong.”

“This language has been interpreted by both pro-life and pro-choice organizations to mean he would overturn Roe,” said Sen. Dianne Feinstein, D-CA.

He hasn't authored or joined in any rulings that indicate his views specifically on abortion or same-sex “marriage,” but Gorsuch has ruled on cases pertaining to transsexualism and gender ideology. In these cases, defenders of life and family would find Gorsuch’s opinions to be encouraging.