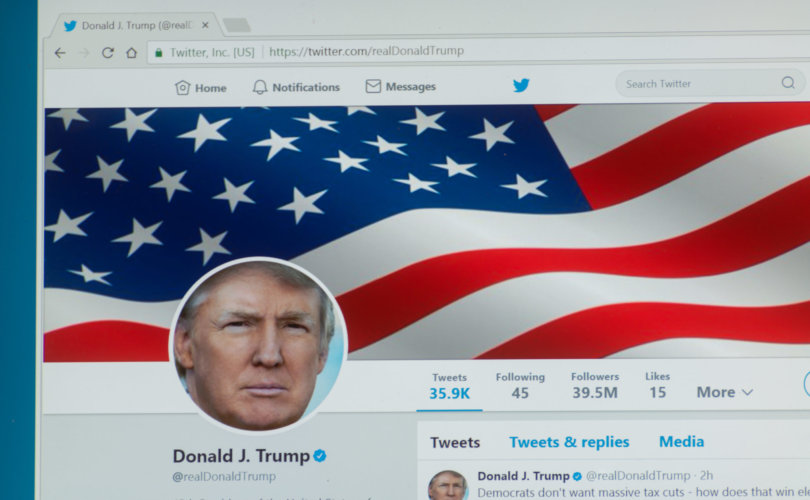 “After close review of recent Tweets from the @realDonaldTrump account and the context around them — specifically how they are being received and interpreted on and off Twitter — we have permanently suspended the account due to the risk of further incitement of violence,”  according to a statement from the Big Tech company.

After close review of recent Tweets from the @realDonaldTrump account and the context around them we have permanently suspended the account due to the risk of further incitement of violence.https://t.co/CBpE1I6j8Y

Sidney Powell, Lin Wood, and General Michael Flynn all were purged from the platform as well.

Trump had tweeted Friday, “The 75,000,000 great American Patriots who voted for me, AMERICA FIRST, and MAKE AMERICA GREAT AGAIN, will have a GIANT VOICE long into the future. They will not be disrespected or treated unfairly in any way, shape or form!!!”

He also posted a tweet announcing he would not attend Biden’s slated inauguration.

Twitter claimed that “these two Tweets must be read in the context of broader events in the country and the ways in which the President’s statements can be mobilized by different audiences, including to incite violence, as well as in the context of the pattern of behavior from this account in recent weeks.”

The company then alleged that Trump’s tweets broke its Glorification of Violence policy policy, which restricts posts that “glorify, celebrate, praise or condone violent crimes, violent events where people were targeted because of their membership in a protected group(.)”

Twitter has left up numerous accounts and posts directly advocating for the murder of the president and his supporters.

Militant Iranian dictator Ayatollah Khamenei, who denies the Holocaust and called Israel a “cancerous growth” to be “uprooted and destroyed,” also remains on the platform with nearly 1 million followers. He had strongly hinted at plans of violence against Trump and other Americans earlier this month, including in a tweet that has since been taken down.

Twitter and Facebook have aggressively singled out President Trump for censorship in the past and have blocked unfavorable coverage of legitimate news coverage about his opponents.