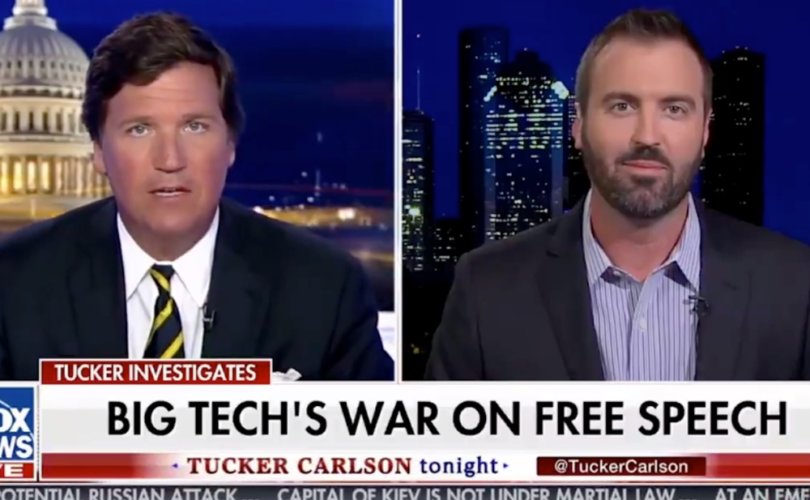 November 27, 2018 (LifeSiteNews) – Twitter has reinstated the account of Jesse Kelly, an Iraq veteran and senior contributor to The Federalist, just days after banning him from the platform without explanation.

On Sunday, the social media giant informed Kelly his account was being “permanently suspended” for “multiple or repeat violations of the Twitter Rules,” but didn’t cite any examples. Twitter’s apparent failure to give Kelly an explanation for banning him appears to violate the company’s own policies, which promise to “explain which policy or policies they have violated and which content was in violation” to anyone hit with a “permanent suspension.”

The move provoked a wave of condemnation from Kelly’s friends and fans, as well as from some center-right figures who personally dislike him but were nevertheless concerned about the free speech implications. Kelly also appeared on Tucker Carlson Tonight on Monday to discuss the censorship.

On Tuesday afternoon, the Daily Wire’s Ryan Saavedra announced that Kelly’s account has been reinstated, with his follower count gradually climbing back to its original 80,000.

It takes a while for the account to be fully restored

Twitter’s reversal follows not only pressure from conservative media, but multiple members of Congress getting involved. Republican Sen. Ben Sasse of Nebraska called Kelly’s case a “bad precedent for our free speech society,” while incoming Republican Sen. Josh Hawley of Missouri called for an investigation of whether Twitter targets political speech, which would violate its immunity from liability for the content it publishes.

Earlier Tuesday, an aide for the U.S. House Energy and Commerce committee told The Federalist that the committee is reviewing Twitter CEO Jack Dorsey’s September 2018 testimony to determine whether he lied to Congress when he claimed under oath that “we don’t consider political viewpoints, perspectives, or party affiliation in any of our policies or enforcement decisions, period.”

“Twitter has not yet provided responses to members’ questions for the record, despite an October 15th deadline,” the aide added. “It is important that Congress receive this requested information to ensure we are able to properly perform our oversight responsibilities.”

Many found Dorsey’s assurance hard to believe in light of his April endorsement of an article calling Republicans “the bad guys on the wrong side of history” akin to the slaveholding South, who must be “beaten, and badly” by a Democratic supermajority that must dominate American politics for at least a generation, as well as various ongoing controversies about Twitter restricting conservative content and users, including LifeSiteNews.

Twitter insiders have admitted to intentionally targeting conservative accounts and topics, and this summer the company admitted to excluding various prominent Republicans from its drop-down search menu. Kelly himself warned in August that social media giants’ banning of conspiracy theorist Alex Jones was the start of a slippery slope to silencing more mainstream voices.

It's long past time to haul @jack back before Congress, under oath, and force him to tell the truth about his previous testimony and his company's ongoing efforts to censor political content it doesn't like. https://t.co/CuPqFn7wAY

Good. Now I look forward to @jack’s full explanation, and how Twitter’s recent actions fit with his testimony to Congress. Under oath. Scrutiny needed here. https://t.co/PAKGMsA32a

Twitter and fellow social media giant Facebook have reversed numerous high-profile actions against prominent conservatives, typically explaining them simply as “errors.” The fact that such incidents keep happening, however, indicates the root cause remains unaddressed and fuels suspicions that the platforms are deliberately targeting conservative users.