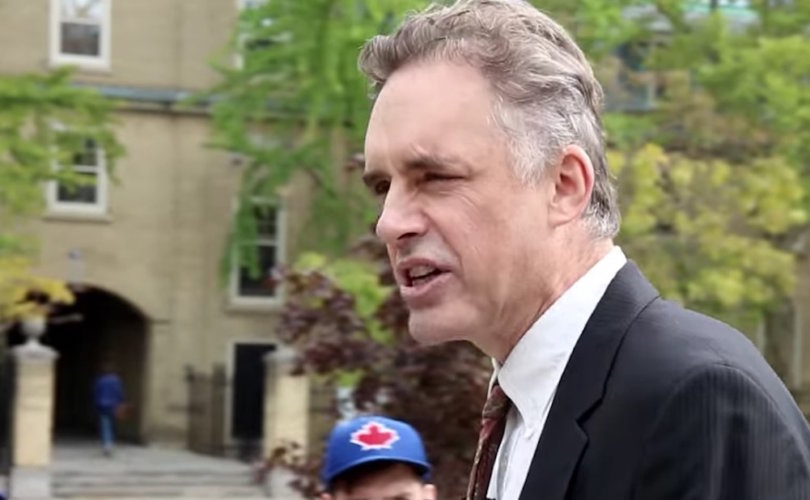 “No I’m bloody well not giving in,” he said. “The bloody cowards. I’m very disappointed with the University of Toronto for not standing up for free speech but it’s not unexpected. I guess they don’t think it’s very important. The university is dead.”

Peterson went on the warpath two weeks ago against what he called “totalitarian” federal and provincial legislation and human rights regulations requiring institutions and companies to ensure their employees address students, staff and the public with the pronouns appropriate to the gender of their choice. But he said he would use the pronouns with his students called for by their biological sex.

But in three videos he insisted he would use the pronouns appropriate to their sex and objected to the climate of repression caused by federal and provincial anti-discrimination laws and the university’s order to its human resources employees to take anti-discrimination instruction.

The videos went viral. He was condemned by transgender groups, targeted at a protest, and at a free speech rally in his support, his speech drowned out by yells and “white noise” from his opponents.

Now the university has sent him a letter, signed by arts and science dean David Cameron and faculty and academic life vice-provost Sioban Nelson, paying lip service to free speech, then accusing him of violating the rights of his transgender students.

“Your statements that you will refuse to refer to transgendered persons using gender neutral pronouns if they ask you to do so are contrary to the rights of those persons to equal treatment without discrimination based on their ‘gender identity’ and gender expression,’” their letter states.

The letter reports that violence has been threatened against trans students and implies his videos are to blame. “We trust that these impacts on students and others were not your intention in making these remarks. … However, in view of these impacts, as well as the requirements of the Ontario Human Rights Code, we urge you to stop repeating these statements.”

“What they’ve done is they talked to their lawyers who’ve told them they could be charged with breaking the law if they let me continue to say what I’m saying,” Peterson told LifeSiteNews.

He said the university was itself giving in to pressure from a tiny group called the Black Liberation Collective, which, he claimed, “refuses to disavow violence,” and yet he is the one being implicitly accused of inciting violence. “Now I understand 250 professors have signed a letter decrying the climate of violence. But will they sign a letter condemning the actual assault against a Rebel media reporter Lauren Southern at a free speech rally? No, of course not.” Southern was shoved while covering last week’s free speech rally in support of Peterson.

Peterson has accused the university professoriate of collaborating in what he calls the “PC Game”. He describes the PC Game as a tactic of the political Left whereby those who are successful in society are identified as predators and everyone else as victims. The Left then takes up the cause of the victims and attacks the predators—companies, administrators, institutions, the wealthy, whites or males.

Peterson countered the PC Game by printing up Anti PC stickers for sale to supporters.  He them urged to affix them to the many politically correct posters and messages with which university campuses abound. These have proved so popular he has gone into second printing, and sold 8,000.