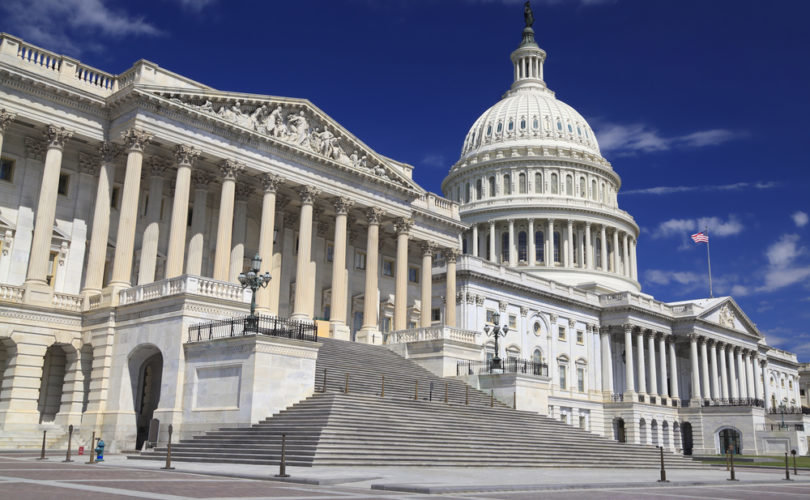 WASHINGTON, D.C., May 13, 2015 (LifeSiteNews) – The United States House of Representatives has passed a ban on most abortions after 20 weeks' gestation, ending four months of often vitriolic debate among Capitol Hill Republicans and pro-life activists about the contentious piece of legislation.

The bill passed 242-184, largely along party lines, with one member voting present. Four Republicans broke ranks and voted against the bill, while four Democrats voted in favor.

President Obama has previously vowed to veto the bill, should it pass both the House and the Senate.

The passage of the bill comes on the second anniversary of the conviction for murder of late-term abortionist Kermit Gosnell. Gosnell was convicted on three of four charges of murdering babies born alive after failed abortions. Gosnell's former staff members testified that the abortionist murdered “hundreds” of newborn babies in this way, often by “snipping” their spinal cords post-birth.

The vote on the bill was originally scheduled to coincide with the annual March for Life in January, but objections from Rep. Renee Ellmers, R-NC, and several other female GOP House members forced a delay.

The Members said they did not support a rape exception that allowed a woman to have a late-term abortion only if she reported the crime to police before aborting her child. Their opposition led to changes in the bill, including the removal of the reporting provision for adults.

The provision was replaced with a requirement that abortionists ensure that rape victims have received either medical treatment or licensed counseling a minimum of 48 hours prior to the late-term abortion. The counseling cannot be done at a facility that also does abortions, unless the abortion clinic is inside a hospital.

Other changes include, but are not limited to, the addition of language that requires the presence of a second doctor in the case of such abortions, in case the child is born alive. The bill mandates that a child who survives a late-term abortion is to be cared for in the same way as any premature child, and a woman can sue if this part of the bill is violated.

Accountability and reporting laws are also enhanced under the bill, and informed consent is required.

However, the legislation provides an exception to the informed consent and second doctor provisions, as well as a provision requiring the late-term abortion to be done “only in the manner which…provides the best opportunity for the unborn child to survive.”

The bill allows the exception of these requirements, “would pose a greater risk of the death of the pregnant woman; or the substantial and irreversible physical impairment of a major bodily function, not including psychological or emotional conditions, of the pregnant woman.”

In a public statement provided to LifeSiteNews, Rep. Trent Franks, R-AZ – H.R. 36's main sponsor – said that “this proposal is substantially stronger than the original bill, and it places the focus back upon protecting mothers and their innocent little pain-capable babies, from the beginning of the sixth month until birth.”

While Senator Rand Paul's office declined to comment on H.R. 36's passage, the GOP presidential candidate did tell LifeSiteNews, “I am 100% pro-life.”

“I believe life begins at conception and that abortion takes the life of an innocent human being,” said the Kentucky senator. “It is the duty of our government to protect this life as a right guaranteed under the Constitution.”

Presidential candidate Carly Fiorina told LifeSiteNews that “the Democrats' platform is that a life isn't a life until it leaves the hospital. It is extreme. It is hypocritical. It is wrong.”

Rep. Alex Mooney, R-WV, called H.R. 36 “an important step in protecting the unborn” in a speech on the House floor, while House Speaker John Boehner, R-OH, said on the House floor that “H.R. 36 is the most pro-life legislation to ever come before this body.”

H.R. 36 “reflects the will of the American people,” and “also reflects the contributions of many people and perspectives,” said Boehner.

The symbolic timing of the passage of the bill was not lost on many pro-life leaders. Maureen Ferguson, a senior policy advisor with The Catholic Association, said in a statement, “on the anniversary of Dr. Kermit Gosnell’s conviction, whose trial opened our eyes to heartbreaking realities in the abortion industry, it is fitting that the U.S. House will vote to ban late-term abortions.”

“Dr. Gosnell sits in jail because his reckless incompetence led him to kill premature babies born alive, but at least 140 other late-term abortion doctors continue to legally abort 18,000 babies annually past 20 weeks by industry approved techniques like dismemberment,” said Ferguson, who noted that “overwhelming majorities of Americans recognize the humanity and human rights of a premature baby, and are opposed to the violence inherent in late-term abortion.”

LifeSiteNews reached out to the Hillary Clinton campaign, as well as the Democratic National Committee, for comment, but neither organization responded by press time.

H.R. 36 now moves to the U.S. Senate, where it is expected to be introduced by South Carolina Republican Senator Lindsey Graham. It is unlikely to pass the Senate due to Democratic opposition.