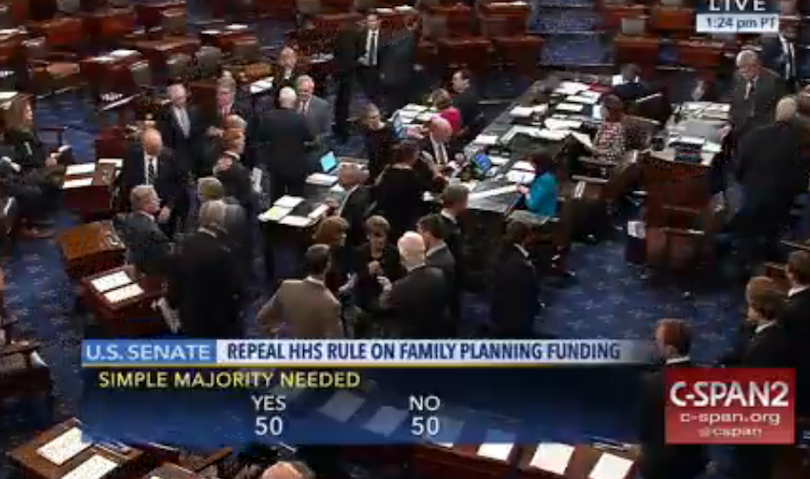 WASHINGTON, D.C., March 13, 2017 (LifeSiteNews) – Vice President Mike Pence broke a tie in the U.S. Senate today to overturn an Obama-era regulation forcing states to give Title X money to organizations that commit abortions. The Senate voted 50 to 50 to overturn the abortion-facility-enabling regulation.

Sen. Susan Collins, R-ME, and Sen. Lisa Murkowski, R-AK, voted against allowing a vote on the bill. The Senate was tied at 50-50 on whether to allow a vote, so Pence broke the tie. Collins and Murkowski then voted against the bill, causing another 50-50 tie that Pence broke.

This was the first abortion-related vote in the Senate since the 2015 vote on the Pain-Capable Unborn Child Protection Act, according to the Susan B. Anthony List.

Title X money comes from the government to fund “family planning services,” but technically not abortion. Pro-life advocates point out that government money Planned Parenthood receives helps the abortion-centered organization overall, and that such money is fungible.

On February 16, the U.S. House voted 230 to 188 to overturn this regulation. Congress is able to overturn it because of the Congressional Review Act, which allows it to undo such agency regulations within 60 legislative days.

“We thank Senate Majority Leader McConnell and Sen. Joni Ernst for their leadership to advance H.J. Res. 43 in the Senate,” said Marjorie Dannenfelser, President of the Susan B. Anthony List. “Today’s vote builds momentum for the effort to use reconciliation to redirect Planned Parenthood’s largest source of government funding, Medicaid, to the nationwide network of community health centers.”

Sen. Patty Murray, D-WA, spoke on the Senate floor against the bill multiple times. Last night, she spoke at a Planned Parenthood rally on Capitol Hill. Sen. Richard Blumenthal, D-CT, blasted Republicans for their “unmitigated desire to cut women's access to healthcare” and for leaving the Senate chamber because they ran out of floor time.

Democrats spoke against the bill throughout the afternoon before the vote, which began shortly before 4:00 p.m. They repeatedly implored one more Republican to join them in voting against the resolution.

Blumenthal praised Planned Parenthood and said he recently met with some of its workers.

Many people are “voiceless in these halls,” said Blumenthal. It would be “inhumane” to allow states to redirect their Title X funding away from Planned Parenthood. Planned Parenthood is America's largest abortion provider.

Thank you, Vice President @mike_pence, for standing for life & the right of states to defund @PPact, America's corrupt abortion corporation.

In an email to supporters, David Christensen, Vice President for Government Affairs at the Family Research Council, called the Obama-era rule this vote overturned a “backdoor handout for the abortion industry.”

“States should be free to allocate funds in a way that clearly keeps family planning and abortion separate, by not funding organizations that participate in abortion,” wrote Christensen. “When Planned Parenthood or other abortion clinics receive Title X grant funding, it frees up resources for them to spend more on abortion, their main source of non-governmental service income.”

The bill is now headed to President Trump's desk.