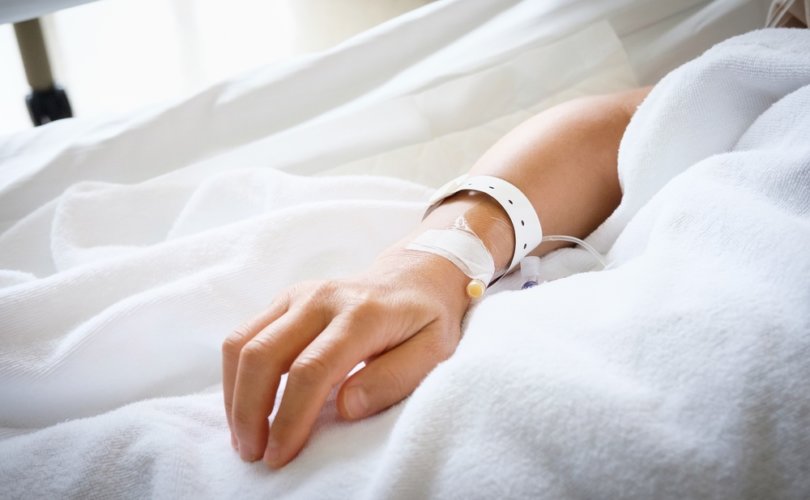 LONDON, England, December 23, 2020 (LifeSiteNews) — An online British appeals court has denied an attempt by family members to preserve the life of a Polish man who is lying in a coma in England.

Lady Justice King and Lord Justice Peter Jackson stated today that they did not accept arguments to allow an appeal of a lower court decision ruling that artificial ventilation, nutrition and hydration should be removed from the middle-aged man.

The patient, known publicly only as “P” or “RS”, suffered severe brain damage after a heart attack at his home in England’s West Midlands in November. He is currently in a coma, and doctors believe that he will spend the rest of his life in a “minimally conscious” state. According to a British “Quality of Life” assessment, his continued life would not be “meaningful.”  A legal team for the University Hospitals Plymouth NHS Trust, which is responsible for RS’s care, asked a Court of Protection to rule that it would be lawful to discontinue life-sustaining treatment for RS. This would include the removal of his feeding and hydration tubes.

RS's wife, who has testified that RS said that he never wanted to be a “burden on his family,” supports the NHS’s application that all medical intervention sustaining his life should end. However, RS’s extended family, including his mother and sister in Poland, and a sister and niece in England, object to his state-sanctioned killing, arguing that as a church-attending Roman Catholic who was opposed to both abortion and euthanasia, RS would not wish his life to end in this manner.

In a hearing held on December 15, Mr Justice (Jonathan) Cohen sided with the NHS and RS’s wife and children, saying that removal of life support would be in RS “best interests.” Regarding the discrepancies between RS’s birth family’s statements about his Roman Catholic beliefs, and his wife’s belief that RS would not want to be kept alive in his current circumstances, Cohen decided that his wife knew him better than his birth family.

David Lock, QC, the solicitor for RS’s mother and birth family, argued, in his application for an appeal, that there had been a procedural error in that the patient’s beliefs were not sufficiently addressed. Lock stated that, had the hearing not been so rushed, the “tenets of the Catholic faith” would have been made clearer to the court.

Neither Lady Justice King nor Lord Justice Peter Jackson seemed sympathetic to this argument, especially as Lock did not state that there should have been expert testimony from an authority on Catholic teachings. Jackson said that Justice Cohen had acknowledged that the Catholic Church is in “favor of preserving life” and that Cohen had understood that.

What is not clear from the application appeal is whether or not Cohen understood that the Catholic Church absolutely condemns the killing of vulnerable patients through the withdrawal of care leading to death by starvation and/or dehydration. However, it was clear that to what extent RS adhered to the teachings of the Catholic Church, and what light his most intimate conduct shone upon that, was certainly examined, even to the extent that his irregular marriage was taken as evidence that he might have dissented on the Church’s teachings regarding end-of-life care.

Lady Justice King, known for her role in the state-sanctioned killing of Alfie Evans, argued that RS was estranged from his birth family, a point which Lock contested. It is clear, however, that RS’s wife is estranged from her in-laws, for she has not spoken to RS’s mother since her marriage to RS 17 years ago. King also seemed to argue that RS was not a faithful Catholic, having married a divorcee and not being able to receive Communion.

It was, however, pointed out during the application that RS habitually went to Mass once a month. Meanwhile, according to the extended family’s testimony, repeated in Lord Justice Jackson’s decision, RS had been very compassionate towards ailing, elderly relations, opposed abortion and euthanasia, and that it was a matter of great pain to him that he had not been able to get an annulment and resume receiving Holy Communion.

It also emerged that, upon being questioned regarding her testimony, RS’s wife became distraught and Justice Cohen had called an end to that particular proceeding.  Lock had suggested that this, and the submission of a private letter by the wife to Cohen about her premarital relationship with her husband, were also errors.

In his judgment, however, Lord Justice Jackson disagreed with all of Lock’s arguments that procedural errors had occurred and that a new hearing should be held. Jackson stated that there was no right to cross-examination. He also said that it had been shown to the court that RS had made personal decisions against the tenets of the Catholic faith, and so his wife’s private letter to the judge about their premarital relationship did not determine the decision.

Lady Justice King agreed with Jackson’s judgement and expressed condolences, first to RS’s wife and children, and then to his birth family. None of the family members were visible during the online session.

After the judgement, Lock stated that RS’s mother would like to travel to Britain from Poland to say good-bye to her son before his death and noted that this may take some time, given the current travel restrictions and quarantine. King acknowledged this wish, but made it clear that there was “no stay on the order.”

A court order forbids the publication of the names of RS and his family members. Recording the court session would have been a criminal offense.

Roger Kiska of Christian Concern told LifeSiteNews today that Lady Justice King’s remark’s doubting RS’s adherence to Catholic beliefs about end-of-life care given his marriage to a divorcee was “a secular inference that was really inappropriate.”

“My opinion is that judges should never do theology,” he said.