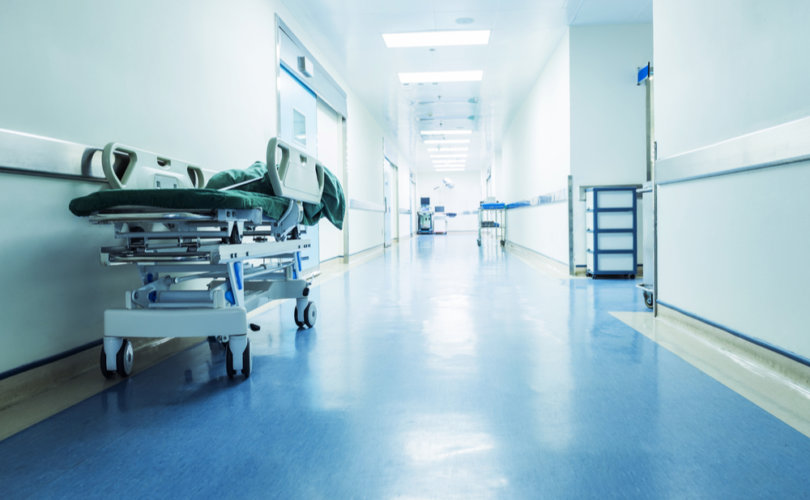 LONDON, England, January 18, 2021 (LifeSiteNews) — According to a new court order, a Polish Consul General will not be able to visit a Polish Catholic with a prolonged disorder of consciousness dying in an English hospital tonight due to his hydration and nutrition having been removed.

Justice Cohen has just acceded to a request by the University Hospitals Plymouth NHS Trust that the Polish official not be allowed to visit the Polish citizen or to assist a Polish doctor in examining the patient remotely by video. The court was told that two consular officials were already on their way to the hospital to ensure the U.K. was not allowing the patient’s rights to be breached.

It is the latest defeat for the birth family of the Polish patient known to the English-speaking public only as “RS.” On December 15, 2020, Cohen gave an order permitting the National Trust foundation, which has custody of the disabled man, to withdraw RS’s life-supporting treatment. As RS could breathe for himself, this meant removing his clinically assisted nutrition and hydration. Although RS’s wife has agreed to this measure, RS’s birth family, including his mother, two sisters and niece, have consistently fought against it.

In his submission to the court, James Bogle, the barrister for RS’s birth family, cited Article 36 of the 1963 Vienna Convention on Consular Relations. According to the Convention, “consular officials shall be free to communicate with nationals of the sending State and have access to them” (36 a). Bogle argued that Polish consular authorities have the right to make sure that the human rights of their nationals are being respected and that this is a treaty obligation between Poland and the United Kingdom. Bogle asked the court not to “compel” the NHS Trust to prevent the UK from fulfilling its obligations.

The barrister said the court should make an order to allow RS hydration and nutrition so that he not die before the Polish government could approach the U.K. government to see if it is fulfilling its obligations under the Convention. He also submitted that the NHS Trust ought to allow the Polish doctor proposed to examine the patient and sought a declaration that it would not be unlawful for the NHS to allow the Polish Consul to assist “Dr S” in performing the examination. He argued that there was no evidence that either the visit or the examination would be outside of RS’s best interests.

Katie Gollop, QC, the legal representative of the Official Solicitor acting on behalf of RS, opposed Bogle’s arguments. She held that there is no reason for the Polish Consul General to visit RS, and that there is no evidence that the National Health Service is treating RS badly. Gollop revealed that the Official Solicitor does not believe RS’s best interests are not being served by the NHS.

Justice Cohen stated that RS’s wife is “strongly opposed” to the consular visit and to the medical examination. This last point was questioned by Bogle, who said that RS’s wife had stated to the Polish Consul that she was not against Dr S’s examination of her husband, as proposed by the Polish Consul. However, it was intimated by Gollop that RS's wife may have said that because “harsh” things have been said about her online. Bogle objected to that characterization.

In his judgement, Justice Cohen summed up what he thought were the most important points of his December 15 decision: that it was not in RS’s “best interests” to continue life-supporting treatment, that it was in his “best interests” to be given palliative care, including the hydration deemed necessary for that, and that in all his treatment he retain the “greatest dignity” and suffer the least discomfort possible until he dies.

Justice Cohen noted that the birth family’s long battle to overturn his order had not been supported by the NHS Trust or the wife, and that their appeals to both the U.K. Court of Appeal and the European Court of Human Rights had been refused. He observed also that on “no less than three occasions” RS’s nutrition and hydration had been “removed and reinstated.” He stated that this situation must have caused “distress” to RS’s wife and children and that there could have been “no greater assault” on RS’s dignity.

Justice Cohen allowed that Bogle had made a new argument in citing the impact of the Vienna Convention. However, he said that he had to look at RS’s best interests, and was satisfied that RS would not have wished to see the Polish Consul. He opined that the primary purpose of the visit was for Dr S to examine the patient remotely and that any evidence arising from the examination would have “relatively little weight.” He said there was no reason to doubt the evidence of the NHS staff who had been attending RS for two months.

There was a delay before Justice Cohen presented his judgement, as RS’s wife wished to discuss a matter with the Official Solicitor. She accused the birth family of giving live interviews about the hearing in Poland and of showing photographs of RS’s children on Polish television. Bogle objected to these allegations.

RS’s identity, and the identity of his wife, children, birth family and doctors are all protected by a transparency order. The transparency order has been violated by a number of people and publications in Poland. Video footage of RS has been published on social media and on Polish television, including its national station, TVP. As the hearing began, Justice Cohen addressed the members of the public attending the online hearing, saying that the publication of the videos was “particularly distressing” and that he “absolutely abhor[s] that.” He indicated that he would treat breaches of the transparency order severely. In the U.K., contempt of court carries a custodial fine of up to two years.

— Article continues below Petition —
UPDATE: Polish pro-life Catholic passes away in British hospital after being denied food and water (+RIP)
Show Petition Text
29775 have signed the petition.
Let's get to 30000!
Thank you for signing this petition!
Add your signature:
Show Petition Text

According to a press release by the Christian Legal Centre, which is supporting the birth family, the case has strained relations between Poland and the U.K. “On the instructions of President Andrzej Duda, Polish Secretary of State Krzysztof Szczerski urgently summoned the British Ambassador to discuss the case this afternoon. After the meeting, Mr Szczerski tweeted: ‘I must admit that the conversation was difficult.’”

This case, which has become a cause celebre in RS’s native country, has thrown cultural differences between the U.K. and Poland in sharp relief. In the U.K., the withdrawal of hydration and nutrition from a patient with a prolonged disorder of consciousness so that he will die is not considered passive euthanasia. However, the same practice is considered barbaric in majority-Catholic Poland, and Britain is taking a beating in the comments of Polish and British Polish-language publications.

RS has received neither hydration nor nutrition since Thursday and is expected to die in a matter of days, if not hours.