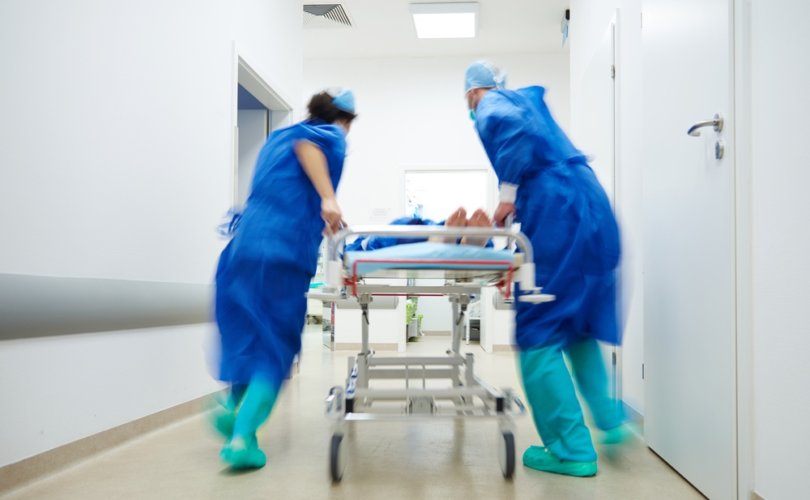 LONDON, England, February 11, 2021 (LifeSiteNews) — A U.K. government vaccine safety review has revealed that 244 people, including 8 unborn babies, have died in Britain shortly after receiving one of two coronavirus vaccines. The government has said that it does not believe the inoculations are responsible.

An extensive report produced by the U.K. government today has detailed all the suspected side effects, including death, reported by medical staff or the people who received at least one Covid-19 vaccine between early December 2020 and January 31, 2021. The two vaccines currently in use in the U.K. are the Pfizer/BioNTech and the Oxford University/AstraZeneca. They were authorized by the country’s Medicines and Healthcare products Regulatory Agency (MHRA).

The MHRA has received 143 UK reports of suspected ADRs to the Pfizer/BioNTech vaccine in which the patient died shortly after vaccination, 90 reports for the Oxford University/AstraZeneca vaccine and 3 where the brand of vaccine was unspecified. The majority of these reports were in elderly people or people with underlying illness. Review of individual reports and patterns of reporting does not suggest the vaccine played a role in the death.

The report included in its ancillary material the information that 5 miscarriages were reported after the use of the Pfizer vaccine and 3 after the Oxford vaccine.

The MHRA monitors the safety of the vaccines as they are used on the public, and to this end they introduced a “Yellow Card Scheme” to collect reports of any suspected side effects. 20,319 Yellow Card reports, including a total of 59,614 suspected adverse reactions, were made regarding the Pfizer vaccine. 11,748 were made regarding the AstraZeneca vaccine, which was rolled out only on January 4, 2021. 72 Yellow Card reports did not specify which vaccine was used.

The government’s report states that there were 3 – 4 Yellow Card reports per 1,000 doses, and stressed that the vast majority of inoculations have not been reported as having side effects. By January 31, it says, an estimated 6.6 million first doses of the Pfizer vaccine and an estimated 3 million first doses of the Oxford vaccine had been administered. In addition, half a million second doses, mostly of the Pfizer vaccine, had been used.

The report also explains that the number of Yellow Cards submitted was not unusual for a new vaccine which the public and medical professionals have been encouraged to review. It also says that there have not been as many Yellow Cards for the public use of the vaccine as there were reports of adverse reactions during the clinical trials.  For both the Pfizer and the Oxford vaccines, there were more than 1 in 10. Interestingly, the side effects for both vaccines are said to be “milder” and “less frequent” in people aged over 75.

The British roll-out has so far affected mostly the British elderly over 75, medical professionals and co-workers. The Yellow Card report says that the “overwhelming majority” of side effects happen soon after the vaccination and do not lead to complications:

For both vaccines, the overwhelming majority of reports relate to injection-site reactions (sore arm for example) and generalised symptoms such as ‘flu-like’ illness, headache, chills, fatigue (tiredness), nausea (feeling sick), fever, dizziness, weakness, aching muscles, and rapid heartbeat. Generally, these happen shortly after the vaccination and are not associated with more serious or lasting illness.

However, there have been reports of more serious damage associated with the vaccine, notably anaphylaxis and Bell’s Palsy. Now 130 “spontaneous adverse reactions associated with anaphylaxis or anaphylactoid reactions” in Britain have been reported for the Pfizer vaccine, and 30 have been reported for the Oxford vaccine. Bell’s Palsy, which involves facial paralysis or weakening of the facial muscles, has been reported 99 times for the Pfizer vaccine and 15 times for the Oxford vaccine. The MHRA says that because this ailment “can also occur naturally, an association with the vaccine in not yet confirmed.”

The report says that a “range” of “isolated or series of reports” of other serious suspected adverse reactions have been reported. It also said, however, that there were “currently no indications of specific patterns or rates of reporting” suggesting that the vaccines have been responsible for them. But its links to specific reports attached to each vaccine do show a clear picture of hundreds, or even thousands, of particular reactions that would be unpleasant to experience.

A total of 59,614 suspected side effects were recorded after use of the Pfizer/BioNTech vaccine.

The link to the Pfizer vaccine analysis shows clearly that 1,437 blood disorders have been reported after inoculation, 1,204 of them being lymphadenopathy (enlarged or swollen lymph nodes). 712 cardiac disorders were reported, notably palpitations (303) and a speeding heart rate (230). 445 ear disorders were reported, including vertigo (146), ear pain (122), and varying amounts of hearing loss (31).

Ironically, there were 1,186 reported infections, including 308 cases (including “suspected cases”) of Covid-19 itself, 231 cases of influenza, and 154 upper respiratory tract infections.

There were 224 injuries reported, and 357 metabolic disorders, of which 252 were decreased appetite. 8,129 muscle and tissue disorders were mentioned, of which 2,690 were muscle pain and 1,704 were joint pain. 11,160 nervous disorders were reported, including 5,506 headaches, 1,546 cases of dizziness, 45 seizures, 15 cases of paralysis, and 1 case of locked-in syndrome. There were 5 miscarriages reported.

Of the 830 psychiatric disorders reported, 162 were insomnia, 112 cases of being in a confused state, and 73 bouts of anxiety. Of the 120 renal & urinary disorders, 35 were renal pain and 12 were urinary incontinence. There were 187 reproductive and breast disorders mentioned, of which 31 were breast pain and 22 menorrhagia (heavy periods).

A total of 42,649 suspected side effects were recorded after the use of the Oxford University/AstraZeneca vaccine.

There were 456 references to eye disorders, including 191 reports of eye pain, 53 accounts of blurred vision, and 8 of blindness. 4,693 gastrointestinal orders were reported, among them 2,320 cases of nausea, 479 cases of diarrhea, 862 cases of vomiting, and 235 cases of abdominal pain. Of the 15,644 “general disorders” reported, 2658 were fatigue, 4562 were fevers,2971 were chills, 100 were vaccination site pain, 579 were “influenza-like illnesses.” There were 90 immune system disorders, again mostly hypersensitivity (39) and anaphylactic reactions (28).

With the Oxford vaccine there were 695 reported infections, including 42 cases (including 2 “suspected cases”) of Covid-19 itself, 358 cases of influenza, and 74 upper respiratory tract infections.

Of the 1,030 respiratory disorders reported, 282 were cases of difficulty in breathing, 209 were sore throats, and 169 were cases of coughing. 2,052 skin disorders were reported, especially excessive sweating (615), rashes (271) and itchiness (224. The 337 vascular disorders on record included 121 hot flushes.