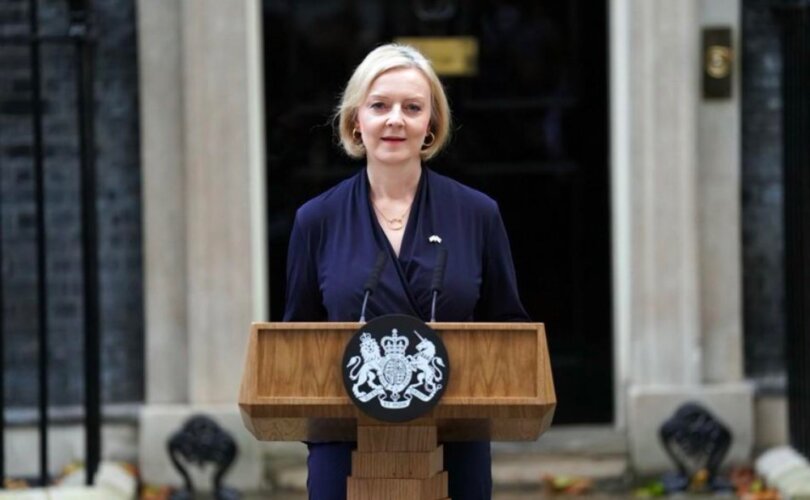 In a statement delivered outside Number 10 Downing Street, Truss declared, “I cannot deliver the mandate on which I was elected by the Conservative Party.”

The Conservative PM added that “there will be a leadership election to be completed within the next week” to decide her successor. She will remain as acting Prime Minister until a successor is announced, which will be by October 28.

Truss was chosen by Conservative party members as the successor to former PM Boris Johnson, who resigned in July amid increasing controversy regarding his personal violation of his government’s own COVID lockdown restrictions and the resignation of several of his ministers and officials.

Truss’s decline has been much more swift than Johnson’s, with political commentators suggesting it was “inevitable” since she sacked her Chancellor of the Exchequer – Kwasi Kwarteng – after he held the post for just 38 days.

In the past few days, the Truss government has crumbled around her, with her Home Secretary resigning on October 19, followed by a revolt by Conservative MPs on a fracking vote, and the reported resignation of the Chief Whips.

Truss’ resignation has sparked renewed calls for a general election, with polls suggesting that the left-wing Labour Party could win a significant majority.

What *that* @RedfieldWilton poll could look like in a General Election:

The last general election was in 2019, when Boris Johnson won a landslide victory, the largest since 1987, for the Conservative party. Reported public support for the Conservatives has since fallen in light of the COVID-19 restrictions and economical crisis.

However, as is often left out of media reports, Starmer’s Labour party was advocating for even more stringent COVID restrictions than Johnson enforced.

“The Conservative Party has shown it no longer has a mandate to govern,” he said. “After 12 years of Tory failure, the British people deserve so much better than this revolving door of chaos.”

Starmer referenced the “cost-of-living crisis,” appearing to blame it on the Conservative response to COVID-19.

“Now, they have crashed the economy so badly that people are facing £500 a month extra on their mortgages,” he said. “The damage they have done will take years to fix.”

He was echoed by Sir Ed Davey, the leader of the Liberal Democrats.

“We do not need another Conservative Prime Minister lurching from crisis to crisis,” he said. “We need a general election, we need the Conservatives out of power, and we need real change.”

But David Kurten, leader of the pro-life Heritage Party, warned that the current situation represented a “coup” by “globalists” linked to the World Economic Forum.

TRUSS RESIGNS. New leadership contest within a week to install NWO puppet.
Act now to save our nation. pic.twitter.com/JUilnNT2O0

Former Brexit Party leader Nigel Farage was also wary about the prospects of an election.

The replacement will be a stich up by Tory MPs.

The party is now Labour-lite and serves no purpose.

Former Prime Ministerial candidate Rishi Sunak is rumored to be in the running to replace Truss, while World Economic Forum linked Chancellor of the Exchequer – Jeremy Hunt, appointed only days ago – has reportedly ruled himself out of the leadership contest.