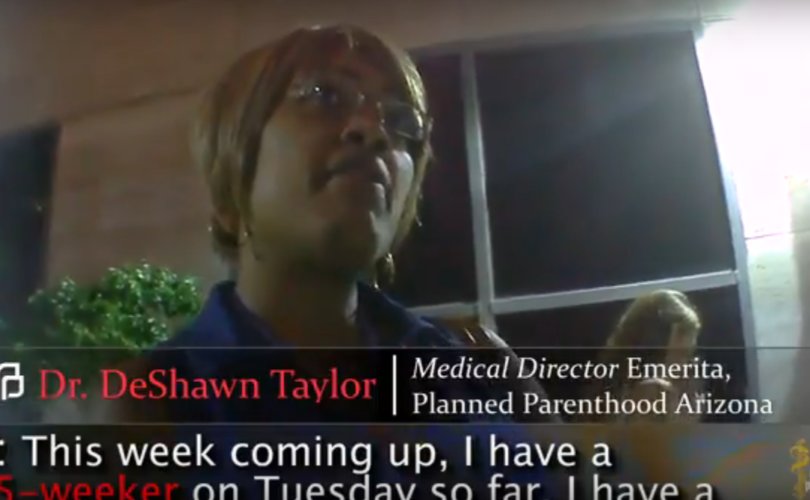 LOS ANGELES, California, March 29, 2017 (LifeSiteNews) – A new undercover video from the Center for Medical Progress (CMP) released this morning shows a Planned Parenthood abortionist graphically describing how to deliver aborted babies intact so that their body parts can be harvested, saying she needs to “hit the gym” before committing some abortions, and explaining she pays “attention to who's in the room” if an aborted baby shows signs of life.

The video comes the day after CMP head David Daleiden and his co-investigator Sandra Merritt were charged with 15 felonies in California for secretly recording their conversations with abortion executives.

“It’s not a matter of how I feel about it coming out intact, but I gotta worry about my staff and people’s feelings about it coming out looking like a baby,” Taylor said of the elective abortions she does up to 24 weeks. “We have the people who do our paperwork for the fetal death certificates, they email us calling them 'babies.' Baby this, baby that, baby so-and-so, and I’m like, that’s creepy!”

“In Arizona, if the fetus comes out with any signs of life, we’re supposed to transport it,” she explained. “To the hospital.”

One CMP investigator responded by asking if there's “any standard procedure for verifying signs of of life.”

Taylor replied, “Well, the thing is, I mean the key is, you need to pay attention to who’s in the room, right?”

“This footage shows a longtime Planned Parenthood abortion doctor willing to sell baby parts for profit, use criminal abortion methods to get more intact body parts, and even cover up infanticide,” said Daleiden. “This footage is just a preview of the damning and incriminating admissions of Planned Parenthood leaders on our further unreleased tapes, being censored by an unconstitutional gag order from a federal judge in San Francisco.”

It “takes more force” to dismember a baby that has not first been killed by a digoxin injection, Taylor told the CMP investigators. “My biceps appreciate” when the heart-stopping drug works, she said.

“I remember when I was a [Family Planning] Fellow and I was training, I was like, 'Oh, I have to hit the gym for this,'” Taylor said of the force she feels in her biceps when committing a dismemberment abortion with forceps.

Daleiden said the only difference between the way Planned Parenthood commits abortions and the way convicted murderer Dr. Kermit Gosnell did abortions is “Gosnell was not so careful as to ‘pay attention to who’s in the room.’”

“Elected officials must stop forcing taxpayers to subsidize Planned Parenthood’s criminal abortion business, and the Department of Justice must immediately open a full investigation and prosecute Planned Parenthood to the fullest extent of the law,” said Daleiden.

“For the abortion giant to continue receiving more than $500 million in taxpayer funding is simply unconscionable,” said Marjorie Dannenfelser, President of the Susan B. Anthony List. “Legislators must act immediately to redirect those funds to community health centers, which outnumber Planned Parenthood facilities by more than 20 to one nationwide and offer a full range of primary health care. As Speaker Ryan said yesterday, the best way to accomplish this is through reconciliation. We urge Republicans to unite and get this done before Members leave town for their spring break.”

The Congressional “spring break” begins April 11. Speaker of the House Rep. Paul Ryan, R-WI, said he wants Planned Parenthood to be defunded via a budget reconciliation bill. The American Healthcare Act bill would have defunded the abortion business, but it was pulled from the U.S. House floor for lack of votes.

Kristan Hawkins, President of Students for Life of America, said the new video is a “wake-up call” for Congress.

“Should they not do everything in their power to defund an organization who would even consider breaking the law by refusing medical attention to a child born alive after a botched abortion depending on who is the room during an abortion?” she asked. “And what about the mother – was she ever told that there is a possibility of her child being born alive and made to suffer without comfort or acknowledgement of their humanity?”

“There is no amount of good that Planned Parenthood can do that would ever suffice for taking the lives of innocent babies, betraying their patients – mothers, sisters, wives, girlfriends, and skirting the law by whatever means possible in order to make more money,” said Hawkins. She called on Attorney General Jeff Sessions to “immediately pursue the criminal charges recommended to him by Congress against Planned Parenthood and their business partners.”