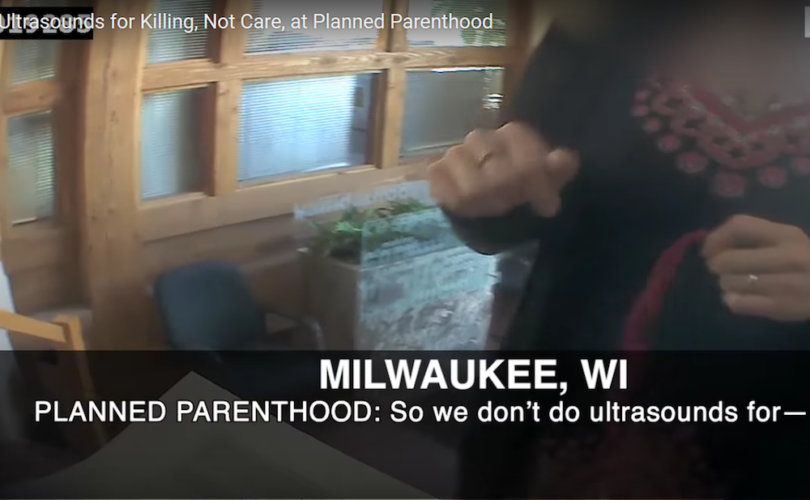 January 31, 2017 (LifeSiteNews) – Two new investigative videos from Live Action show Planned Parenthood uses its ultrasound technology for abortions, but not for women who want to continue their pregnancies and check the health of their babies.

Only three of the 68 Planned Parenthood centers visited by Live Action investigators were able to provide women with an ultrasound for a purpose other than abortion. This is because, in its employees' own words, Planned Parenthood only does ultrasounds “not related to prenatal care.”

“We only do ultrasounds if you are terminating,” according to a Planned Parenthood employee in Corning, New York.

The Planned Parenthood in Council Bluffs, Iowa, told a Live Action investigator that its ultrasounds are “not for any other reason” than abortion.

“We can’t do anything to make sure that the pregnancy’s fine,” a Planned Parenthood staffer in St. Louis, Missouri, says in the video, explaining that the only reason Planned Parenthood would perform an ultrasound for the woman would be if she wanted to abort her baby.

“One would think a corporation that constantly touts its care for women, uses ‘parenthood’ in its name, and has ultrasound machines would want to ensure healthy pregnancies by allowing women to access ultrasounds to monitor the development of their babies,” said Lila Rose, president and founder of Live Action. “But showing a woman an ultrasound image would reveal the beating heart as well as moving arms and kicking legs, destroying the ‘clump of cells’ myth Planned Parenthood perpetuates to try to make abortion easier to accept.”

A Planned Parenthood employee in Farmington, New Mexico, accidentally affirmed the humaity of the pre-born child by acknowledging that it has a gender and is supposed to be “healthy” if not being aborted.

“We won't be able to tell you if it's healthy or the gender,” she said. “We specialize in abortions. You know – that's what our ultrasounds are for, to see how far along the, um, patient is.”

The Planned Parenthood in St. Paul, Minnesota, had a similar response to a woman seeking an ultrasound: “We don't do them by themselves. We do them when … performing abortion procedures.”

“There's nothing that we can do to help you here,” a Planned Parenthood staffer in Albuquerque,  New Mexico, said to an investigator looking for an ultrasound unrelated to an abortion.

Thayer recalled how when the Planned Parenthood in Storm Lake, Iowa, where she worked received a state-of-the-art 4D ultrasound machine, the technician showed her how to use it but paused when he came to the “print” button.

Treviño told Rose that when women came to her Planned Parenthood with problems like polycystic ovary syndrome or fibroids, they were unable to diagnose them because they had no ultrasound machine “other than the ultrasound that is available at the abortion facilities.”

These two videos are the second part of Live Action's “Abortion Corporation” series, which shows Planned Parenthood’s own employees saying its focus is providing abortions, not women’s healthcare. Live Action is spending $500,000 to spread these videos to the public via a digital ad campaign.

Planned Parenthood touts itself as a women's healthcare provider and receives more than half a billion dollars from the government annually.