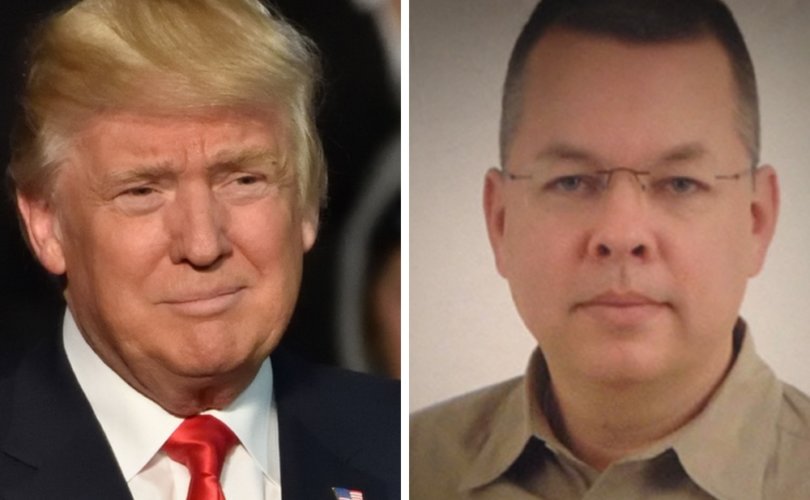 KIRIKLAR, Turkey, July 25, 2018, (LifeSiteNews) – After spending 21 months in a Turkish prison because of his Christian faith, American Pastor Andrew Brunson has been released and allowed to return to his home in Turkey where he will be under house arrest.

According to the American Center for Law and Justice (ACLJ) which has been representing the North Carolina pastor, Brunson had been on trial for the crime of “Christianization.”

ACLJ chief counsel Jay Sekulow said there have been “bilateral negotiations at the highest levels, including the President of the United States who I was on the phone with yesterday evening and this morning.”

President Trump “has been a key leader on this,” he added.

Trump tweeted last week that it was a “total disgrace” for Turkey to keep the pastor imprisoned.

A total disgrace that Turkey will not release a respected U.S. Pastor, Andrew Brunson, from prison. He has been held hostage far too long. @RT_Erdogan should do something to free this wonderful Christian husband & father. He has done nothing wrong, and his family needs him!

There are still legal hurdles to be cleared before Pastor Brunson will be allowed to leave Turkey.

“The urgency on this is to continue praying for [Brunson],” continued Sekulow.  “But he is out of jail.  He is home.  And the next step is to get him home in the United States.”

A just-issued a statement, ACLJ reports the good news:

We have confirmed that the Turkish government has issued an order releasing Pastor Andrew from prison and allowing him to be returned to his home in Turkey. This is a critical first step that we believe will result in the freedom of Pastor Andrew so he can return to the United States and be reunited with his family.

Brunson was jailed in October 2016 after being scooped up in a crackdown of Turkish President Erdogan’s political opponents in the wake of an attempted coup.

As reported last week by LifeSiteNews, the pastor lost 50 pounds during his time in jail and is now taking antidepressants.

Brunson was initially charged with membership in an armed terrorist organization. A Turkish judge had reportedly tried to link the Christian pastor to the political movement launched by Muslim Muhammed Fethullah Gülen, thought to be responsible for the attempted coup. The indictment also claimed Brunson helped members of the Kurdish Workers’ Party, which the Turkish government regards as a terrorist organization, escape by letting them become Christians and leave the country.

“Let it be clear, I am in prison, not for anything that I have done wrong, but because of who I am – a Christian pastor,” said Brunson while in confinement.  “I desperately miss my wife and children. Yet, I believe this to be true – it is an honor to suffer for Jesus Christ as many have before me. My deepest thanks to all those around the world who are standing with me and praying for me.”