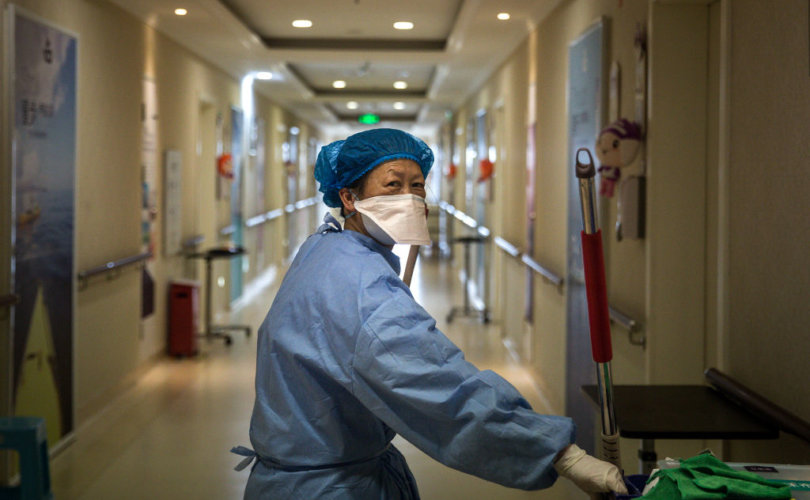 A cleaner wears a mask as she works at a hospital on March 12, 2020 in Wuhan, Hubei, China. Getty Images

UNITED STATES, April 1, 2020 (LifeSiteNews) — Three unnamed U.S. officials say that an intelligence community classified report to the White House concludes that the Chinese government has under-reported the country’s total number of coronavirus cases and deaths, according to a report in Bloomberg.

“The officials asked not to be identified because the report is secret and declined to detail its contents,” the report explains. “But the thrust, they said, is that China’s public reporting on cases and deaths is intentionally incomplete. Two of the officials said the report concludes that China’s numbers are fake.”

The report notes that during Tuesday’s press conference Dr. Deborah Birx, the top response coordinator for the White House’s coronavirus task force, stated that Chinese data had caused some to underestimate the seriousness of the virus.

“The medical community made — interpreted the Chinese data as: This was serious, but smaller than anyone expected,” she said. “Because I think probably we were missing a significant amount of the data, now that what we see happened to Italy and see what happened to Spain.”

Last week a resolution introduced in the U.S House of Representatives condemned the Chinese Communist government for its mishandling of and misinformation about the coronavirus outbreak which has led to a worldwide pandemic and threatens to topple the economies of many nations.

“Ask yourselves what is the likelihood that China has actually reduced the number of new cases to zero, as it claims?” Mosher wrote.

“That in the entire 1.3 billion people of China there is not a single new case?  I would say that the likelihood of this happening is about the same as the CCP discovering a cure for cancer, establishing a base on Mars, and inventing faster-than-light interstellar travel—all on the same day,” he said.

While in February, China saw a rapid increase in the number of new cases of the coronavirus, those numbers have reduced dramatically with much of the country reportedly “returning to normal” again. The coronavirus worldometer website states that there have been just 7 new cases in China today and only 5 yesterday.

Earlier this week there were reports of trucks shipping thousands of ash urns to crematoriums in Wuhan, leading to further questions about the reality of China’s coronavirus death toll.

Mosher told LifeSite today that he suspects the actual figures are 20 times the numbers reported by the government authorities.

“According to official Chinese government data, 50,006 people were infected with the COVID-19 virus in Wuhan with 2,535 dying from the disease. I think the actual figures are probably 20 times that, judging from how busy the crematoria were, and how many thousands of funeral urns are being handed out now to grieving families by each one of Wuhan's eight crematoria every day,” he said.

Mosher said in previous comments that the explanation for the sudden drop in new cases in China is that the Chinese Communist leadership “simply directed doctors across China to stop diagnosing and reporting new cases of the disease.”

“Who needs medicine, when you can just “cure” disease by fiat?” he asked.

Mosher says that the Chinese government “has worked hard over the past few weeks to create the narrative that it was quickly getting the epidemic under control”  and points to evidence that “some local jurisdictions have been deliberately underreporting the number of patients who test positive for the virus.”

“Whether this is being done in response to a national directive, or simply to conform to the official narrative is not clear, but the result has been falling numbers of infected,” he said.