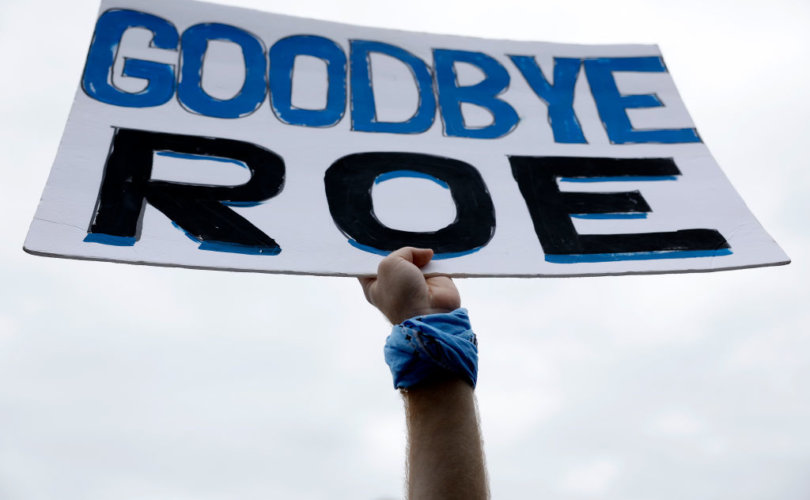 A pro-life activist holds a sign outside of the U.S. Supreme Court Building on June 21, 2022 in Washington, DC.Photo by Anna Moneymaker/Getty Images

Justice Samuel Alito delivered the opinion of the Court, which was joined by Justices Clarence Thomas, Neil Gorsuch, Brett Kavanaugh, and Amy Coney Barrett. The ruling declares Roe “egregiously wrong from the start.”

“Its reasoning was exceptionally weak, and the decision has had damaging consequences,” Alito wrote. “The Constitution makes no reference to abortion, and no such right is implicitly protected by any constitutional provision.”

Chief Justice John Roberts wrote in a separate opinion concurring in the judgement that he supported leaving the Mississippi ban in place but would not have overturned Roe. The Court’s three Democratic appointees filed a joint dissent.

The long-awaited ruling was teased in early May when Politico published a leaked draft of Alito’s opinion, which sent shockwaves across the political spectrum, with pro-lifers tentatively rejoicing, pro-abortion politicians and activists lashing out in anger, many speculating that the leak may have been intended to pressure judges to flip their votes (or to incite hatred and threats against them), and all parties wondering if it was the final decision or subject to change.

That the final decision to overturn Roe held firm despite months of left-wing pressure and violence reflects a majority of the justices’ commitment to the principle articulated in May by Justice Thomas, that “we can’t be an institution that can be bullied into giving you just the outcomes you want.”

The ruling holds massive ramifications, both immediate and long-term. More than 20 states currently have laws on the books that would effectively ban abortion within their borders upon Roe’s fall, from pre-Roe abortion bans that went unenforced to “trigger laws” designed not to take effect until a ruling like today’s. In those states, abortion will now be illegal.

Another 15 states plus the District of Columbia have laws on the books legally protecting abortion, three of which explicitly codify the practice as a “right.” For now, abortion will remain legal in those jurisdictions, as well as the remaining states that have not spelled out abortion’s status one way or another, but without Roe state residents now have the power to vote on the issue for themselves, or lobby their elected representatives to change the law in either direction. Pro-lifers in Congress can now pursue a nationwide abortion ban, as well.

Therein lies one of the decision’s biggest long-term ramifications: a newfound sense of urgency for pro-life efforts. Now that abortion policy can be directly decided through the elected branches of government, and politicians can no longer invoke the judiciary as an excuse for inaction, abortion-related legislative and lobbying efforts are certain to increase dramatically across the country, with the issue prioritized even higher by activists and voters alike.

Additionally, the pro-life victory is, for conservatives, the most welcome result yet from former President Donald Trump’s nominees to the Supreme Court, and is all-but guaranteed to become one of his supporters’ most potent talking points should he make another run for the White House in 2024.