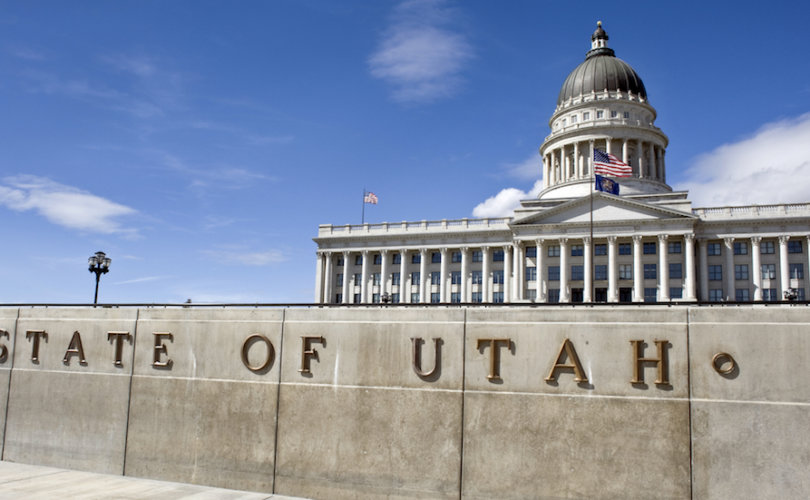 The Utah state House approved an override of the governor’s veto in a 56–18 vote on Friday afternoon with the backing of all but two Republicans.

BREAKING: The Utah legislature has OVERRIDEN the veto of Gov. Spencer Cox on legislation to ban biological men from playing girl's sports.

Utah has become the 12th state to protect the integrity of athletic competition for our daughters.

The state Senate followed minutes later with a 21-8 vote. Two Republicans again joined Democrats in opposition. No Democrats in either chamber supported the override.

Utah’s sports bill, known as HB 11, requires public and some private K-12 schools to classify sports based on biological sex. Males “may not compete” on teams for girls, according to the bill, which takes effect July 1.

Utah Republican lawmakers, at the urging of Gov. Cox, initially spent weeks negotiating with Democrats and LGBT activists on a compromise bill that would have allowed males to compete on female teams with the approval of a state-appointed commission.

But on the final day of the legislative session last week, the state legislature passed HB 11 after amending it to include a strict ban on biological males in girls’ sports. Provisions that would create a commission to determine whether gender-confused boys can compete against females will come into effect if the amended sections are struck down.

Cox, who has a long record of supporting the LGBT agenda, immediately vowed to veto the revised bill. He claimed that it would “likely bankrupt” the Utah High School Athletic Association and cost “millions of dollars in legal fees for local school districts with no state protection.”

Out of 11 similar sports bills signed by Republican governors across the U.S. in recent years, just two have been blocked in court. The NCAA also has yet to pull any games from states that have enacted the legislation, despite having threatened to do so.

The final version of HB 11 passed last week with smaller majorities than on Friday. Supporters said that they managed to persuade several Republicans to back the override in recent days, AP News reported earlier this week.

In his veto letter on Tuesday, Cox said that if the legislature overrode his veto, he would “immediately call a special session” to change the bill’s ban on gender-confused males “in order to avoid bankrupting our athletic association and local schools.”

“A simple veto override will not resolve this fundamental issue,” he said.

Cox has repeatedly denounced conservative, pro-family legislation under consideration by the Utah legislature and proclaimed the first statewide LGBT “pride” week in Utah last year. As the state’s lieutenant governor, he shed tears while decrying the failure of a proposal to prohibit “conversion therapy,” and until recently listed his gender pronouns on his Instagram account.

A first-term governor, Cox is up for re-election in 2024.

In Indiana, Republican Gov. Eric Holcomb this week also rejected a bill that would protect girls’ sports, though legislative leaders have said that they plan to override his veto.