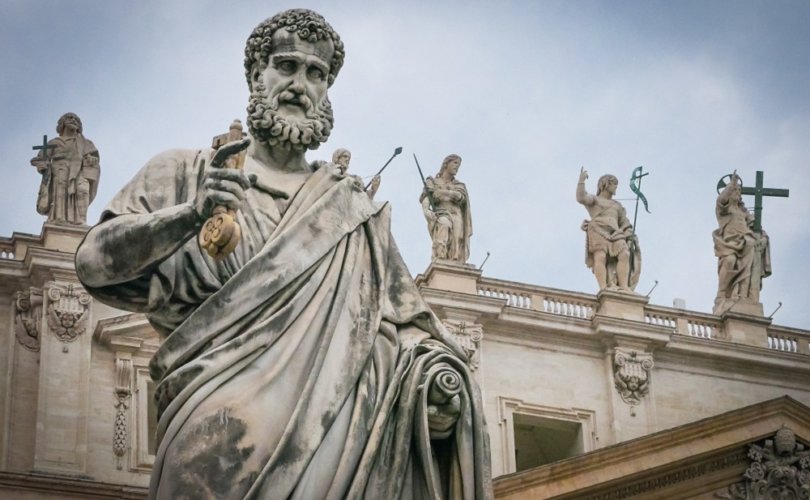 A question to the Congregation for the Doctrine of the Faith about whether or not the Church has the “power to give the blessing to unions of persons of the same sex” was answered in the “negative” by the congregation’s prefect, Luis Cardinal Ladaria Ferrer. The congregation’s statement was assented to by Pope Francis. While the statement was signed Feb. 22, it was only released today.

Blessings for homosexual couples has been especially pushed by Catholic Church leaders in Germany, such as Cardinal Reinhard Marx and other bishops who are part of the country’s “Synodal Path,” and have called for a blessing of such relationships liturgically.

The Congregation explained in today’s statement that blessings “belong to the category of the sacramentals, whereby the Church ‘calls us to praise God, encourages us to implore his protection, and exhorts us to seek his mercy by our holiness of life.’”

It pointed out that in order to receive a blessing, one must “be objectively and positively ordered to receive and express grace, according to the designs of God inscribed in creation, and fully revealed by Christ the Lord.”

“This is because they would constitute a certain imitation or analogue of the nuptial blessing invoked on the man and woman united in the sacrament of Matrimony, while in fact ‘there are absolutely no grounds for considering homosexual unions to be in any way similar or even remotely analogous to God’s plan for marriage and family.’”

“The declaration of the unlawfulness of blessings of unions between persons of the same sex is not therefore, and is not intended to be, a form of unjust discrimination, but rather a reminder of the truth of the liturgical rite and of the very nature of the sacramentals, as the Church understands them,” the Congregation added.

The Congregation made it clear that persons who struggle with same-sex attraction may receive a blessing should they “manifest the will to live in fidelity to the revealed plans of God as proposed by Church teaching.”

The German bishops’ conference reacted to the Congregation’s statement with muted disappointment, calling the teaching a “viewpoint.”

“In Germany and in other parts of the universal Church there have been discussions for a long time as to how this doctrine and doctrinal development can generally be advanced with sound arguments — on the basis of fundamental truths of faith and morality, ongoing theological reflection, and also in openness to newer findings of the human sciences and the life situations of today's people. There are no easy answers to questions like this,” the conference stated.

“The Synodal Path, which the German Bishops’ Conference and the Central Committee of German Catholics have initiated, therefore endeavors to discuss the topic of successful relationships in a comprehensive way that also takes into account the necessity and the limits of the Church's doctrinal development. The viewpoints put forward by the Congregation for the Doctrine of the Faith today must and will, of course, find their way into these discussions.”

Gerhard Cardinal Müller, former prefect of the Congregation for the Doctrine of the Faith, commented on the situation of blessings for homosexual couples, saying, “On the morning of creation, God blessed the first marriage as the union of a man and a woman. A union of whatever kind, which is contrary to God's Will, cannot at the same time be declared to be approved by God.”

“For to bless, benedicere, means to declare something to be good and to become good in God's view and towards God,” he commented. “However, no other forms of living together can be blessed by the Church — if she remains loyal to her Divine Founder — except marriage and consecrated life; individuals, on the other hand, can all be blessed,” he said.

“This does not only refer to the partnership of people with sexual inclinations to persons of their own sex. Also the partnership of a man and several women or of a woman and several men cannot be blessed by the Church. Even normal friendships are not formally blessed. Marriage between a man and a woman is part of the essential characteristic of the Church, since it is the fertile nucleus of the Christian family. It was instituted as a Sacrament by Jesus Christ and is inseparable from the community of believers. It is only with Jesus that, in the face of many an obscuration (caused by Original Sin) of marriage, God's original Will for monogamy, indissolubility, openness to the child and sacramentality has once again become fully apparent,” he added.