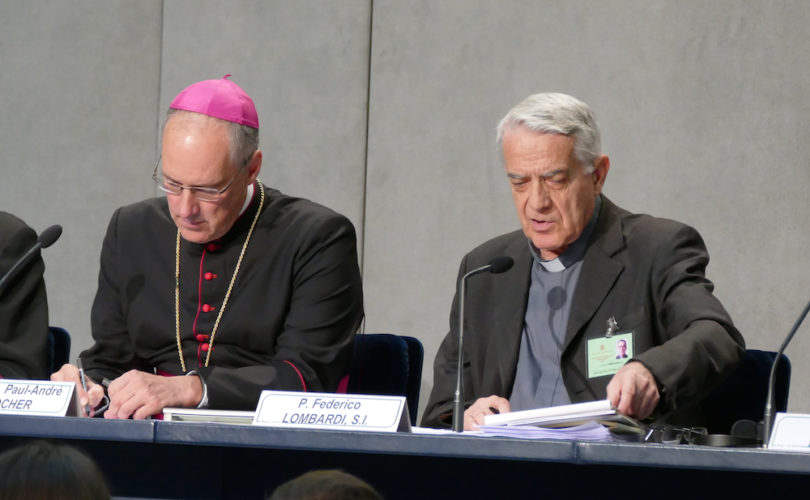 URGENT: Sign the pledge to pray for the Synod fathers and the outcome of the Synod on the Family here.

ROME, October 12, 2015 (LifeSiteNews) – Amid continuing concern about the Vatican press office’s “manipulation” of the family synod’s message, a priest who has been covering Vatican news for over 15 years had his credentials revoked last week, and was told to leave the premises “immediately.” The revocation came after he had challenged an archbishop following the October 6 press conference over comments claiming that allowing Communion for the divorced and remarried is up for debate.

Archbishop Paul-Andre Durocher made the comments in response to a reporter’s question about whether the matter pertained to Church discipline – which could potentially change – or doctrine, which is fixed.

“To be quite honest, there might be differences of opinion on that,” Durocher said. “Let’s be honest. Is that a question of doctrine or is that a question of discipline? I think that’s probably going to be one of the questions that will be debated in the small groups.”

“If you want doctrine, go read Denzinger,” he added.

As Archbishop Durocher walked back after the press briefing, Father Nicholas Gregoris approached him and questioned him on the remarks.

“I told him that I think it was very dangerous to say the Church can change her teaching on the divorced and Communion,” Father Gregoris told LifeSiteNews. In particular, the priest told Archbishop Durocher that “conciliarism is a heresy,” referring to the idea that Church councils can establish doctrine independently of the pope.

Father Gregoris noted that he was “agitated” by the archbishop’s remarks, but argued that “speaking passionately” is not a crime.

Father Gregoris and others present indicate that Archbishop Durocher said little in response, and then walked away.

“[He said] nothing substantive in response to my critiques,” the priest said. “He just basically ignored me, turned his back on me.”

“As a bishop, as one who is part of the Magisterium, he did the Magisterium no service by what he did,” he said. “It’s embarrassing, and it’s ridiculous. We should be able to hear the truth from our bishops.”

“They gave me no explanation,” he said. “[Press spokesman] Fr. Lombardi didn’t say anything to me. It was just two of his representatives.” He said it was “embarrassing,” especially given that he was wearing a Roman collar, and that it happened in front of colleagues.

Father Gregoris is in Rome as a freelancer, reporting for Catholic World Report, Ireland’s Catholic Voice, and The Catholic Response, and has written previously for numerous media including L’Osservatore Romano, the Vatican’s own newspaper.

He says he has visited Rome since his youth, and has a doctorate in theology from a pontifical college in Rome. He was ordained a priest in 1997 and began covering Vatican events in 1999. At last year’s Extraordinary Synod on the Family, he wrote for Catholic News Service.

On Tuesday, Father Gregoris published an article in Catholic World Report expressing concern over an intervention Pope Francis made in the Synod hall that he believed undermined Cardinal Peter Erdo’s strong report opening the Synod on Monday. Towards the end of the article he criticized Archbishop Durocher’s comments on Communion for the divorced and remarried.

“I don’t think the Vatican should act like the Gestapo, the politburo,” he added. “They’ve made a mountain out of a mole hill – they’ve made it worse.”

Father Gregoris also noted that several journalists had approached him after the incident and “thanked me for having the courage to say what I said.”

LifeSiteNews has learned that another reporter for an orthodox U.S. Catholic magazine was denied accreditation after Father Gregoris lost his credentials.