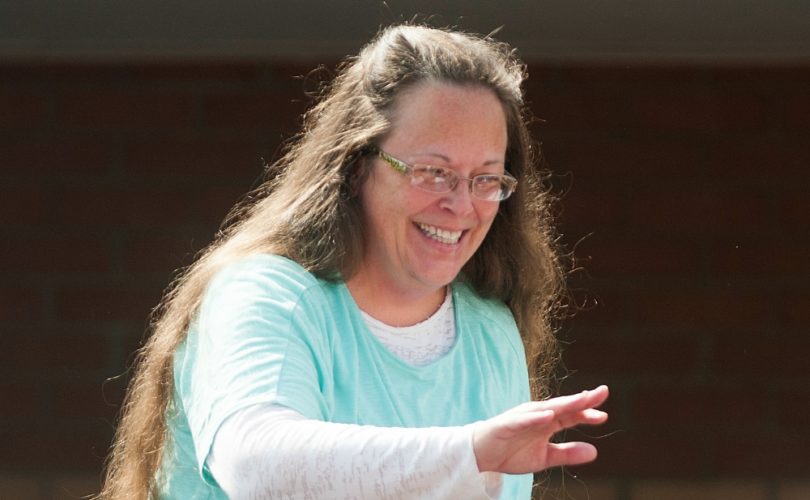 Oct. 2, 2015 (LifeSiteNews) – In an official statement this morning, Fr. Federico Lombardi, head of the Vatican press office downplayed Pope Francis’ meeting with Kim Davis. Meanwhile, English-language attaché of the Vatican press office, Fr. Thomas Rosica, described what he labeled the “negative impact” of the pope's meeting with Davis and suggested that the pope may not have been properly briefed before the meeting.

“Pope Francis met with several dozen persons who had been invited by the Nunciature to greet him as he prepared to leave Washington for New York City,” said Lombardi. “Such brief greetings occur on all papal visits and are due to the Pope’s characteristic kindness and availability.”

“The only real audience granted by the Pope at the Nunciature was with one of his former students and his family,” Fr. Lombardi added.

The Vatican explained that the “brief” meeting between the Pope and Davis has “continued to provoke comments and discussion” and thus offered his explanation “in order to contribute to an objective understanding of what transpired.”

Fr. Lombardi said, “The Pope did not enter into the details of the situation of Mrs. Davis and his meeting with her should not be considered a form of support of her position in all of its particular and complex aspects.”

News that the pope had secretly met with Davis during his trip to the U.S. broke on Tuesday evening, after her lawyer made the meeting public. Davis said that Francis had told her to “stay strong,” giving both her and her husband a rosary. “Please pray for me,” he requested.

Initially the Vatican refused to confirm that the meeting took place. However, after allegations began circulating that Davis was lying about the meeting, Fr. Lombardi subsequently issued a follow-up statement saying the Vatican did “not deny” that the pope met with Davis, adding “I have no other comments to add.”

The meeting has sparked furious discussion in the media, as Kim Davis has become a lightning rod in the debate over same-sex “marriage” and conscientious objection in the U.S.

On the plane ride home from the U.S. Pope Francis was asked about the Kim Davis case. He had responded, “Conscientious objection must enter into every juridical structure because it is a right.”

However, gay activists expressed dismay at the news of the personal meeting with Davis, saying that it undermined the pope's reputation as being accepting of homosexual people.

“When I saw this news, my heart sank,” opined Slate’s Vanessa Vitiello Urquhart of the pope’s meeting with Davis. “In one 15-minute meeting, the pope undermined the unifying, healing message that many queer people and our supporters were so eager to have him bring.”

“That simple encounter completely undermines all the goodwill the pope created in downplaying ‘the gay issue’ on his U.S. trip,” Huffington Post’s Michelangelo Signorile wrote. “The pope played us for fools, trying to have it both ways.”

“He's an artful politician,” he continued, “telling different audiences what they want to hear on homosexuality.”

In a new statement today, Davis' lawyer, Mat Staver, Founder and Chairman of Liberty Counsel, disputed reports circulating in light of the Vatican's newest statement suggesting that Davis had simply met the pope as one in a line of people.

Staver acknowledged that the pope “was not weighing in on particular facts of a legal case,” but added that “his statements about religious freedom and his encouragement to Kim Davis to ‘stray strong’ during a private meeting reaffirm the human right to conscientious objection. This is a right for everyone.”

Sean Michael Winters of the liberal National Catholic Reporter had promoted this interpretation of the meeting, writing on his blog that “the pope was ill served by whoever arranged this meeting.”

However, at Breitbart, Austin Ruse cited unnamed sources saying that the meeting between Davis and the pope came at the invitation of a high-ranking official in the Vatican’s Secretariat of State, acting on behalf of the pope himself.

However, Fr. Rosica placed the responsibility for the meeting in the hands of U.S. papal nuncio Archbishop Carlo Maria Viganò.

“Who brought her in? The nuncio,” Father Rosica told the New York Times, saying that such meetings “depend on the host of each place.” “The Nunciature was able to bring in donors, benefactors.”

Fr. Rosica added: ““I would simply say: Her case is a very complex case. It’s got all kinds of intricacies. Was there an opportunity to brief the pope on this beforehand? I don’t think so. A list is given — these are the people you are going to meet.”

Rosica responded to a question about whether the Vatican press office had been unaware of the pope's meeting with Davis, saying: “No, but I think we may not have been aware of the full impact of the meeting. It is very difficult sometimes when you are looking at things in America from here.”

Pope’s meeting with Kim Davis may have been his most important. Why the secrecy?