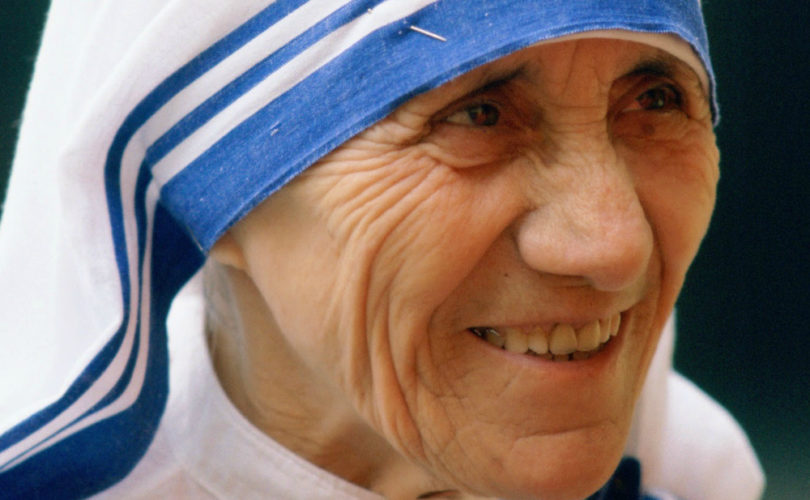 Update: The Holy See Press Office said this morning that Mother Teresa’s cause for sainthood has not yet concluded and therefore no date for her canonization has been officially set, according to Catholic News Agency. Despite this, the vice director at the Holy See Press Office, Fr. Ciro Benedettini, confirmed that there is a “project, a study being carried out” on Blessed Mother Teresa’s potential future canonization.

Mother Teresa's work helping the “poorest of the poor” in the slums of Calcutta as well as spreading her work with the poor around the world through the Missionaries of Charity — which she founded in 1950 — was recognized with a Nobel Peace Prize in 1979. She died in 1997 at the age of 87 and was beatified by Pope St. John Paul II on October 19, 2003.

Her statements condemning abortion while courageously supporting the poor, helpless, and voiceless are part of the lexicon of all pro-life work around the world.

Mother Teresa once said: “Any country that accepts abortion is not teaching its people to love, but to use any violence to get what they want.”

In her Nobel Prize acceptance speech in 1979 in Norway, she famously stated, “I feel the greatest destroyer of peace today is abortion, because it is a direct war against the child, a direct killing of the innocent child – direct murder by the mother herself… Because if a mother can kill her own child – what is left for me to kill you and you kill me – there is nothing between.”

In a 1985 interview with New York journalist she reiterated and expanded on this point, explaining that the unborn child is created “in the image of God for greater things, to love and be loved.”

“That is why it is such a terrible thing to think that the mother, to whom the child has been given as a gift of God, could destroy it.”

She made the same point in February 1994, at a National Prayer Breakfast attended by pro-abortion President Bill Clinton and first lady Hillary Clinton.

Abortion “is really a war against the child, a direct killing of the innocent child, murder by the mother herself,” she said.

“If we accept that a mother can kill even her own child, how can we tell other people not to kill one another?” she said. “Any country that accepts abortion is not teaching its people to love one another, but to use any violence to get what they want. This is why the greatest destroyer of love and peace is abortion.”

For a Catholic to be declared a saint of the Church, a miracle attributed to their intercession must take place and be examined and recognized by the Church. A miracle attributed to Mother Teresa’s intercession has been approved by Vatican experts and will be examined by cardinals and bishops from the Congregation of the Causes of Saints next month, Vatican Insider reports. It is the pope, however, who ultimately approves the miracle and announces the official date of the canonization ceremony.