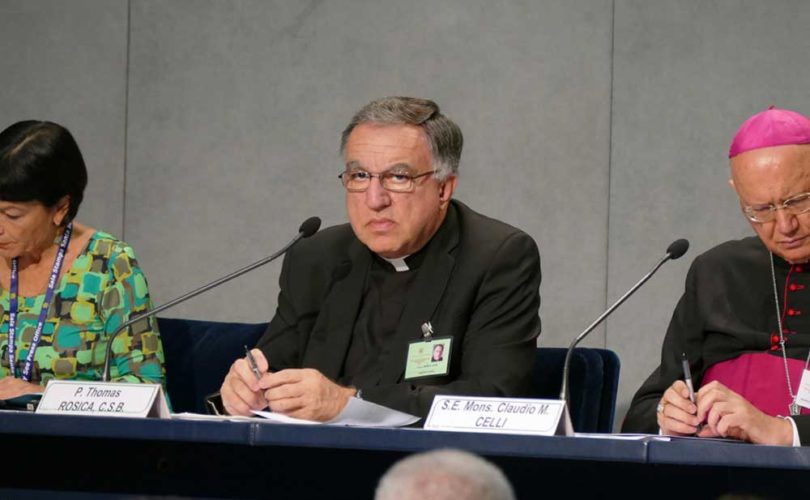 Update: Patrick Reilly, president of the Cardinal Newman Society, reports on Twitter that Fr. Rosica has also resigned from the boards of St. John Fisher College and the University of St. Thomas in Houston. We are currently confirming.

TORONTO, February 25, 2019 (LifeSiteNews) – A Vatican spokesman who is the CEO of Canada’s Salt + Light Media has stepped down from an important academic post after admitting to plagiarism.

Father Thomas Rosica, CSB, has resigned from the Collegium, one of the governing councils of the University of Saint Michael’s College in Toronto.

In a message released this morning, the Chair of the USMC Collegium wrote on Twitter, “Fr. Thomas Rosica, CSB made significant contributions while serving the St. Michael's community as a member of its Collegium. Over the weekend, I received and have respectfully accepted his resignation from the Collegium.”

Rosica himself retweeted the message, adding, “Thank you @uStMikes & @USMCTheology for the privilege of having served you for many years. You have great leaders with vision. Blessings and peace”.

Thank you @uStMikes & @USMCTheology for the privilege of having served you for many years. You have great leaders with vision. Blessings and peace https://t.co/Btc8DUBzvE

The Basilian priest and the Catholic institutions associated with him have been plunged into scandal as news of Rosica’s misappropriations of the work of others spread. Rosica’s plagiarism has now been traced back as far as 1991.

The Salt + Light Media chief’s habitual plagiarism came to light after Professor John Rist informed LifeSiteNews that the Basilian Father had slandered Vatican whistleblower Archbishop Viganò in a lecture he gave at Cambridge University earlier this month. LSN’s close examination of Fr Rosica’s remarks revealed that he had misappropriated the words of at least five other men.

University ‘troubled to hear’ of plagiarism allegations against board member Fr. Rosica