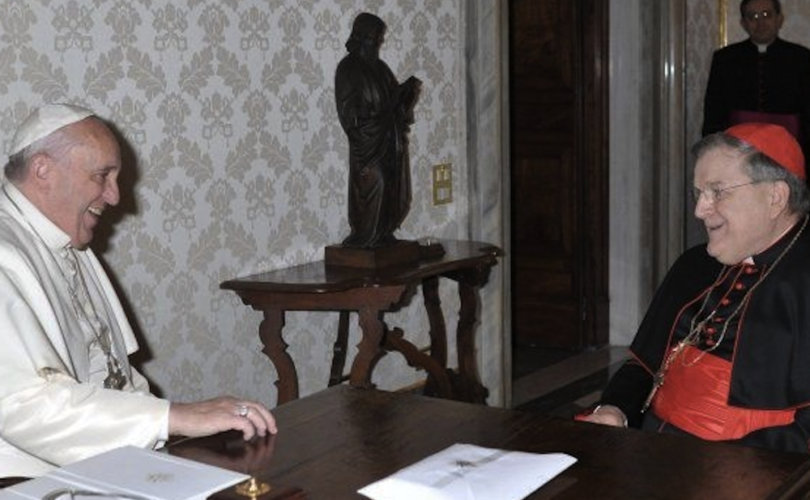 ROME, January 30, 2019 (LifeSiteNews) — In a new document dump, today Wikileaks released a private letter of Pope Francis to US Cardinal Raymond Leo Burke concerning disputes and power struggles within the Sovereign Military Order of Malta, also known as the Knights of Malta.

The dispute … reached fever pitch after Pope Francis forced the abdication of Matthew Festing as Prince and Grand Master of the Order in January 2017. A month earlier Festing had dismissed the Order’s Grand Chancellor Albrecht Freiherr von Boeselager.

The reason for the dismissal is said to be that Boeselager, who served as health minister for the Order, was held personally responsible for having approved funds for an aid mission in Africa that distributed condoms, amongst other things. This directly contravenes Church teachings on contraception and Festing was adamant that Boeselager be held responsible.

Boeselager, however, appealed to Pope Francis, who in turn deeply undermined the Order’s independence and sovereignty by appointing a papal commission to investigate the matter and report back to the Holy See. Boeselager was subsequently reinstated at the same time as Festing was ousted. The papal letter, published by WikiLeaks today, shows the Pope was aware of and involved in the dispute since at least November 2016 when he met with Cardinal Burke.”

Adding yet more intrigue to the tale are rumours that some high-ranking members of the Order have also attended Masonic lodges or other organisations deemed suspect by the Church [5]. Some of this seems to be confirmed by the Pope’s letter, which is dated 1 December 2016 (over a month before Boeselager was reinstated and Festing dismissed).