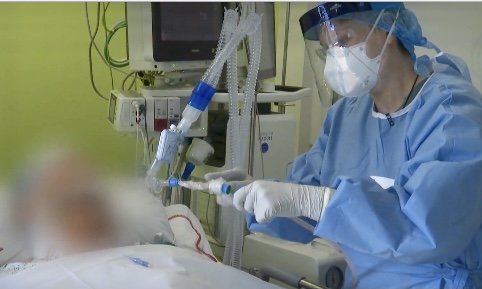 (LifeSiteNews) — As Austria enters into a 10-day period of scapegoating unvaccinated people who have been under a police-controlled lockdown since Monday, increasing evidence points to an uncomfortable reality for the COVID experimental jab promoters: Not only do the  “vaccinated” get the SARS-CoV-2 virus, but they can also be contagious, develop severe forms of COVID-19, and end up in the ICU.

Belgium is a case in point. In a video interview earlier this month, Dr. Kristiaan Deckers, chief medical officer at the Gasthuiezusters’ hospital in Antwerp (GZA), acknowledged that “all” patients in intensive care at the time with COVID were “actually vaccinated.”

After having noted that the number of hospitalizations is on the rise in Belgium, the ATV journalist introduced Deckers’ words calling on “those who believe that intensive care units are now full of unvaccinated patients” to think again.

“Right now, here, we are indeed seeing a large majority of so-called breakthrough infections. That’s different from a few weeks ago when we did have a majority of unvaccinated people in the ICU. At the moment, that is no longer the case. The patients we have in now have in the ICU unit in GZA – I checked yesterday – are actually all vaccinated,” he said.

The journalist added that most of these patients had underlying conditions that made their immune system more vulnerable, and their average age was 55 to 60 years old.

However, the experimental vaccine was supposed to “protect” precisely those people, at least from the most severe forms of COVID-19. And, of course, no one knows who infected them. Under the current sanitary pass system in Belgium, the “vaccinated” need not test against the virus before visiting very vulnerable people and can be contagious.

According to the national Belgian television RTV.be, a similar situation is developing in the Kempen region where the direction of the Turnhout general hospital, Jo Leysen, said more and more COVID patients who end up in hospital are “vaccinated.” “I know that you sometimes hear other rumors, but the large majority of patients we are hospitalizing right now are vaccinated people,” he said. He did note that hospital stays are not as long as before, with faster recovery on average.

Pedro Facon, the “corona commissioner” of the Belgian administration, noted that the statistics “prove that the vaccine gives protection, and even more that it protects against the most serious forms of the illness,” because “74.4 percent” of the population are now fully vaccinated in Belgium and a lesser percentage of the “vaccinated” are currently in hospitals or in an ICU.

However, these numbers give little detail beyond the age and vaccine status of COVID patients. Interestingly, among patients age 65 and over, the infection rate is in fact higher among the fully vaccinated than among the partially vaccinated or unvaccinated: 454/100,000 against 329.9/100,000.

Facon acknowledged that this could be due to the health profile of this segment of the population and because the vaccinated have more contacts with other people without observing security measures.

According to Sciensano, the “vaccine” does protect patients from more severe forms of COVID, which is evident in the number of cases rising rapidly since mid-October. ICU admissions and deaths attributed to COVID are also rising, but much slower. Whether this is due to the fact that the Delta or Indian variant is less severe than the previous versions of the virus is a question that would deserve to be raised but is not because of this is true, the “vaccine” narrative would crumble even further.

In Belgium as in most other European countries, no early treatment is given for COVID.

In other countries, breakthrough infections are also becoming the rule. In Singapore, where some 83 percent of the population are “fully vaccinated,” positive tests have increased spectacularly since mid-August and peaked at the end of October. Simultaneously, the number of full vaccinations doubled between mid-July and the end of August.

The French daily FranceSoir listed a few known COVID clusters in France on November 10. A large hospital in Bordeaux had 15 “positive” health workers, who are under a mandatory vaccine rule since mid-September, and six fully vaccinated COVID patients. Some 40 fully vaccinated health workers and patients tested positive in the local hospital of Puy-en-Velay.

Homes for the elderly also have clusters: 20 residents, all vaccinated, were recently tested positive in the Vendée, as well as four vaccinated employees. In Saint-Calais in northwest France, one-third of the residents, all of them vaccinated, tested positive and five of them died. There was no possibility that the elderly patients could have been infected by people from outside contact with unvaccinated individuals.

Scientific journalist Xavier Bazin, who wrote the FranceSoir article, recalled that people who received the experimental jab have exactly the same viral load as the unvaccinated and are just as contagious.