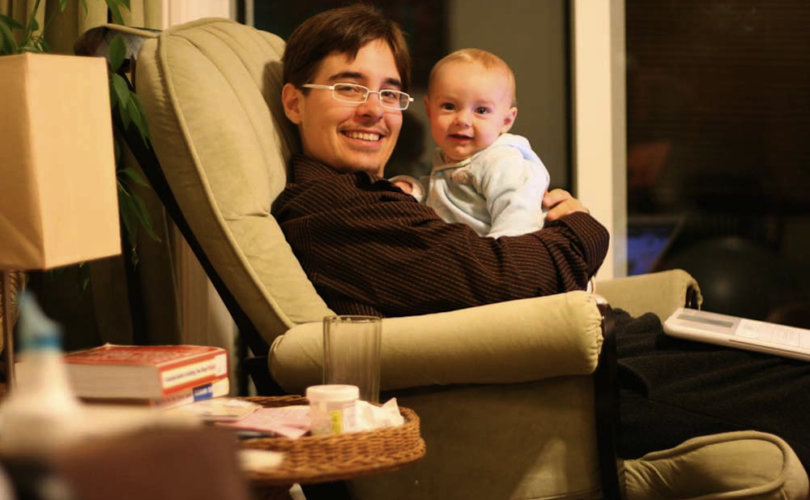 Trevor MacDonald has nursed two children as a transgender individual and is a Le Leche League International leader.The New Family

SCHAUMBURG, Illinois, May 19, 2017 (LifeSiteNews) – A venerable breastfeeding advocacy group is floating the notion that men can nurse children.

Nursing is not just for moms anymore, according to a blog post from the National Catholic Register this week that included a policy statement from La Leche League International (LLLI).

“As the cultural understanding of gender has expanded, it is now recognized that some men are able to breastfeed,” the organization also stated.

LLLI has accommodated the idea of breastfeeding men since 2014 when it changed the policy, because “the cultural understanding of gender has expanded.” Therefore “it is now recognized that some men are able to breastfeed.”

The Illinois-based international organization has provided breastfeeding support for more than 60 years. Three years ago, it began allowing  “men who otherwise meet the prerequisites for becoming a volunteer applicant” to be breastfeeding counselors.

Those prerequisites are organizational experience, personal experience breastfeeding a baby for at least nine months, and a demonstrated commitment to La Leche League philosophy.

That’s no misprint — men with “personal experience breastfeeding a baby for at least nine months” can apply to be a breastfeeding counselor.

“Of course, men can’t breastfeed,” author Glenn Stanton wrote in the post. “But many women who believe they are men … keep their uteruses and breasts, giving birth and nursing their babies like any other women.”

The proposed concept of a breastfeeding man isn’t new. In 2008, Thomas Beatie, a post-surgical female who now uses the name Tracy Lagondino, received national attention with the illusory billing of being a pregnant man.

A breastfeeding counselor would be someone charged with assisting new and struggling mothers in mastering the intimate act of nursing their infant children, Stanton pointed out. And according to LLLI, this could be a man.

It was “in the spirit of nondiscrimination … ” that LLLI changed its policy in 2014. And “as a nondiscriminatory organization,” volunteer breastfeeding counselor positions “cannot be considered ineligible based on factors such as gender, race, religion, physical disability, marital status, sexual orientation, financial or social position, or political or social views.”

There are links to accounts on two websites in the blog post, one to an online TIME magazine column and the other from Milk Junkies: Breastfeeding and parenting from a transgender perspective.

Both detailed stories of women who identify as men but who apparently were able to become pregnant and nurse their children.

The Milk Junkies post, from 2016, included a statement from LLLI that said:

“We recognize that any breastfeeding parent, regardless of whether they self-identify as a mother or father, should be — and is now — welcome to investigate LLL Leadership. There are other prerequisites that a potential Leader needs to satisfy, but being a woman isn't one of them.”

“Can you imagine an anxious mother, struggling with her own self-confidence and changing body, having to learn the ins and outs of such an intimate process from a bearded woman presenting herself as a man?” Stanton asked. “It is an absolute violation of her innate modesty and a ridiculous expectation for her to be totally cool with it.”

Stanton concluded by noting the discrepancy between the breastfeeding organization maintaining the policy of breastfeeding “men” while having a resource in a book titled The Womanly Art of Breastfeeding.

“How can they not appreciate how this makes nursing ‘dads’ feel?” Stanton queried further. “They will have to change the title, declaring breastfeeding as a ‘manly art’ and feature a five o’clock-shadowed individual on their cover. That is, if they really believe their own rhetoric.”