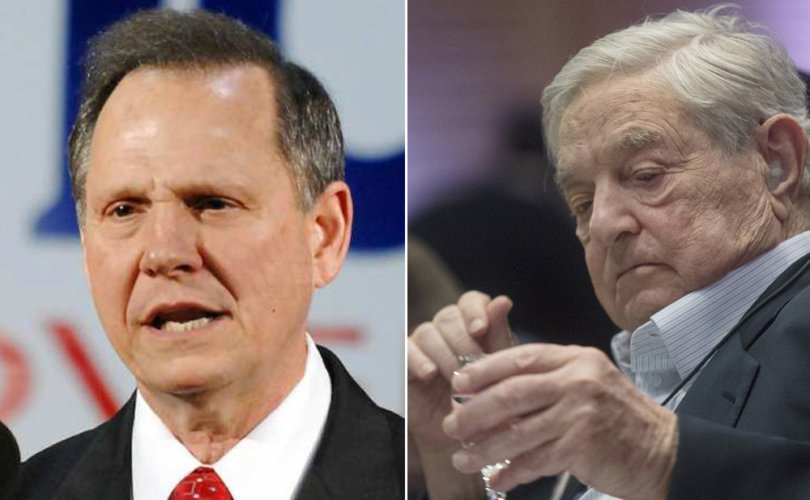 December 7, 2017 (LifeSiteNews) – Breitbart news revealed that Soros-funded organizations have been working for months in Alabama to stop the election of conservative Christian Judge Roy Moore, the pro-life Republican candidate for U.S. Senate.

Breitbart revealed that Jones “is tied to some of the specific organizations associated with the drive to register felons” in Alabama. Among them is the Soros-funded Brennan Center for Justice. Jones also voiced support on his personal website of the Alabama-based Equal Justice Initiative, another Soros-financed group.

Breitbart identified the man spearheading the campaign as Pastor Kenneth Glasgow, who “successfully registered thousands of felons across Alabama in recent weeks.” Glasgow is the president of the Ordinary People Society (TOPS) and former leader of the radical Free Alabama Movement (FAM), which has worked with many radical left organizations, such as the Industrial Workers of the World and the Anarchist Black Cross Federation. He is not alone in his efforts to turn Alabama blue.

His strategy was possible thanks to a new law passed this year by the state legislature. As The Birmingham News reported, the bill “signed by Gov. Kay Ivey in May, cleared the way for thousands of felons to restore their voting rights.” The law does not allow every convicted felon to vote; there is a list of crimes whose commission makes the perpetrator ineligible. The list includes murder, rape, soliciting a minor, and drug trafficking.

The state of Alabama wasn’t required to inform the felons about the legal change, but numerous groups linked to the Democratic Party sued the state to force it to do so.

According to Breitbart, last year the Campaign Legal Center, as well as the American Civil Liberties Union of Alabama (ACLU), both Soros-funded, took legal action to force the state to inform convicted felons that they can vote. Over the last few months, they also have been registering people to vote in their legal clinics.

The ACLU has also worked with Glasgow’s TOPS and organized a Voter Rights Restoration training session in Alabama. Breitbart reported that the ACLU dedicated a special section on its web site to getting supporters to register for the Alabama senate race. The group also used Twitter to promote the voter registration drive in the state.

Other organizations, such as MoveOn.org and the League of Women Voters of Alabama, also have been working to increase voter turnout. Both are heavily funded by Soros’ Open Society.

Glasgow, half-brother of the Rev. Al Sharpton and described by the New York Times as a “onetime criminal,” envisioned a decade ago that if convicts could vote, “There would be a lot of difference in our legislators, our elected officials and our presidents that we’ve had.” He said, “It would definitely change the political spectrum of Alabama.” Glasgow now hopes that people with criminal records “swarming the polls” can give the win to Jones.

The case of Virginia surely gives Glasgow grounds for optimism. In last month’s governor’s race, ex-felons voted after Gov. Terry McAuliffe (D), close friend of the Clintons, had given them back their voting rights.  Democratic candidate Ralph Northam was voted into the governor’s mansion in Richmond, defeating the Republican.

Jones, former U.S. attorney, opposes the repeal of the Affordable Care Act (Obamacare) and is open to a “public option” in healthcare. He supports same sex “marriage”, and opposes an abortion ban after the 20th week of gestation.

Moore is not shy about discussing God, reciting his own pro-life poetry, and quoting the Founding Fathers’ speeches. His defense of Alabama’s natural marriage law cost him his job as Alabama State Supreme Court Chief Justice. After easily winning in the primary, he was accused of improper sexual behavior, charges brought by the Washington Post, which he strongly denies.

Speaking to CNN, Janet Porter, a spokesperson for Moore called them “false accusations” and blamed the media for not investigating them.  She called Moore’s opponents “People who are out to get him because there is a Senate seat in play that has the Supreme Court in the balance.”

Porter added, “Instead of with the lynch mob media, instead of the Democrat liberals, instead of the convicted felons that George Soros is registering to vote, I side with the man who stood for the Ten Commandments, for God, his principles and his impeccable character.”