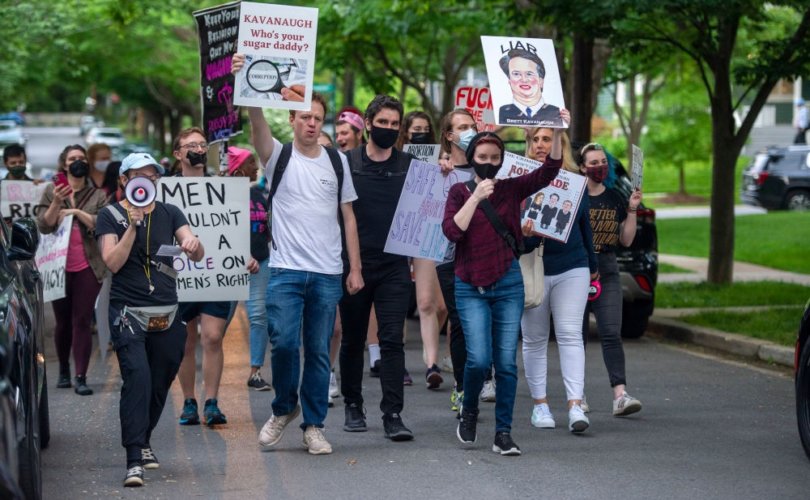 The news comes just weeks after Kavanaugh was the subject of an attempted assassination.

After pro-abortion protesters “got a tip” that Kavanaugh was eating at Morton’s, they “soon showed up out front, called the manager to tell him to kick Kavanaugh out and later tweeted that the justice was forced to exit through the rear of the restaurant,” Politico reported.

“We hear Kavanaugh snuck out the back with his security detail,” far-left group Shut Down D.C. said in a tweet, arguing that Morton’s “should be ashamed for welcoming a man who so clearly hates women.”

We hear Kavanaugh snuck out the back with his security detail. @mortons should be ashamed for welcoming a man who so clearly hates women.

Politico reporter Daniel Lippman confirmed the story Friday, reporting that a representative from Morton’s told him “Politics… should not trample the freedom at play of the right to congregate and eat dinner.’”

“Honorable Supreme Court Justice Kavanaugh and all of our other patrons at the restaurant were unduly harassed by unruly protestors while eating dinner at our Morton’s restaurant,” the spokesman said. “There is a time and place for everything. Disturbing the dinner of all of our customers was an act of selfishness and void of decency.”

… “Politics, regardless of your side or views, should not trample the freedom at play of the right to congregate and eat dinner. There is a time and place for everything. Disturbing the dinner of all of our customers was an act of selfishness and void of decency.”

The disruption of Kavanaugh’s dinner was met with mockery from leftist commentators, who derided the justice for helping to overturn Roe v. Wade and argued he had no right to eat at a public restaurant without facing harassment.

Jean-Pierre said the White House condemns intimidation and violence, but stopped short at condemning “peaceful” protests, including those outside restaurants.

“So these Justices, because protesters do not agree with an opinion… have no right to privacy?” Doocy asked.

“It’s the intimidation and the violence that we condemn,” she said.

Doocy to Karine Jean-Pierre: “Does the President think it’s appropriate for abortion rights protesters to intimidate Supreme Court Justices when they are out to eat?” pic.twitter.com/IAzZfY8jF1

Asked whether the Biden administration supported activists publicizing the private addresses of Supreme Court justices to encourage protests at their homes, Psaki said the government did not “have an official U.S. government position on where people protest.”