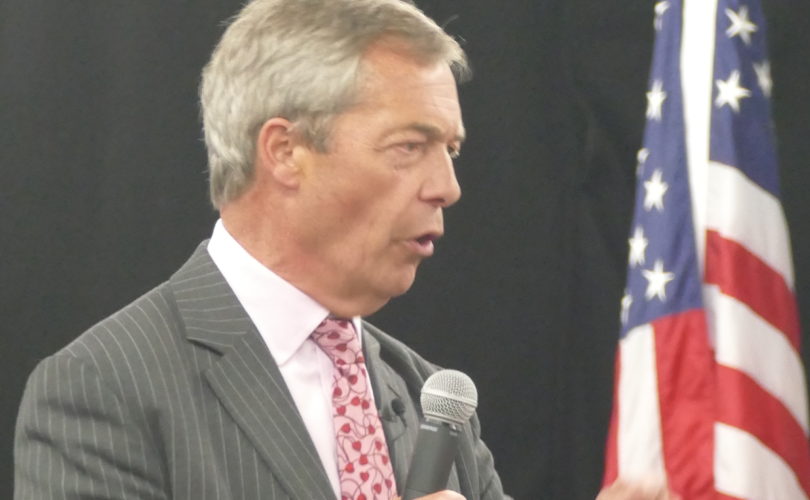 GRAND RAPIDS, Michigan, May 27, 2021 (LifeSiteNews) — Patriots in the key electoral state of Michigan received a morale boost earlier this month when they welcomed Brexit pioneer Nigel Farage and his “America’s Comeback Tour” to the DeltaPlex Arena in Grand Rapids, Michigan.

The tour, organized by the D.C.-based FreedomWorks, encourages grassroots Republicans and conservatives to stay active in local and state politics in the run up to the 2022 and 2024 election cycles.

Tammy Clark and Ron Armstrong of Stand Up Michigan were instrumental in getting Farage to come to western Michigan on May 14, even though the rally had not been included on his original schedule.

Michigan GOP co-chair Meshawn Maddock told LifeSite she’s a fan of Farage and appreciates the visit: “The way he postures and speaks reminds me a lot of President Trump. And there’s a kinship there. I have a feeling that’s why a lot of these people are here.”

Farage’s main message to the rambunctious, pro-Trump crowd of approximately 600 was that Western Civilization is under attack and that conservatives need to get mobilized.

“We’ve got an external threat of China, which we have to face up to, and we have an internal threat, which is cancel culture, woke culture,” he told LifeSite in an exclusive interview at the gathering. “At the heart of all of this, we’re up against Marxism, and it wants to destroy the Judeo-Christian culture about which our countries are built.”

“I had to come out to meet Nigel. He’s really stood up against the status quo. But we need to understand (that) in America … we’ve run trade deficits since 1973. Basically, we’re living off the laborers in other countries in order to subsidize our consumption habits. We need to bring these jobs back to America and be responsible for providing for ourselves as a country.”

Carra is a pro-life, first-term state representative. He recently announced he’s running to unseat incumbent U.S. Congressman Fred Upton, whose been in office since 1987. Upton, along with fellow Michigan GOP Congressman Peter Meijer (who represents the city of Grand Rapids but did not attend the rally), was one of ten Republicans to vote to impeach President Donald Trump earlier this year.

Carra has taken on a leading role in Michigan politics regarding the coronavirus. He recently authored HB 4791, which would outlaw discriminatory COVID measures like mask mandates from being implemented by the state.

Many attendees who spoke to LifeSite at the DeltaPlex praised the rally for its focus not only on freedom, but faith, as well.

“Without religion, without God, this country won’t ever get back on its feet,” Daniel Vasko, a local business owner who runs a trust-funding company, told LifeSite. “I’m glad they brought that up.”

“We won’t ever get the moral side of the equation right until we turn back to the true faith,” he added. “Once we do that, the enemies of this country — the big banks, multinational corporations — will be seen for what they truly are.”

The DeltaPlex has become a sort of refuge for Michigan conservatives in recent years. Owner Joel Langlois opened his doors in January 2021 for a rally that featured small business owners and elected officials calling on totalitarian Democrat Gov. Gretchen Whitmer to lift her ban on indoor dining in the state. Langlois also welcomed Trump to the DeltaPlex several times during his successful bid for the Oval Office in 2016.